Someone has been watching too much Sons of Anarchy.

The Marine 5: Battleground, the third film featuring Mike “The Miz” Mizanin as Jake Carter, pits the roving man of action against a vengeful biker gang.

The problem is while the ensemble cast of Sons of Anarchy were authentic in their roles it is hard to take Bo Dallas, Naomi, Curtis Axel and Heath Slater seriously as the Lost Legion motorcycle gang from the get-go. The Social Outcasts on wheels? Not the smartest casting decision ever. 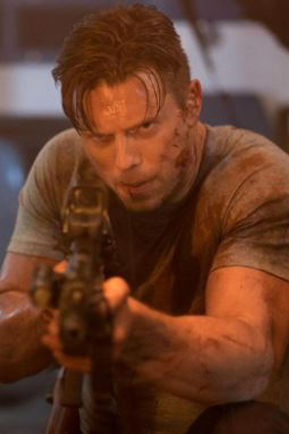 Carter, apparently a jack of all trades, has left behind his career as a security guard to become a paramedic. Once The Miz has taken a moment to save his real-life wife (Maryse as Ana) from a car crash, he and his partner (Anna Van Hooft as Zoe Williams) are called to an emergency at the underground parking lot of an amusement park that is closed for the season.

And we hope you like that dark, dingy underground parking lot because almost the entire film takes place there. You would think that with an amusement park as the backdrop that there would be some great action scenes using maybe a roller coaster or a Ferris wheel but nope, all we get is a clichéd gun battle in a haunted house and nothing more. 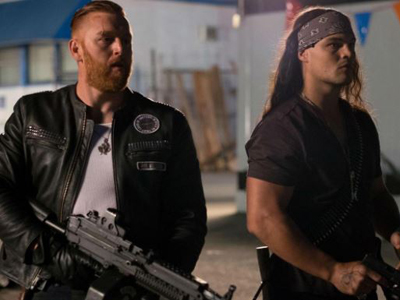 Back in that grimy, gloomy underground parking lot, Carter and Zoe come to the aid of ex-con Cole (Nathan Mitchell) and his deceased partner in crime Taylor. The duo assassinated a Lost Legion member and now the ruthless gang has tracked them down. Carter and Zoe end up in the middle of the mayhem giving Carter ample opportunity to use his lethal military training to punch a lot of jaws and kick a lot of ass.

The appropriately named Lost Legion at first cannot even find their prey, never mind make them pay for killing one of their own. It is not that Dallas, Naomi, Axel or Slater are horrible either. Dallas is very menacing in the lead role as Alonzo. Axel looks the part and is intimidating on-screen. He has a great wrestling/fight scene with The Miz that will make wrestling fans smile. Naomi too has a wicked battle with The Miz and Slater, well, he is kinda just there for the majority of the film. 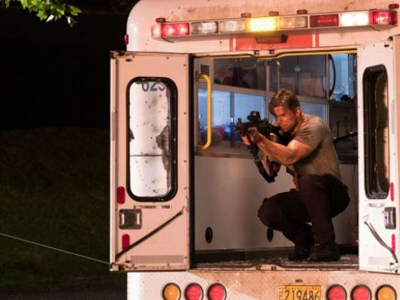 Everyone is terrific on their own but together, you cannot ignore or see beyond their weekly wrestling personas. Unlike The Miz, who has the ability to rise above his in-ring character, their squared circle careers hinder their authenticity collectively as the Lost Legion. The Miz and Bo Dallas carry the film even though their final showdown is unoriginal and ends as you predict it might right down to the involvement of an ambulance.

With this level of ominous on-screen villainy though it is clear that the WWE is not taking full advantage of what Bo Dallas (Taylor Rotunda) is truly capable of. He could be on the level of his real-life brother Bray Wyatt (Windham Rotunda) if he is given the right persona and the chance to really shine. 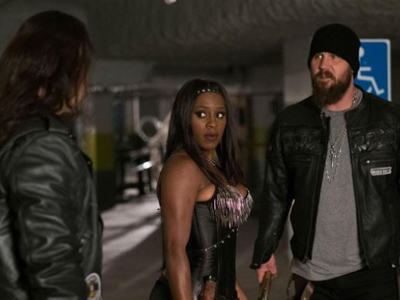 The Marine 5: Battleground is a missed opportunity in so many ways. The performances aren’t a letdown. Everyone is decent in their roles. It is just the plot and restrictive setting doesn’t give them much of anything to do except chase each other and brawl occasionally. There is no suspense. There is no tension. And that dark underground parking lot gets really old, really fast.