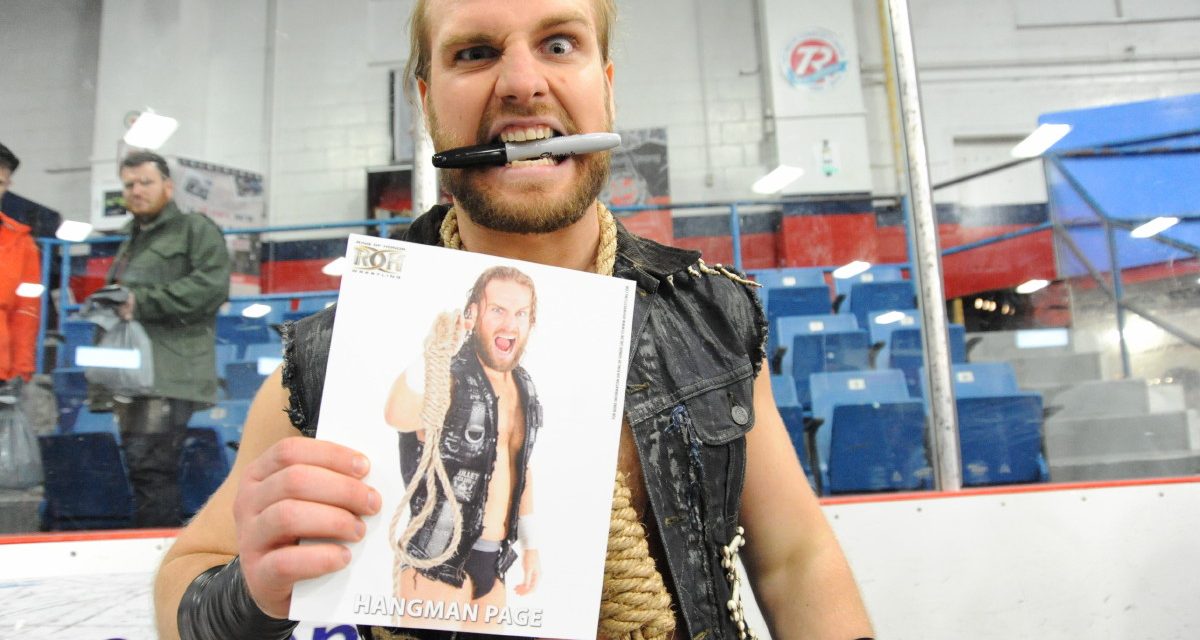 Like just about everyone in the pro wrestling industry, Hangman Adam Page is pretty excited by the coming weekend. Besides teaming with the Guerrillas of Destiny to challenge for the Ring of Honor six-man title belts, he’s also pretty pumped up to see some friends.

With WrestleMania 33 in Orlando, Florida, there are tons of opportunities for wrestling fans — and wrestlers — to see and experience so much, including Saturday’s ROH Supercard of Honor XI, down the road in Lakeland. 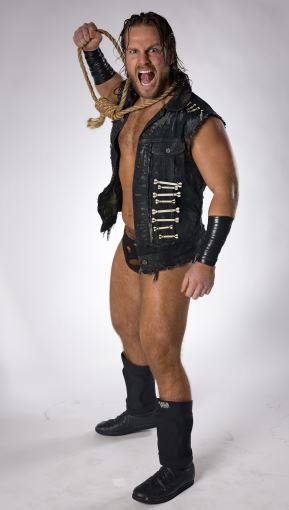 “It’s awesome,” Page told SLAM! Wrestling, “It’s more like the gathering of all of us friends, you know what I mean? All of the people that you’ve ever worked with before, anywhere, are there, all in one place. Getting to see people that you haven’t seen in a long time, that you used to be with all the time.”

Yet it’s not always easy to get time with your buddies. “Sometimes it’s weird, we go into these weekends and stuff, and there are these, I guess, barriers that are set up, not necessarily physical barriers, but institutional barriers, that will just get tore all down this weekend with everybody being in the same place.”

The ROH show at The Lakeland Center – Jenkins Arena looks like a pretty massive event too, if not quite on the scale of the other show at Orlando’s Camping World Stadium.

“I think it’s going to be the biggest crowd Ring of Honor’s ever had, live attendance,” he said. “That’s awesome for Ring of Honor, for me getting to be there as part of that. That’s just motivation to work harder the last few days leading up to it.”

Page said that there wasn’t really anything that he’s preparing for differently, but admitted that the stakes are higher — “Kind of the same as every weekend, just times 10.”

The bout for the six-man titles is one of four title matches on the card. The ROH six-man titles have not been around very long, and the current champions, Jay and Mark Briscoe and Bully Ray, are only the second-ever champions. Page figures that he and fellow Bullet Club members Tama Tonga and Tonga Roa — the Guerrillas of Destiny, who Bully Ray had a part in training — will do just fine.

“I know what to expect from the Briscoes, which is the same as always. I’ll to beat the hell out of them, they’re going to beat the hell out of me, and it will be good. I’ve got good chemistry with the Briscoes all the time,” he said. “I don’t really know what to expect out of Bully Ray, to be honest with you. He’s had one or two matches since he’s been here, he’s already six-man champion.”

The idea of Bully Ray in ROH, after all his years in WWE and even TNA is difficult for Page to process. “When I started off, I spent my first half of my time in Ring of Honor in The Decade, and we were a group of people, we were about was protesting these people who came from WWE or came from wherever else and comfortably made themselves home in Ring of Honor instantly, just walked right in,” he recalled, when asked about Bully Ray specifically. “Part of that is true, and part of that has stuck with me since then. So I’d be lying if I didn’t say … I had a bit of a chip on my shoulder about that.”

It begs the question — does someone like Bully Ray bring fans of the Dudley Boys to Ring of Honor? “I don’t think you ever answer that question until it’s over with,” considered Page. “But you might say, ‘Yeah, he’s just coming in taking somebody’s spot.’ But on the other hand, he may bring new eyes to Ring of Honor, to the product, to me, whatever, and you don’t really know the answer to that question until really his whole run here is over, when it’s all said and done.”

A couple of other TNA/WWE veterans are headlining the Supercard of Honor, with the Hardy Boys defending the ROH tag team titles against the Young Bucks, who are also in Bullet Club. Another Bullet Club competitor is Adam Cole, who is challenging Marty Scurll for the ROH TV title.

Page teased that there is far more to the Bullet Club storyline coming. “It’s been an interesting last couple of months with everything going on Adam Cole. He tried to fire the Young Bucks, who then told him that he’s not the leader, the leader is Kenny [Omega]. So there’s a little bit of tension there, and I’m not going to be so quick as to tell you who the leader of Bullet Club is. But I think there’s a little tension there.”

Cody (but don’t call him Rhodes) is also in Bullet Club, and he’s taking on Jay Lethal in a special bout, which Page had a hand in setting up: “Cody is actually taking my noose, we took the thing, untied it so we’ve got a rope. He’s got a cow bell. Him and Jay Lethal are having a Texas Bullrope Match.”

With members coming and going — hello Frankie Kazarian who joined Bullet Club only to turn on them and help Christopher Daniels win the ROH World title from Cole — there are often comparisons to WCW’s New World Order. But Page doesn’t see it. “When you think of it as a whole, you might get the feeling that they’re too many [wrestlers], or something like that — I can understand how you get that feeling. But I don’t really feel like that’s what it is, because there’s a representation in Ring of Honor, there’s a representation in New Japan, and those things aren’t totally exclusive. But for the most part, on a day to day basis, they are. I’ve been over to New Japan and some of the guys, like Tama and Tonga are coming over this weekend. But those people are generally kept in separate areas, so I think that helps us a bit.” 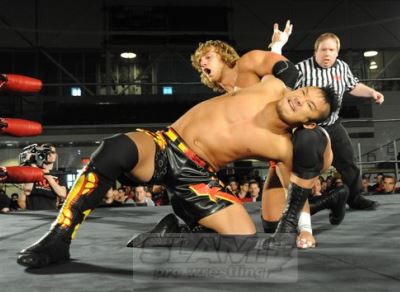 Adam Page stretches Kushida at a Ring of Honor show in August 2013 in Toronto, ON. Photo by Mike Mastrandrea

The opportunity to wrestle in Japan through the partnership of ROH/New Japan has been a boon to Page, who only been on a few tours “enough to get my feet wet” and relished everything about it. “I really love it, and I really love, man, the intensity of those tours. It’s every day, and if it’s not every day, there’s an off-day with a 10-hour bus ride. That’s it. That’s cool, getting to work that much. On my first New Japan tour, I probably wrestled more in those three weeks than I had almost the entirety of the other part of the year. It’s was so much.”

And there’s lots to learn, said the man who initially came out of Jimmy Valiant’s wrestling school in Virginia. “When you’re working in Japan and if people speak English, it might not be perfect. You kind of have to abandon that as a lifeline and you have to learn to just work with your body, and sometimes it just turns into a fight because of that. It’s a very real thing that makes you better over time.”

Page made his debut in 2008, and for a time, balanced being Stevie Woltz, teacher, and Adam Page, wrestler. He finally gave up teaching as of the summer of 2016. “I don’t miss having to wake up every day a 6:30 or whatever and go. But I miss parts of it,” he admitted.

His big break came in the 2013 ROH Top Prospect Tournament.

“I got my job from that tournament and I didn’t make it past the first round, and a lot of people who they picked up in those tournaments have been people that didn’t necessarily win — I mean, they pick up the winner, of course, but some of the people who lost out in the first round are some are of the good catches, and I was certainly one of those,” he said, thinking about the currently ongoing tournament. “So it’s a great opportunity, and this year, I think people like John Skyler, they’re killing it.”

The transition from the cleaner-cut Adam Page to the noose-carrying Hangman Page has been a pretty seamless one for the 25-year-old native of Virginia. He isn’t totally sure what is next, but he doesn’t lack for confidence.

“I don’t think anything is above me, honestly. Maybe it’s TV title contention, maybe it’s World title, maybe it’s the six-man titles this weekend, maybe it’s the tag titles, I don’t know. But I think a lot of that is going to depend on what happens with Bullet Club, with the stuff going on right now with Cole.”

WWE BUYING ROH?
We had to ask about the rumours of WWE purchasing Ring of Honor. Here’s what Adam Page had to say: “We like to know about that stuff. When somebody texted me about that the first day it came out or something, I didn’t really think much of it because a lot of times, something as simple as a quick ask about footage for a DVD or something like that, unless you hear that conversation, you can assume a lot of things about that. I didn’t really think much about it, and it kind of turns out that there wasn’t much to it. … Those kinds of things happen all the time.”