WrestleMania always makes me reflect on the early years of the greatest wrestling show on Earth. How could you see the event if you were not at the live show? Well, here are a few ways: pay-per-view was in its infancy and was not linked up to many houses; some folks who owned a satellite dish could sometimes get the feed for free; or you had to go to the local arena to watch the closed circuit show.

Since I didn’t have access to any of these options I had to wait a few weeks for the WWF’S Coliseum Video WrestleMania tape to show up at the local video store. I have always been a bit intense and obsessed with things I like. Wrestling was something I really liked. 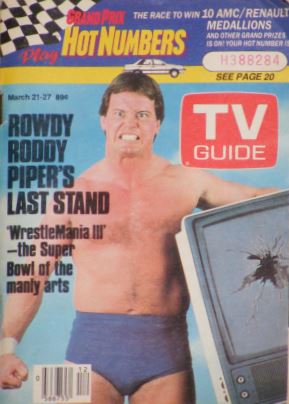 Heading into WrestleMania III I was struck by the realization that Roddy Piper would be in his last match. I was devastated. The man who convinced me that wrestling was cool was about to leave the sport and I couldn’t see his historic match with Adrian Adonis. What could I do?

The week before WrestleMania III at the Pontiac Silverdome, TV Guide put out a special edition with Roddy on the cover. The picture of Piper was a classic with him snarling at the camera as he held a TV with a shattered screen under his left arm. This guy was tough! The title proclaimed that this was “Rowdy Roddy Piper’s Last Stand.” I bought the issue and read every ounce of wrestling information it could give me.

Paul Budra wrote the piece and focused on the fact that wrestling emerged from tiny TV studios to stadium shows in just a few short years. Budra interviewed a few of the WWF’s stars for his story and they provided the great kayfabe quotes that would be expected in the 1980s. Piper tooted his own horn by pointing out that he felt he was the reason for the WWF’s success. “There are only so many Clydesdales pulling the Budweiser wagon,” boasted Piper. “Wrestling is popular because of me. I kicked Cyndi Lauper in the head, then I knocked the stuffing out of Mr. T. That led to WrestleMania I and II. You can’t take anything away from the athletes — especially me.”

The article had some other great quotes from WWF superstars. Bret Hart proclaimed that “No one can touch me.” Jesse Ventura predicted a turn in the sport a decade before it happened. Ventura explained that “The idea of good and bad wrestlers may be outdated. Now in wrestling you have personalities, and each personality has its own following.” Jake Roberts had a quote that made a big and warped impression on me as a boy when he said, “Without violence, the world would be boring.”

The TV Guide further fueled my interest in the big event, but I knew I could not see it in person. Then the WWF saved the day for me. At that time the WWF launched a special phone number you could call during the event to receive up to the minute results. Eureka! I decided that I would call the line every 15 minutes during the show so I could find out if my hero Roddy Piper was going out a winner. Sure I knew that each call cost $1.99 towards my parent’s phone bill, but like Piper, I was able to justify my actions.

They wouldn’t take me to events I liked or support my love of wrestling so I would just pay them back eventually with my earnings from delivering the daily newspaper. I remember sitting in my basement pouring over wrestling magazines trying to figure out if Danny Davis would be the weak link in the Hart Foundation’s match against the British Bulldogs and Tito Santana. When the time was right I would dial the phone number. My heart was beating loudly in my ears as I feared being caught by my parents.

Eventually I received the update that I needed and that was that Piper had defeated Adrian Adonis in his “final” wrestling match. I went to bed happy that night. About four weeks later I was given the phone bill and asked to explain the charges. I denied, denied, denied and then handed over some cash to my parents. It was worth it.