Catching up with Santino Marella

When Epilepsy South Central Ontario announced that Santino Marella was going to be involved in one of its upcoming events, it shouldn’t have come as a surprise to anyone. Like many WWE Superstars, Santino Marella — real name Anthony Carelli — is the kind of person that gives back to the community that supported him. After all, without an audience cheering you on, you can’t succeed in the colourful world of pro wrestling.

Santino has worked with many charities over the years, and continues to do so to this day. While in Tampa, Florida, a popular residence for WWE Superstars, Santino collaborated with the local chapter of Joshua House, a charity that provides aid and services to neglected and abandoned children. Given his natural comedic talents and ability to make anyone smile, this seemed like a perfect fit for him.

Of course, Santino, much like the WWE he used to wrestle for, also thinks on a larger scale. He has also partnered with both World Vision Canada and Jumpstart Canada, both of which are charities devoted to helping improve the lives of children. 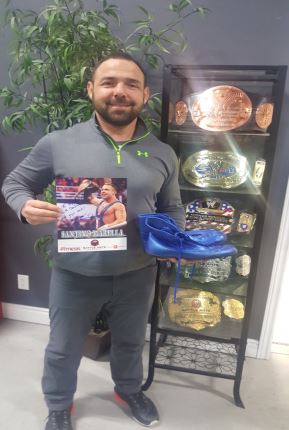 It was because of this dedication to helping others and giving back that Santino got interested in working with Epilepsy South Central Ontario. “I was drawn to it because I saw that it was a great cause. I researched the charity and what it’s for, and thought that it was definitely something I wanted to be involved with,” he said. Though he can’t be there in person, he did donate a pair of wrestling boots and some signed photos that were to be auctioned off at the fifth annual Purple Gala.

To help promote Epilepsy South Central Ontario’s Purple Gala, Santino spoke at length during a recent interview about various subjects, ranging from his involvement with various charity organizations to his wrestling career.

The voice of Anthony Carelli is very different from that of Santino Marella. While the on-screen character sounded like that of a man straight out of Milan, Italy, this one clearly belongs to one from the Greater Toronto Area (GTA), with little hint of Italian in it. In those first few moments, it was clear how well Santino perfected his accent for his on-screen character.

The man who spoke over the phone was just like the character he played, only without the accent. One can still hear the cheerfulness, joy, and excitement he has for pro wrestling, even though he recently underwent a third round of neck surgery and has retired from in-ring performance. Though his in-ring days are behind him, Santino’s passion for wrestling hasn’t diminished whatsoever.

Santino was candid about his WWE career, and was delighted to go into detail about the side of wrestling fans don’t normally get exposed to. “I was scripted at first, and the guy that wrote most of my scripts was Brian Gewirtz,” he said. “But over time, they gained confidence in me, so they loosened the grip, which allowed me to come up with my own stuff. By that point, for promos they’d give me a bullet point and they’d ask me to say it in ‘Santino’s way.'”

This led to many hilarious performances, Santino’s own favorite, the one in which Santino stole Jerry Lawler’s sandwich.

Santino’s gratitude and willingness to give back to those that helped him was a theme that kept coming up throughout the interview. Despite being a mid-card act through and through, his popularity kept growing over time. Eventually, it reached a point where he getting some of the loudest reactions out of anyone on the WWE roster.

This was proven during the 40-man 2011 Royal Rumble match. Surprisingly, Santino managed to reach the final two in that coveted match, with only the mean Alberto Del Rio standing in his way. When he realized he was moments away from winning and began a premature celebration, the audience erupted in cheers. Sadly for Santino, it wasn’t meant to be, and Del Rio eliminated him in a last-minute reversal to win the Rumble match.

Thinking back to that moment, Santino kept laughing. “As for the 2011 Rumble, that was a lot of fun because we almost swerved the entire audience,” he said. For one brief moment, he had everyone watching him believing that he could win. It was a moment he’ll never forget.

This was as high as his career would go, but that didn’t stop him from doing what he could to help others. This generosity was first shown when he was paired with relative newcomer, Emma. “Partnering with her was done to help her out and bring her to the main audience. There was a big difference for her between the NXT audience and the main roster. The audience in NXT is so gracious and giving. They give so much noise that they give a false impression of what works and what doesn’t. So she was over there, but not so much on the main roster.” Paired with Santino for a time, Emma’s career gained some momentum.

After he was released from WWE, Santino had a brief stint with comedy wrestling promotion Dramatic Dream Team (DDT). During that tenure, Santino won the DDT Ironman Heavymetalweight Championship, the granddaddy of all joke titles. When asked about what this was like, Santino explained that he only held the belt for two minutes, as he lost it to another wrestler shortly after winning it. The reason for that, he said, was so that that wrestler that beat him could become a bigger star by beating an already-established name like Santino.

Santino’s life after WWE seems to be just as hectic as his days on the road. He mentioned that he was about to start a three-hour drive towards the northern part of Ontario, though to him, this wasn’t a big deal. After all, he had spent a great deal of time crisscrossing the United States (and the rest of the world) for the better part of nine years anyway.

“There was something funny happening every day,” he said of his days on the road. “I rode mostly with Brodus Clay, and we did whatever we could to make the drives more fun. The conversations we had were always funny and light-hearted, so it was good times all around.”

There had long been this rumor among some wrestling fans that the actual wrestling part wasn’t even the hardest part of a wrestler’s day. Santino confirmed this, describing what he called “an average day”:

“I’d get to the airport at 6 a.m., and then get to whichever city we were in that night at around 1 p.m. From there we would need be in the building for the show around 5:30 p.m., so between the time we arrived and show time we’d have three to four hours to get important stuff done. Usually that meant meeting up with my riding partner, getting a bite to ear, get a workout in, stuff like that.

“At 5:30, we’d get to the building to get ready for that night’s match, do warm-ups, and then go do the match. Once the show was over we’d drive to the next town, which was usually up to four hours away, so normally we’d get to that town by 4 a.m. Then we’d have to be in the building by 5 p.m. the next day.”

But Santino doesn’t travel to wrestle anymore. He tours the province to promote his latest project: Battle Arts Academy, an enormous training facility for anyone interested in fitness, mixed martial arts, and of course, wrestling. Santino designed this facility to be a one-stop shop for MMA fighters and pro wrestlers, while also offering different kinds of programs for people that just wanted to get into shape. He’ll often tweet out photos of old friends from WWE dropping by to train at his gym.

Santino still keeps busy these days, juggling multiple responsibilities simultaneously. Not only does he have his Battle Arts Academy to manage and promote, and multiple charities to work with, but he also takes the time to re-visit WWE in one way or another. He can also be seen on The Score’s program, WWE Aftermath. He mentioned that he still DVRs the WWE product, and that it’s fun to watch the program to see where it’s going.