“Outlaw” Ron Bass, who wrestled from 1971 to 1989, and had a prominent run in the WWF, has died in Florida. He had been hospitalized last week with an apparent burst appendix, and died on Tuesday.

“I just did it the hard way, starting independents. My first area that I really worked was Mobile, for the Fields brothers,” he said in a 2006 interview. In the Gulf Coast territory run by the Fields, he was dubbed Ron Bass, a brother or cousin to the likes of Sam Bass or Don Bass, along with the mastermind Ma Bass.

He had major runs in Georgia and in Florida — especially fighting against Barry Windham, as well as in Oregon. “After Portland in ’77, it was all top stuff,” he said. In Jim Crockett Promotions he was paired with Black Bart as a cowboy tag team known as The Long Riders with JJ Dillon as their manager.

Bass was one of the early stars on the WTBS out of Atlanta that was the first “superstation” in the United States, allowing the wrestlers on Georgia Championship Wrestling to reach a huge audience.

“Man, that’s some business that we did when we started doing that Channel 17. That was the first national television that was done. Back then, they still had the gentleman’s agreement. The only way we went national was where there wasn’t nobody having a promotion going. We went to Michigan, West Virginia, places like that, Ohio Valley,” recalled Bass. “”We went in there and they knew exactly who we were, but they’d been pumping in there for a long time. We were doing sellout business in Charleston, West Virginia, Huntington, West Virginia, Columbus, Ohio, Canton, Dayton, Battle Creek, Lansing. It was sellout business.”

One of his greatest opponents was “Wildfire” Tommy Rich. “Tommy and I had many battles over the North American title, and drew a lot of money with it,” said Bass.

In Portland, Bass went for two tours, one as Bass and on the other as Sam Oliver, an idea of booker Dutch Savage. “That was Savage’s idea, which worked out good. I should have kept that. The S.O.B. is what they called me up there. The only reason that I didn’t do that was at one point I was partners with Sam Bass in Tennessee, who got killed in a car wreck. I didn’t feel right about doing it.” 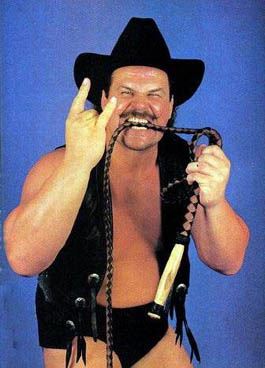 With the WWF expanding, and with big bodies in high demand, he was a natural choice to join the national company and was allowed to keep his previous gimmick essentially: a cowboy hat, long coat, a bullwhip named Miss Betsy, and a handbar mustache that he had grown after seeing Roger Kirby’s masterpiece ‘stache.

In WWF, he was primarily a midcard heel, feuding with the likes of Brutus Beefcake, Junkyard Dog, Hillbilly Jim and Sam Houston.

“What I personally think made him a great performer is that he was believable he had an aura of a bad guy he looked the part and you believed he was a bad guy even though in real life he was a great guy and will be missed,” said veteran wrestler Bob Cook, who watched and wrestled Bass in Florida, and then reconnected with him at regular legends lunches in Tampa. “He makes most of the so called bad guys today look like pretenders.”

In Japan, he often teamed with Stan Hansen, and the duo held the All-Japan International tag team titles. In the 2006 interview, Bass marveled at Hansen’s pacing. “I knew Stan for many, many years, in and outside the ring. Stan was one of the people I call a friend. He was just a typical Western wildman, in and outside the ring. I used to laugh at him. I thought he was blowed up the first two minutes, but then he never stopped, same pace, he’d be out there for an hour. I’d say, ‘Dang, boy, how you do that?’ He’d be almost dying in the dressing room, but you would never know that. Stan was just full of energy, full of excitement, just a big, old raw energy raw.”

He knew when his time was up as a professional wrestler.

“When I quit in 1990, I just quit. I had a college degree, I didn’t sit back and ‘poor, pitiful me, what am I going to do next?'” he said. Armed with a Bachelor’s of Science degree from Arkansas State University, Bass got involved in various businesses. “There was life after wrestling for me. A lot of them can’t cut loose. It’s like a drug addict — if you don’t get away from it, you’ll never get out of it.”

After years and years on the road, which included a stretch of 104 straight days away from his home, the constant nagging injuries left the veteran with no choice but to hang up the bullwhip and face life after wrestling. For Bass, retirement meant returning to his home in Tampa, Fla., where he found religion, golf, and a place to put his to work.

One of his post-wrestling jobs was as a sales rep for a building materials company.

Besides the Tampa legends lunches, Bass was an occasional guest at fan fests. He recently took a part in a film, Silent Times, where he plays a football coach from back in the 1920s. Fellow wrestler Brian Blair is also in the silent film, scheduled to be released in 2018.