It is the first stop on the road to WrestleMania. From its humble beginnings in Hamilton, Ontario, Canada, to this year’s extravaganza taking place in the 65,000-seat Alamodome in San Antonio, Texas, the Royal Rumble is one of wrestling’s premiere events. 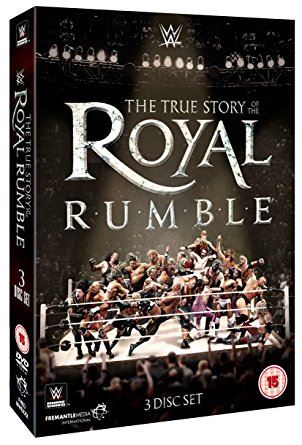 The True Story of Royal Rumble three-DVD set goes behind the scenes delving into not only into the history of the event but the people behind it.

The brainchild of Canadian wrestling legend Pat Patterson, the Rumble began as a one-off event broadcast live for free on the USA Network in 1988 from Copps Coliseum (now the FirstOntario Centre). The first disk, a one-hour documentary, celebrates the Rumble’s origins by not only talking to Bret Hart, who along with Tito Santana, were the first two ever Rumble entrants but also the eventual finalists “Hacksaw” Jim Duggan and one of my all-time favourites, The One Man Gang.

“That is the one big feather in my cap. I have never won a world championship. I was never Intercontinental Champion. I was never a tag team champion but I won the first Royal Rumble, tough guy!” says Duggan on the DVD. 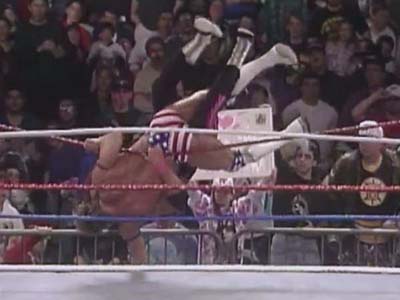 The evolution of the Rumble from only being bragging rights for the winner to the victor being granted a shot at the world title is detailed as well. WWE President Jack Tunney turning the Rumble format on its head by stripping Hulk Hogan of the WWF World Heavyweight Title in 1992, declaring the title vacant and that the winner of the Rumble would become the new champion was a decision that stunned and excited fans. From that point on, the Rumble winner would always be awarded a World Heavyweight Title match at WrestleMania.

The Rumble event has been linked to controversy, scripted or not, over the years and the documentary doesn’t shy away from that. Batista talks about he and John Cena botching the ending of the 2005 Rumble.

“I look over and I see him (Vince McMahon) coming down the aisle and he’s got that goofy walk and he’s bright red and yelling. I was like … God, I am so gonna get fired,” says Batista of the infamous event, grateful that he and McMahon could have a laugh about it afterwards.

Roman Reigns and Batista chat extensively about being utterly jeered as Rumble winners.

“I think fans are so passionate about who wins the Royal Rumble because that is the guy who is going to main event WrestleMania,” says Randy Orton giving his perspective. “When your guy wins it is huge and when your guy doesn’t win, it is sometimes even huger.”

One of the things the Rumble is known for is its surprise entrants and the DVD lets fans in how those secrets are kept from not only journalists and fans but the superstars themselves. Chris Jericho, A.J. Styles, Edge and Bubba Ray Dudley describe being driven around in cars with tinted windows to the event and once arriving at the arena being kept on a separate tour bus backstage until it was time for them to enter the Rumble match. 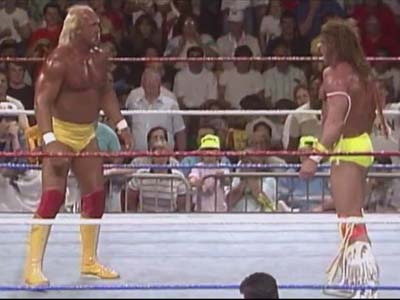 The Ultimate Warrior and Hulk Hogan are more than ready to rumble. Photo Courtesy: WWE.

While the documentary does a good job detailing the history of the Rumble, it ignores the “True Story” of why it was created in the first place which was to win the on-air battle against and undercut Jim Crockett Promotions and the National Wrestling Alliance (NWA). The first Royal Rumble was purposely aired on free TV and on the same night as the NWA’s pay-per-view, The Bunkhouse Stampede. The Stampede was a battle royal in which the competitors could wear street fighting gear and bring objects like chains, whips and in the case of the Road Warriors, deadly spikes, to fight with. It was often a bloody and brutal affair that took audiences away from the WWE. The Royal Rumble, like WCW’s Clash of Champions, was initially a centrepiece of the rivalry between the two promotions and it is a shame that story is absolutely ignored in the documentary.

The second and third disks contain mostly matches that are briefly mentioned in the documentary and some Rumble bouts, which is fair enough but some really don’t best represent the Rumble itself. The Rockers versus The Orient Express and The Ultimate Warrior versus Sgt. Slaughter at the 1991 Rumble or Charlotte versus Becky Lynch at the 2016 Rumble, aren’t matches anyone thinks of when they recall their favourite Royal Rumble memories. 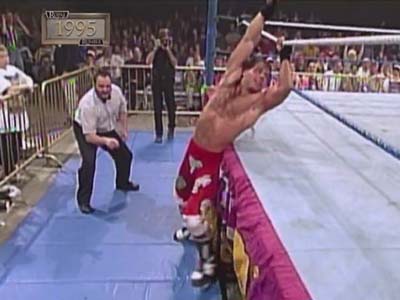 Although it does side-step the real story, True Story of Royal Rumble is a decent collection that brings back a lot of great memories. It is just a shame that it couldn’t have been more of a definitive collection with maybe snippets of the greatest moments, exits, surprise entrants and record-breaking performances so that the “True Story” could be told.