Pittsburgh loves Banks, Jericho & New Day but wants nothing to do with Reigns at Roadblock

PITTSBURGH – As a professional wrestling market, Pittsburgh is transforming. It’s not quite as contrarian or maddening as Philadelphia (for shame the thought), but when the WWE comes to town, it’s hard to guess what the masses will support.

At Roadblock: End of the Line, United States Champion Roman Reigns was almost booed out of the PPG Paints Arena. But there’s no need to get ahead of ourselves.

Pittsburgh has long been a hotbed for professional wrestling. In some circles, Bruno Sammartino is still considered the greatest athlete to come from the region, regardless of the sport. The Independent wrestling market is strong, with Demolition, Ricky Steamboat and Bill Apter headlining a show three weeks prior to Roadblock. Heck, Chris Jericho took time out of a Steel City Con appearance in Monroeville, Penn., to guest ring announce a match at a small town’s promotion 16 miles south of Pittsburgh just the weekend before he was set to take on Seth Rollins in the big city. 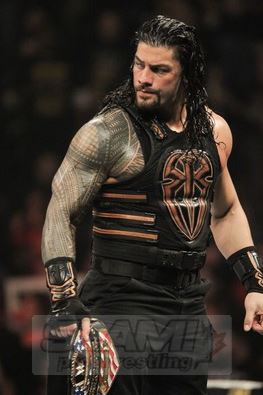 Fans arrived at the former Consol Energy Center in force Sunday night. They brought signs — the best one stated that the Network PPV Roadblock event was sponsored by PennDOT, the state’s much-maligned road maintenance wing. Dozens of grown men carried the various WWE title belts over their shoulder, and some carried toy replicas. There were many women with multiple children at the show, proving that the product doesn’t just pander to the men with belt facsimiles.

One of the first big pops of the night was for Bayley who showed up at the temporary stage to do some pre-show analysis with the red, backless-gown wearing Renee Young, and a suited Booker T. Fans buzzed for Booker T, and the crowd chanted “New Day Rocks” along with a fan who smuggled in some sort of horn.

The New Day had signed autographs and snapped photos earlier in the afternoon at a toy department store, and many fans made a day out of the whole WWE schedule.

Fans of the WWE in Pittsburgh aren’t probably much different than counterparts in other cities. There’s most likely another guy in another city with a white, WWE logo-bedazzled sport coat. Another metropolitan area might have a trench-coat wearing pretend superhero, with beer in hand, mask and hardhat.

One of the night’s first crowd-pleasing moments was when Corey Graves was introduced for the announce team. Graves is a Pittsburgh native who wrestled independently in the region for years as Sterling James Keenan. It’s difficult to gauge the fans’ reaction to Byron Saxton, because they were booing Michael Cole loudly and for so long.

Former WCW announcer, Pittsburgh radio personality and Charlotte fan Mark Madden could be seen holding court with anyone near him in the front row. Later, a number of Pittsburgh Steelers, including star running back Le’Veon Bell, fresh from a 24-20 victory over the Bengals in Cincinnati, arrived to Madden’s left.

The fans were ramped up again when it was announced that the WWE’s Smackdown brand would return to the PPG Paints Arena on March 14.

Before the first match, fans talked about a number of things. One overheard conversation discussed the fact that they attended another pay-per-view at Madison Square Garden. They didn’t know what it was. Another member of the party stated it was a WrestleMania. Later this same group discussed how one of them had never heard of Randy “Macho Man” Savage.

Then the event began.

The Ravishing Russian, Lana, received a loud ovation as the first WWE Raw Brand Superstar to hit the stage. Wrapped in a black dinner number and high heels, Lana is a stunner. Cheers turn to jeers when she introduces her husband, the Bulgarian Brute, Rusev.

Rusev’s opponent Cass and his tag team partner Enzo come out to their usual, fan-friendly entrance. It’s infectious to chant “How you doin’?” towards the duo. Enzo talks for an excessively long time and slaps on a red reindeer nose before this dark match takes place. The fans are solidly behind the seven-foot Cass and Amore. After the match ends with a Rusev victory via count-out, fans are disappointed that Enzo didn’t dance his little shuffle.

Next, the ring crew hustles to rebrand the ring. Meanwhile, an in-house TV commercial plays on the Jumbotron. The fans erupt in relieved applause when a face-painted and costumed Sting appears on the ad, pimping a Teenage Mutant Ninja toy with his likeness. Pittsburgh has always been favorable to the Stinger and it’s good to see he remains in the WWE fold.

Pittsburgh also loves The New Day. When Big E makes his boisterous introduction, the arena is rapped. New Day touts their recent accomplishment of besting Demolition’s ages-old WWF record for tag team resilience. When challengers Sheamus and Cesaro arrive, the capacity crowd is firmly behind the Swiss Superman, but not so much for his tag team partner. It had long been rumored that this was the match in which New Day could surrender their belts. When it did happen, the fans cheered well for Cesaro, who like Graves, spent many a night toiling on the independent scene in and around Pittsburgh. When Cesaro hugged all three members of The New Day, the fans were all in for that moment.

The fans were into Sami Zayn’s high-energy, Mighty, Mighty, Bosstones-influenced ring music, and the storyline with Braun Strohman. Zayn would win if he could last an eternity (10 minutes) against the 385-pound monster. During the match, Mick Foley arrived with a towel in hand to throw in if Zayn continued to get walloped without defense. Foley, who trained about an hour north of Pittsburgh decades ago, is still popular. When Zayn technically won, the fans were very happy for him.

Chris Jericho was out next. At 46, he is one of the main roster’s elder statesmen. He’s reinvented himself dozens of times, and fans in Pittsburgh love him regardless. It was difficult to tell who was supposed to be the fan favorite in this match with Seth Rollins, because the loudest ovations came for the master of the Lionsault. Even though Rollins won, the fans wanted to root for Jericho.

Next up was a lengthy ring alteration before the Triple Threat Match between The Brian Kendrick, TJ Perkins and Cruiserweight Champion Rich Swann. Only the most loyal fans in attendance had skin in this game. Reactions were light throughout the athletic match. Swann retained and stood in the ring as explosions announced Neville’s return. The Man That Gravity Forgot raced into the ring and attacked Swann and then Perkins, signifying a turn. The fans chanted “Thank You Neville,” as his star power adds to an otherwise lackluster division.

The 30-minute Iron Man Match for the RAW Women’s Championship was the highlight of the night for many fans. Women could be heard buzzing about how “hot” Charlotte or Sasha Banks were before the bout. Others simply liked the athleticism and/or tale of these two competitors. The PPG Paints Arena crowd clearly favored Banks. Sasha had attended a Pittsburgh Penguins contest Friday night at the very same arena. She wore a personalized “Boss” hockey sweater assuredly provided by Penguins Head Equipment Manager Dana Heinze, who is well-known around town for being a wrestling fan. At the seven-minute mark of the match, Sasha scored a pin on her challenger. The fans were into it. At 10:30 left in the match, Charlotte scored tying pin, and the crowd booed hard. Well into the 30-minute match, the fans did chant “This is awesome.” Then they tired. With six minutes remaining, Banks had her first lead of the night and the reaction was positive, but subdued. With one second left on the clock, Banks tapped out for the tying submission. It’s interesting to note that the WWE ring announcer didn’t know how to rule that call.

The referee deemed that there had to be a winner, so the match was restarted with a Sudden Death Overtime. After a number of submission moves, Banks tapped out to the Figure Four. Somewhere along the line, her nose was busted open and medical attention rushed in. The emphasis was on Charlotte, who preened just like her famous father. Mark Madden, who helped edit Ric’s 2004 book and remains a good friend to the entire Flair family, blew kisses Charlotte’s way.

Then Roman Reigns emerged. At the Royal Rumble at the same facility in 2014, Pittsburgh fans wanted Daniel Bryan to win. No one else was acceptable. When Rey Mysterio, Jr. was introduced as the 30th participant in that match, someone somewhere assuredly got punched in the lip from frustration. When Batista and Roman Reigns were the last wrestlers in that contest, the frenzied crowd wanted the then-Shield member. If they couldn’t have Bryan, they would grumble and settle for Reigns. Then Batista won and the arena nearly burned to the ground. One fan rode Batista so hard, that the winner could be seen flipping the fan on while PPV cameras still rolled. CM Punk quit wrestling days later. It was that bad.

Now, the boos for Reigns were historic. You could see the disbelief in Roman’s face. The fans preferred Kevin Owens. He ate it up. Without question, Pittsburgh fans could empathize and relate with a pot-bellied wrestler who critics say has no reason being “the man.” A pot-bellied fan with a Hulk Hogan t-shirt and replica belt sat no more than 100 feet away from the champion from Canada. When Chris Jericho interfered in the match, the fans turned their attention to him. When Seth Rollins came out to settle the score, fans kept their attention on Jericho, and to a lesser extent Owens.

At least no one flipped off a fan while on TV.