HAMILTON, ONT — As a parent and wrestling fan I have been reluctant to share my enjoyment of wrestling with my children. There are the usual factors such as violence, or perhaps some ugly language from the wrestlers or crowd, but at almost 11 years old, it was time to take my daughter, Avery, to her first live wrestling card.

As a result of writing for SLAM! Wrestling my daughter has met many of wrestling’s legends such as Bret Hart, the Killer Bees, Demolition, Ric Flair, Nikolai Volkoff and Jaxon Jarvis. In fact, at the age of six, after waiting a long time for Hart she said to Hart, “What is the big deal with this Hart guy anyway?” Bret could only shrug and smile. 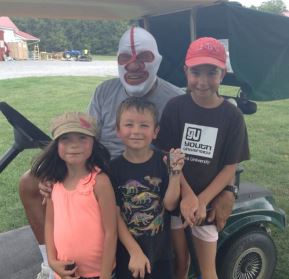 But until Monday night, she had only ever watched three matches on TV. I let her watch only the classics, no Mantaur for her. So, with Hulk Hogan and Mr. T versus Roddy Piper and Paul Orndorf, British Bulldog against Bret Hart at Summer Slam and the WrestleMania masterpiece of Ricky Steamboat defeating Randy Savage as her points of wrestling reference we headed off to Hamilton, to watch the WWE’s holiday tour.

The half-full First Ontario Centre made up for the lackluster attendance with a lively crowd that cheered for the good guys and booed the bad guys. Avery was amazed at the crowd, the signs and the noise. Here was a place where she could be loud and nobody told her to be quiet.

The card was a solid performance by the Smackdown crew. American Alpha started the show with an entertaining victory over Breezango. Tyler Breeze and Fandango spent a majority of the match cutting Chad Gable off from his partner Jason Jordan. The smart tag team tactics by the bad guys had the crowd begging for Jordan to get the tag. The crowd began chanting “We want Jordan!” over and over with Jordan imploring his partner to reach him. When Jordan finally got the hot tag, he cleaned house and Alpha scored the victory. Avery marvelled at the athleticism of the wrestlers, but was still reserved.

Next up was Luke Harper against Mojo Rawley. Harper is a master of waiting and reacting to the crowd in a methodical and spooky way. When some kids in our section yelled for him to take a shower he slowly turned to look in their direction. He held his gaze for an uncomfortably long time and the children stopped bullying the Wyatt family member. When Rawley hit the ring he showed his usual enthusiasm to which my well-spoken and voracious reading daughter looked at me and said, “That Mojo certainly is hyped.” After an entertaining match Harper got the pin.

The women’s championship match was a fatal four way with Nikki Bella, Nattie Neidhart, and Carmella trying to dethrone Alexa Bliss. Avery decided that Neidhart was her favourite because she is Bret Hart’s niece. After a quick, but entertaining battle Bliss retained her title. I do think Bliss needs to work on her repertoire of put downs as all she could muster was “shut up” to the fans who lined the runway during her entrance and exit from the ring.

The match of the night was a non-title affair as Intercontinental champ The Miz took on Apollo Crews. Upon Crews’ introduction Avery jumped up and to see the superstar. She sat down and was a little disappointed. When asked why she said she thought the announcer said Apollo Creed was fighting. We watched Rocky II the other night and Creed was on her mind.

The Miz whipped the crowd up with his verbal skills. The Hamilton crowd was incensed when Miz channelled Rick Rude and asked for all of “You out of shape, Hamilton sweathogs need to keep the noise down…” and of course the crowd reacted with venom for the champ. Avery turned to me and said, “Daddy, we’re not from Hamilton so that doesn’t count for us.” The match was fun and tight with both wrestlers feeding off of the crowd’s enthusiasm. Avery really got enjoyed this match and The Miz because of his confidence. In fact, at the end of the night, she decided that The Miz was her favourite wrestler on the card. She did appreciate Crews’ athleticism and how acrobatic he was. Crews picked up the win over the champ.

After intermission Heath Slater and Rhyno defeated The Ascension and the Vaudvillans in a match that was lackluster in crowd response.

Very soon the crowd was on their feet as Baron Corbin took on Kalisto. The crowd of young kids chanted for the acrobatic luchador throughout the contest. There was an interesting side note from the match. Baron Corbin is going to be a star with the teenagers to older fans. A low chant was steady all through the match for Corbin and those fans buy the merchandise and tickets for the little fans. Corbin never looked to outshine his opponent and worked a good big man versus little man match.

The main event of the evening was a Hamilton Street Fight with Bray Wyatt and Dean Ambrose. Both wrestlers were cheered during their entrances. My friend Craig commented that wrestling fans seem to be trained to react in certain ways and that it appeared to be an interesting subculture when the cell phone lights went on for Wyatt. The match was a let-down. The brawl was uninspired. Avery, who had been upbeat and in to every match didn’t even react to the combatant’s use of foreign objects. Why you need to find a table under the ring during a fight is a mystery to me. The crowd liked that Ambrose won, but quickly began leaving even when Ambrose was celebrating in the ring. You might say that it was because it was a Monday night and people just wanted to get home was the reason for that reaction. I don’t think so. I have been to many WWE events over the years and regardless of the day of the week I have never seen the main event victor so resoundingly ignored. Ambrose is talented — as is Wyatt — but this showed that they were not connected with the crowd. Perhaps The Miz should have been the main event?

Overall the show was a lot of fun! Avery said that it was “upbeat, loud and cool to watch.” I certainly enjoyed sharing the evening with my daughter and showing her the fun that wrestling is all about. I am thankful that the WWE gave my daughter and me a chance to create a great holiday memory.

Caleb Smith had a lot of fun at the show in Hamilton. Craig Sutton was a deep thinking cultural observant who continuously told me who he thought he could beat.