As Bobby ‘The Brain’ Heenan, wrestling’s all-time greatest thinker, is fond of saying: “A friend in need is a pest.” At RoadBlock, the final WWE pay-per-view of 2016, it was all about the trials and tribulations of friendship. Chris Jericho and Kevin Owens punked the WWE Universe while The Shield reunited for the hundredth time on WWE television. The Hounds of Justice? The Hounds of Monotony is more like it. 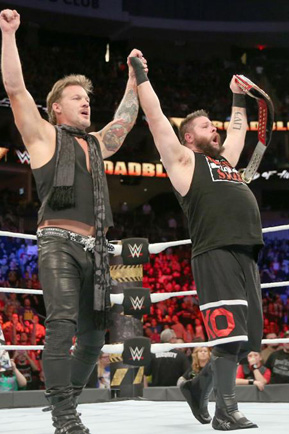 With their friendship apparently on thin ice, besties Kevin Owens and Chris Jericho were at odds during the entire show as a desperate Owens tried to apologize repeatedly only to be rebuffed by Y2J, repeatedly. You know things are beyond repair when Jericho throws away the gift of an expensive and festive holiday scarf. Bah, humbug!

The bromance imploded when Owens made his presence felt during Jericho’s match with Seth Rollins. Rollins knocked KO off the apron and Jericho yelled at him to just leave. Throwing his hands up in the air, a dejected Owens split the scene and Jericho would go on to lose minutes later.

When Jericho interfered in the Roadblock main event giving a Codebreaker to champion Kevin Owens instead of challenger Roman Reigns, it seemed like the camaraderie was over or…was it? Once Roman Reigns was disqualified by the official because of Jericho’s outside interference, Y2J and the Prize Fighter smiled and hugged in the middle of the ring as a stunned Reigns and WWE Universe looked on. The fights, the falling out, the arguments, were all one big ruse to make sure Owens left Pittsburgh with the WWE Universal title.

Owens and Jericho weren’t able to savour the success of their deception for too long. The WWE resurrected the stale and decomposed Shield angle once again. Rollins stormed the ring as Owens was speared by Reigns on the floor. Rollins Pedigreed Jericho and then…you guessed it…Reigns and Rollins powerbombed Jericho and Owens through separate announce tables.

It might have been cool the first time. It might have been fun the second time but now reunifying The Shield every week is about as interesting as a sixty minute Iron Man match between Bone Soldier and Toru Yano. If you don’t get the reference, you need to do your wrestling homework.

Despite ending in shenanigans, Owens versus Reigns was the best match on an otherwise unexceptional pay-per-view. It is not that any of the matches were bad, they weren’t. It is just none of them were particularly memorable. There just wasn’t a whole lot of drama or excitement on display even in what should have been some riveting encounters like the Iron Man match and Jericho’s match with Rollins. It could be that the rematch well could be drying up. That the limitations brought upon by the brand split are finally beginning to take their toll with recycled finishes, recycled matches, recycled spots and recycled feuds.

The next WWE Network pay-per-view is The Royal Rumble on January 29th.

Roadblock: End of the Line Results

Pittsburgh loves Banks, Jericho & New Day but wants nothing to do with Reigns at Roadblock