The Cruiserweight Classic: A champ is crowned by the King of Kings 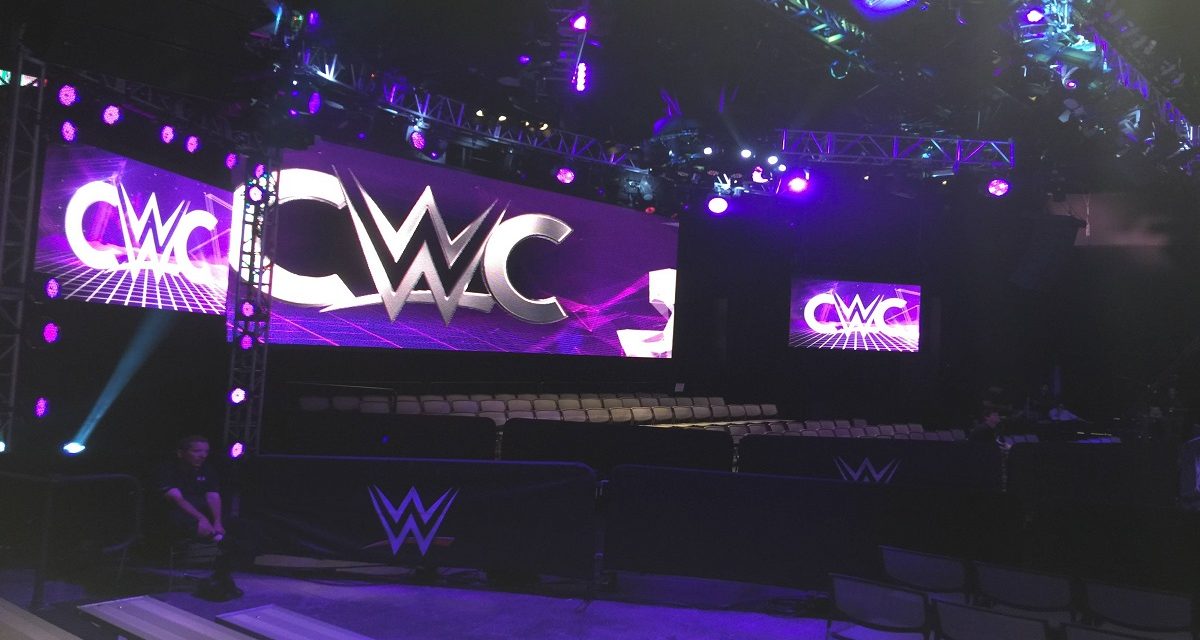 Bravado. That’s what it takes to label the inaugural version of anything “Classic”, and it’s also a quality required of each competitor that has made it to the remaining four featured in tonight’s live finale. We will soon learn who has enough remaining will, endurance, and bravado to get to the ending, then go one more step to capture the tournament victory … and even more. After all, what’s a champion without a belt?

Showing immediate determination to finish business early, Metalik leaps to the air and connects with a dropkick, scoring a two-count ahead of the first minute. Looking stunned, but re-grouping quickly, Sabre applies a series of submission holds, zeroing in on Metalik’s neck. Every time Metalik gets a bit of space he takes advantage with superkicks and a standing shooting star press. Not having the luxury of seeing Metalik’s face, of course, his body language along with Sabre still shows that each is taking a lot out of one another. 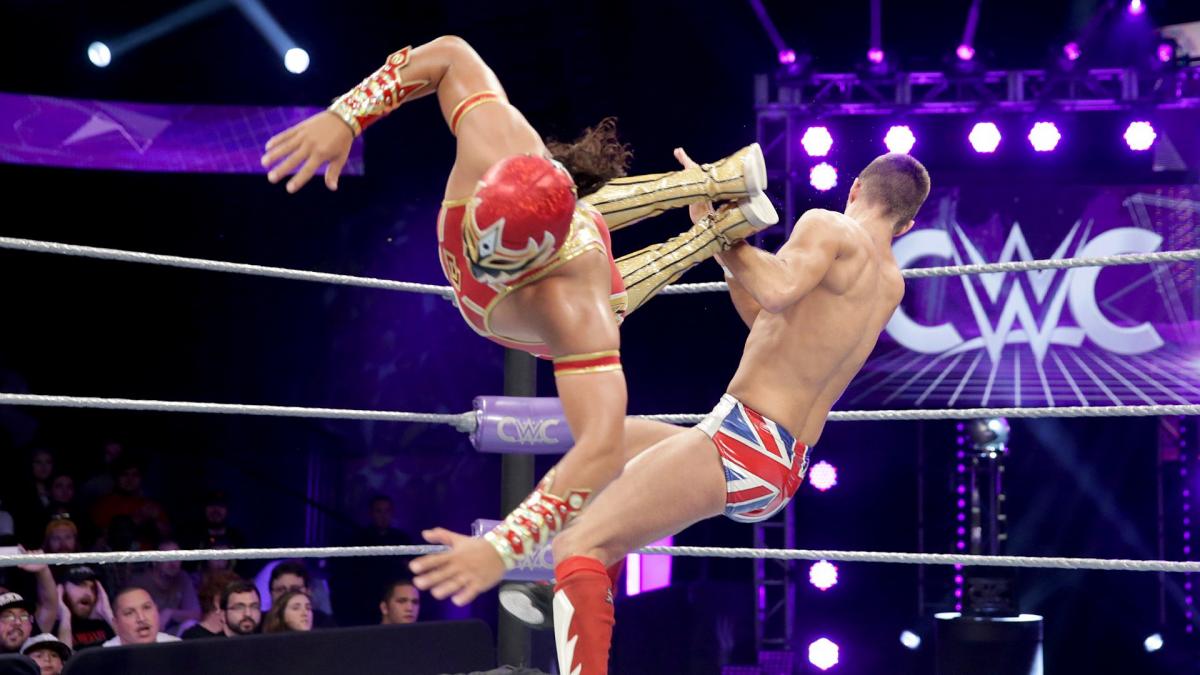 Metalik and Sabre, Jr. in action

Sabre starts taking advantage of distance, hitting an uppercut as Metalik leaps off the second rope, and following with a serious Penalty Kick. Unable to put Metalik away, Sabre starts thinking higher risk and joins Metalik on the top tunbuckle, but a hurricanrana brings the Brit down. Moments later, the seemingly predestined run of Sabre comes to a crashing halt under the Metalik Driver, and Gran Metalik books his pass.

A vision of elation, Metalik receives a medallion from William Regal before expressing his thankfulness through broken English (there was a translator in the ring with him, but she wasn’t given the opportunity to relay his exact thoughts).

A slower start to this semi-final, with tentative tests of grappling strength put forth by both; the crowd, though, is more alive and evenly split in their support. Perkins makes headway with a lot of well-countered defensive throws, but all Ibushi has to do is land a heavy kick to the chest to slow things down. After one such kick, he sends Perkins to the floor and follows with his Golden Triangle Moonsault and a forceful missile dropkick, gaining a two-count but also the momentum.

It was fleeting, though, as he attempted a moonsault off the top rope and landed in a leg-lock submission hold, needing the ropes to escape. Not long after, Perkins finds himself tangled up in the ropes and suffering kick after kick. A powerbomb follow-up by Ibushi, though, is countered into a DDT, and Ibushi’s moonsault kick is countered into a knee-bar that Ibushi powers out of. He hits his Golden Star Powerbomb but gets only a two-count to most everyone’s shock.

A straight kick to Perkins’ head leads to a second attempt at the Golden Star Powerbomb, but Perkins slips away and cinches in the knee-bar in the middle of the ring, with Ibushi holding on as long as he can before needing to submit.

As Perkins celebrates, receiving his medallion from Regal, Ibushi breaks down and leaves to a “Thank You Kota” chant.

And now, while Perkins and Metalik rest up a little bit to put on their best show possible, here’s a sort of CWC vs NXT match-up.

Moments in, Dar finds himself under a double-team assault, but as he stumbles back to his own corner to bring in his partner, Alexander takes over with an aerial assault that seems to scare DIY enough that they resort to further two-on-one tactics. Gar, back in good spirits, takes on Ciampa with high and low kicks, bringing Alexander back in with a blind tag. With all four in the ring, everybody takes some damage and is splayed out in the ring for several moments.

When everything settles down, Ciampa gets stuck in a most ridiculous position, on the second rope with his head tucked under the turnbuckle, waving his arms around in frustration. Alexander helps him out with a running boot, gaining only a two-count. As Alexander questions the count, Dar comes in to try and seal the deal but suffers a double-superkick by Gargano and Ciampa and takes the loss.

The combatants enter, shake hands, and await the bell … but first, Triple H arrives to congratulate the two finalists on making it this far, but reminding everyone there must be only one in the end, and that the one will go to next Monday night’s Raw as the WWE Cruiserweight Champion, holding aloft the belt for both wrestlers to intently focus on. That has fired up the crowd even more. 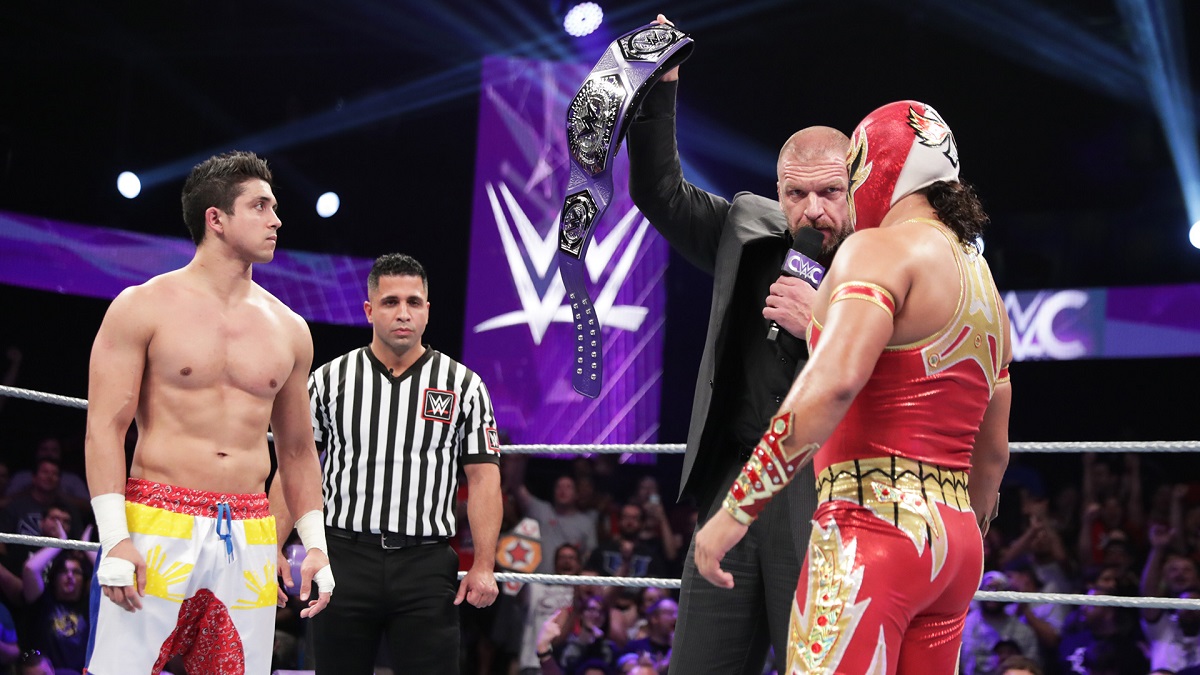 Triple H shows off the new belt that awaits the winner

The opening moments, though, show as much defensive awareness as anything, perhaps influenced by the added element of a championship. Still, both wrestlers soon go to their strengths, with Metalik diving through the ropes to headbutt Perkins out on the floor, and Perkins using a hurricanrana to roll himself and Metalik over the ropes to the outside. Soon after, Perkins stands on the apron and hits a chop on Metalik, then for some reason takes his eyes off his opponent and Metalik responds with a leap over the top rope into a Frankensteiner to the floor, taking both men down and out.

Slowly back into the ring, Metalik tries to re-capture the advantage with a running shooting star press, but Perkins dodges and locks in the knee-bar. Metalik reaches the ropes, then tries for his Metalik Driver but is foiled so settles for a DDT. A moonsault off the top turnbuckle by Metalik crashes into Perkins’ foot, and a second knee-bar follows. Metalik very nearly reaches the ropes but Perkins yanks him back for a third go. This repeats itself once more, but as Perkins tries to re-apply the submission hold Metalik escapes, pops up and slams Perkins down with his Driver, but cannot follow up quickly enough for the three, grabbing at his knee as Perkins kicks out.

With one last gasp, Metalik sets Perkins up for a Driver off the top rope, but Perkins wiggles out and applies his knee-bar yet again. Metalik is unable to withstand this one for long, and TJ Perkins finds himself vaulted into history with a victory. 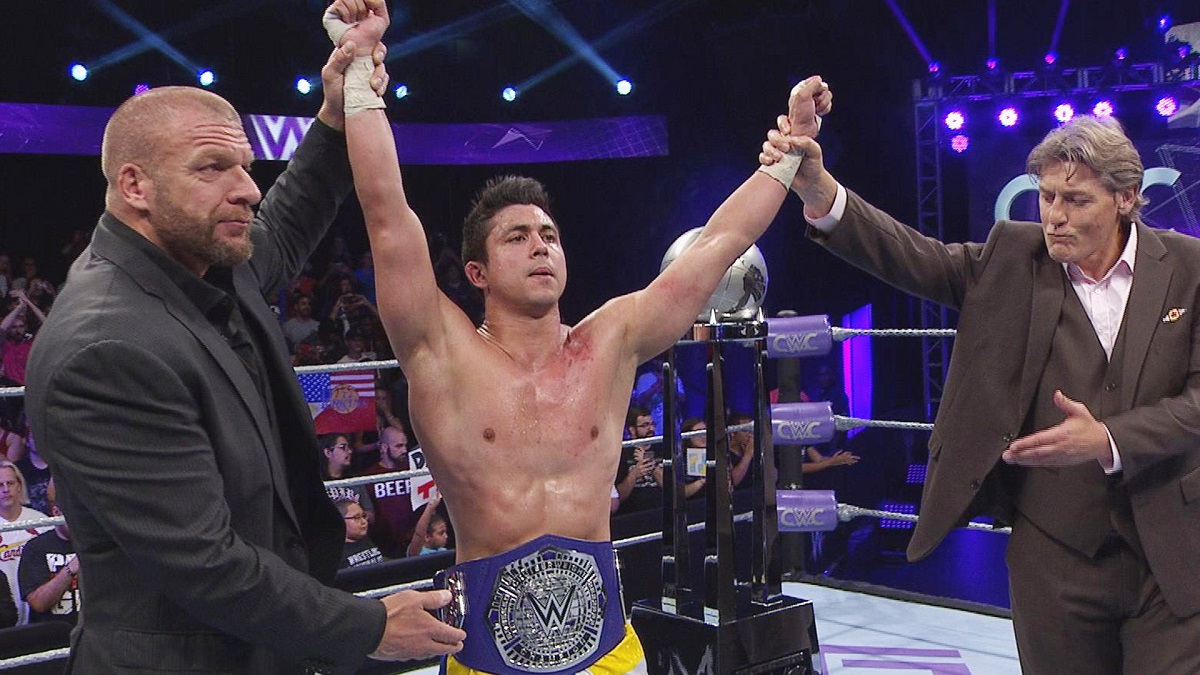 Setting an image that we will see often in the near future, and maybe one that will last a long time, Perkins lets the tears flow as welts erupts through the skin of his chest, hands raised by Triple H and William Regal with the new championship belt around his waist.