Daniels: How being a Kangaroo led to an Addiction

There was a brief portion of Christopher Daniels’ storied career that has been forgotten by many. The recent passing of Denny Kass, though, has brought up memories of Daniels’ time as a New Fabulous Kangaroo, and the tag team lessons he learned.

Even Daniels has trouble remembering all those details. 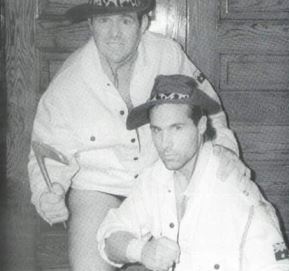 Denny Kass and Christopher Daniels as the New Fabulous Kangaroos.

“If I recall right, [Denny] had come in to do Windy City TV with Al Snow, because they were both the Kangaroos at the time. I met him then. It wasn’t too long after that, that he asked me to take Al’s spot,” said Daniels. “I guess him and Al were splitting, and he asked me if I wanted to do the Kangaroos with him. Literally for like two shows I was a Fabulous Kangaroo with Denny.”

Daniels hadn’t been in the wrestling business very long at all, a year or so. He was green and welcomed the opportunity.

Kass, who was based in Detroit, saw something in Daniels and went to give him more details in person.

“He actually came down and had dinner with me, near where I lived — this is in Indiana at the time. Then we talked a little bit,” said Daniels.

Since Kass, who died August 22, had learned from Al Costello, one of the original Fabulous Kangaroos — the number one tag team of all time according to The Pro Wrestling Hall of Fame: The Tag Teams — there was lots of knowledge to be passed down in a short amount of time.

They only appeared together a few times, but did get a publicity shot done. “I know that we did one thing in Ohio, I want to say at Al’s school, and then I think we did a show for Machine Gun Kelly in Detroit. That was the extent of it, man. … I think I did a singles match where he seconded me and then we did a tag match.”

Looking back, Daniels recognizes there were a number of issues that prevented them from ever really progressing as a team.

“I think the plan was to do more than we did. I don’t really even remember why — I think it just might have been a scheduling thing,” Daniels said. “It was never really a time where he and I were booked in the same spot. I was so far away from him, getting us both together on the same shows probably was logistically difficult. You know what? I was nobody at that point, so the idea of bringing Christopher Daniels across state lines probably wasn’t worth a nickel to any promoter in the world at that point. That’s my take. It’s been, shoot, 22 years.” (Plus, Kass had a full-time job at Ford.)

It is a neat footnote to the history of “The Fallen Angel,” who has been a star for decades now after breaking in with Windy City Wrestling in Chicago in 1993. “I don’t think that it’s something that everybody knows about me, honestly, because it was so quick and so sort of under the radar.”

As half of the Ring of Honor tag team champions with Frankie Kazarian, known as The Addiction, Daniels is most definitely on the map these days. He’s exclusive to ROH as well, since signing a new contract in January 2016.

There have been plenty of championships for Daniels through the years. Singles titles have been frequent, but tag team titles with so many different partners is a sign of a different kind of skillset. In ROH, he’s been a tag champ with Donovan Morgan, with Matt Sydal, and, of course, Kazarian. In TNA, his stellar Triple X tag team with Low-Ki and Elix Skipper won the NWA tag belts three times, plus he was a two-time champ with A.J. Styles (Pro Wrestling Illustrated Tag Team of the Year in 2006) and once with James Storm; plus he was a two-time TNA tag champ with Kazarian when they were known as Bad Influence. 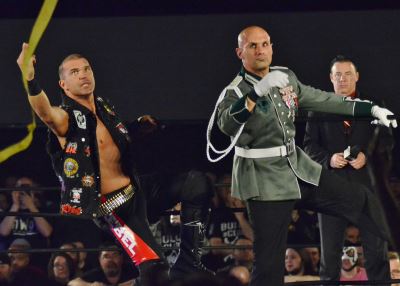 The Addiction, Frankie Kazarian and Christopher Daniels, make their entrance at Ring of Honor’s Death Before Dishonor XIV in Las Vegas in August 2016. Photo by Brad McFarlin

“If you sort of take all my career and look at it, it’s hard to say which one I did better at,” mulled Daniels. “I feel like I’ve been more successful, at least in terms of championships, I feel like I’ve been more successful in a tag team situation — especially in the last couple of years with Frankie as my partner. Four world tag team titles, there are only two teams that have ever held both TNA and ROH. Yeah, I guess that you could arguably say that my career has been better as a tag team than not. It’s definitely something that I was very lucky to have guys him, like Denny, like Mike Moran, who was one of the Texas Hangmen. Those guys really gave me a good mentality about tag team wrestling early on.”

Like Kass was with him, Daniels finds himself in a mentoring role in ROH.

“I think that’s one of the reasons why I’m there is sort of to, not just be a performer, but to help the younger guys out and be the voice of experience to guide guys along,” he said. “I feel like that’s definitely something that I’m getting the opportunity to do now, to give back to the younger generation in the same way that Denny and Mike did with me when I was a year or two years in.”

Guest column: Funeral for Dennis Kass a chance to say thanks