BROOKLYN, NY – The EVOLVE 67 show Saturday afternoon in Brooklyn, as a part of the bigger WWE SummerSlam experience in town, saw the appearance of two just-released WWE employees.

While WWE superstar Cody Rhodes was announced a while ago, EVOLVE promoters Gabe Sapolsky and Sal Hamaoui had a surprise for the sold-out crowd — Joey Styles! 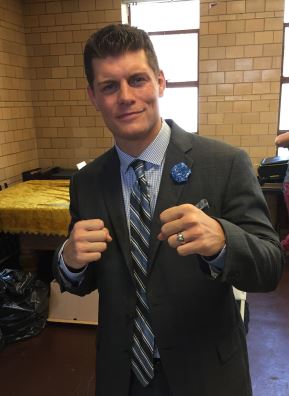 Cody Rhodes poses in Brooklyn on Saturday afternoon at the EVOLVE show. Photos by Patric Laprade

EVOLVE’s lead announcer Lenny Leonard opened up the show by bringing to the ring the man known for years as “The Voice of Extreme Championship Wrestling.” A vice-president with WWE, Styles was terminated on August 8th by WWE, without any public explanation. Both Styles and Sapolsky were at part of Paul Heyman’s ECW.

The fans in attendance at the Saint Finbar Catholic Church Gymnasium gave a spontaneous standing ovation to Styles, as well as many chants such as “Oh My God!” “You still got it” and of course, “E-C-W.”

Styles said that he would be announcing the EVOLVE championship match between Timothy Thatcher and Drew Gulak with Leonard. But he showed that he hadn’t missed a beat, pleasing the crowd while knocking his former employer just a little when he said: “It’s been eight years since I’ve called a match, but Lenny and I might be the best announcing team you’ll hear all weekend!”

As far as the other ex-WWE employee, Cody received what was probably the biggest pop of the night among wrestlers. He was pitted against Chris Hero, himself a former NXT wrestler under the name of Kassius Ohno. After choosing to leave WWE on his own terms, Rhodes posted a list of desired opponents on his Twitter feed, and that included Hero.

The match between Hero and Rhodes was one of the best of the afternoon. They worked on the outside for the first minutes of the match, before settling it in the squared circle. At one point, Hero took a cardboard face of Dusty Rhodes, Cody’s father, that a fan had brought to the show, and started to hit Cody with it. It was a great heel spot to which the fans reacted accordingly. Rhodes eventually reversed it, kissed the sign, and gave it back to the fan.

Hero eventually won the match with his KO elbow blow, but the crowd got their moneys worth in this one.

It was only Rhodes’ second match on the indies, and since he fast-tracked to WWE, through the then-WWE affiliated Ohio Valley Wrestling a decade ago. On Friday night in Joppa, Maryland, he defeated Zack Sabre Jr. on another EVOLVE show in his first match since leaving WWE.

After the match, Hero made sure to remind Rhodes that he should be careful of what he wishes for.

“I hope you have learned your lesson. Don’t put my name on your silly list,” Hero said, referring to Rhodes’ Tweet about who he’d like to wrestle and which promotions he’d like to work for. 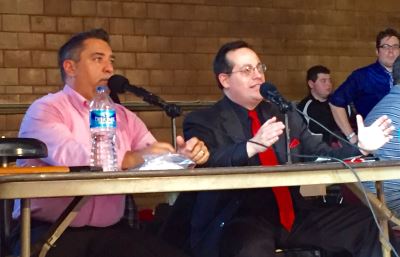 At the very end of the show, after a six-man tag, both Rhodes and Styles came back to the ring to interact with the heel group of Drew Galloway, Ethan Carter III and Dustin.

“How is it to wrestle in front of fans who actually PAID for their tickets to see you wrestle?” he asked Galloway, referring to TNA’s television tapings being held in Orlando at no charge. The crowd ate it up.

He said that Dixie Carter must’ve been a genius to get Billy Corgan from the Smashing Pumpkins to invest in TNA.

“Corgan would’ve been better off investing in an actual smashed pumpkin,” he cracked bringing back memories of ECW shoot promos.

While Rhodes and Styles were the focal point of the show, the rest of the card was very good. Former UFC competitor Matt Riddle against Tommy End, and Cedric Alexander versus Zack Sabre Jr. in a WWE Cruiserweight Classic Spotlight match were the best two matches on the card.

Styles also announced at the very end that on September 10th, in Queens, NY, Rhodes would team up with Johnny Gargano to face the team of Drew Galloway and Chris Hero.

Here are the quick results from EVOLVE 67: