Major Duke George, who died on July 6, 2016, at age 69 in Las Vegas, was manager to the Valiant Brothers in the WWA territory, based out of Indianapolis, but was not well known in too many other places.

That was by choice.

“I had no desire to travel too much away from the family situation,” George said in 2011. “Plus I was doing the best I’d ever done with Jimmy right there in the Midwest so there was no reason to go anywhere. … I was a homesteader.” 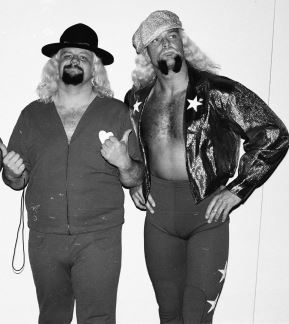 Jimmy Valiant, who was managed by George long before he was ever the Boogie Woogie Man, compared George’s ability on the microphone to Bobby “The Brain” Heenan.

“Just so fast, so witty, just on the drop of a dime, he can get that interview over, just like Bruiser could or Crusher could. That’s how we drew money, man,” said Valiant. “Can you imagine sitting at home, comfortable in your chairs, and Duke comes along with the Valiant brothers, and his job is to talk these people out of their comfortable chairs in their home, and come up out of their home, brother, and go to the Amphitheater or the Hammond Civic Center, or the Indianapolis Expo, and pay their hard-earned money to see us perform? That was his job and he did that well.”

Born July 29, 1946, George grew up in the western suburbs of Chicago. He was a wrestling fan growing up, but drifted away from the sport during high school. But he liked to work out and stay in shape and caught the eye of wrestlers Paul Christy and Wilbur Snyder.

“I just happened to meet them by accident; we were all in the same gym. We became friends,” George recalled. “Then I met other guys. ‘Hey, I want to do that. I can do that.’ And I just started doing it.”

His actual training in professional wrestling came under Tom DeMarco — “He was very knowledgeable, he knew it all” — and Bob Sabre. One of his early wrestling names was Gorgeous George Jr., and he wasn’t the only one to lay claim to the famous moniker. He worked many undercards around the midwest.

But it was with the Valiants, especially with a single “Handsome” Jimmy Valiant, that he had his biggest run, and the Major Duke George named was assigned by Dick the Bruiser (perhaps after a wrestler from the 1930s named Duke George).

“In 1973, this kid, I call him a kid, I call everybody a kid, but this brilliant manager, I’m telling you, in WWA, Indianapolis, this was Dick the Bruiser and Wilbur Snyder’s territory, it was the best year their office has ever had,” recalled Valiant. “For one thing, we worked five, six days a week; for years, all they wanted to work was Thursday, Friday and Saturday, and we’d to TV on Tuesday, interviews … Here we’re working six days a week, they brought in some great talent, along with the Major, we had Ernie ‘The Cat’ Ladd, Pepper Gomez … Bruno came in, Denucci came in, Ivan Koloff The Russian Bear, and of course the regulars, Moose Cholak, Paul Christy, the local boys. We had the greatest territory and we were on fire. And Duke was right there. He managed me, and we brought Johnny in late ’73, and we were WWA World tag team champions with Duke as our manager.”

“Duke” concurred. “We had some of the best years ever working for that territory. When something like that gets started, you can’t stop it if you want to — it just goes.” 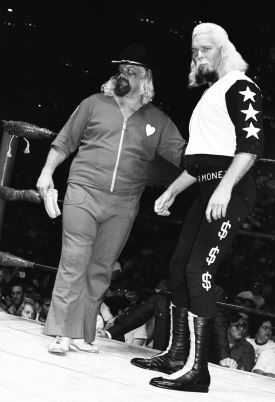 Wrestler Mike DuPree (Chris Parsons) posted his memories of Duke George, who would dress as a military major and blast his whistle to get attention, back in 2007. “When Joe Cagle and I were teenagers, we would travel much of the time with the ring truck to various venues on the trot, so we would see all of the boys a lot. We used to talk to Duke all of the time, great fellow. Now a lost art in pro wrestling is walking and talking/stalling to get the crowd riled. Not only could Duke talk on the stick, but he was great at walking and talking. He could get more heat just taking his robe off than a lot of guys doing a hard 15.”

The WWA territory was run by Dick the Bruiser and Wilbur Snyder, and the biggest town was Chicago, which was handled by Bob Luce. In a 2007 online forum, George talked about his appreciation for Luce. “Bob Luce was a good guy and great for wrestling. If he was awake he was promoting wrestling not just his shows but wrestling in general,” he wrote. “We loved Bob Luce.”

Bruiser was a different story. “Like any other boss, up and down days. He was the boss, though. It was just that simple. He was the boss, we worked for him, and did what he said. He was kind of a wacky person, I’d say. No crazier than most in the same position,” George said with a laugh in 2011. “He was sure over, there’s no doubt about that.”

In the fall of 1979, George called it quits. As the story goes, hot dogs were at the centre of the issue. The wrestlers got theirs for free, but Dick the Bruiser insisted Duke George pay for his. He wouldn’t reveal whether he was fired or quit in the 2011 interview, insisting that it would be in his autobiography one day.

Away from the ring, George had a family, including two daughters, Katie and Dawn, and never did go in for the regular 9-to-5 life. He never really had a “day job”; for a while, he repossessed cars — “stuff you could do without regular hours.” 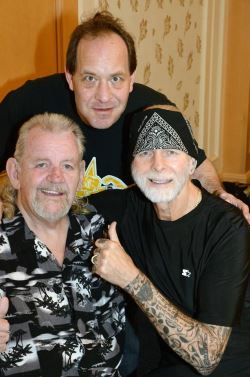 He also made very decent money as a poker player, and turned pro in 2001. Not long after he moved to Las Vegas, where he also had family. “I can still read people,” he bragged, a skill he picked up from wrestling.

Thanks to the Internet and the Cauliflower Alley Club reunions in Las Vegas, George reacquainted himself with old colleagues. “I followed in The Major’s footsteps as a manager-wrestler a few years after The Major left Bruiser’s territory. What a funny and creative individual he was,” wrote Scott Romer on Facebook. “He was living in Vegas and made is living as a professional poker player. I am glad to of reconnected with him at the Cauliflower Alley Club Reunion back in 2011. We would communicate back and forth through Facebook as recently as last month.”

He died in Las Vegas a few weeks short of his 70th birthday. Funeral arrangements are not known at this time.