There is little more subjective in professional wrestling fandom than picking a favourite match. Most of us have seen thousands of matches, each a moment in time that resonate differently than your neighbour.

So the challenge for WWE, with its latest book, WWE Greatest 100 Matches is coming to terms with the fact that it’ll never, ever please everyone.

There’s plenty to like about this book, but if it doesn’t make you want to seek out these matches on DVD or on the WWE Network, then its job isn’t done.

That means that maybe I wasn’t the right guy to review this book. I’ll watch matches on pay-per-view and move on. I don’t obsess, or fret, or watch again and again to seek out the flaws and the masterful moments. 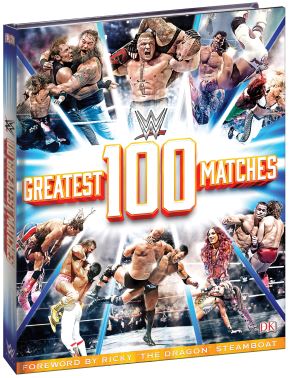 Here’s what you get: A beautiful, hardcover book, chock full of great photos; you get details on the match itself (date, PPV or TV, location), a lead-up to the bout, a description of the match itself and a quick rundown of the aftermath, as in where the match lead to in future storylines; there is no countdown, just 100 matches.

It’s a nice acknowledgement that a match, meaningful or not, is just a moment in time, where one incident leads to another and to another, through 53 years of WWWF/ WWF/ WWE history.

What is not acknowledged, other than in the foreword by Ricky “The Dragon” Steamboat, is that these works of art in the ring are meticulously planned and thought out, with performers, agents, management, referees, announcers, and more, all contributing to making it a classic. Or that there are unexpected moments, happy accidents even, that contribute to the experience.

This is my biggest complaint about the book (besides the all-too-familiar dismissing of the author, Dean Miller, who is only on the copyright page). With all the access available to these competitors, we hear from none of them. What was it like bodyslamming Andre the Giant, Mr. Hogan? Brock, you broke The Undertaker’s WrestleMania streak; how did that make you feel? Scott, Shawn, you set the bar for ladder matches at WrestleMania X, and now they are everywhere — did you expect to change pro wrestling?It’s not like this is breaking ground, as WWE does it already on its DVDs or on its network. People who love wrestling crave behind the scenes info. Right from the start, WWWF was created in controversy — how damaged was Buddy Rogers’ heart that he only went 47 seconds, losing to Bruno Sammartino? What’s more interesting, the lie that is told here that Rogers won a tournament for the WWWF title, or the fact that Vincent McMahon Sr. asked Rogers to us the U.S. title that he already owned as the first WWWF title?

Jumping ahead 20 years, Hulk Hogan jumping from the AWA to the WWF changed the world perhaps more than his title win over The Iron Sheik. What would have happened if Sheik, a legit wrestler, had accepted AWA honcho Verne Gagne’s bounty and hurt Hogan instead? Again, the back story is far more interesting than what happened in the ring, at least to me.

There was plenty of “Oh, I remember that one” or “I was at that show” for me as I went through, so the nostalgia factor worked.All the expected “greatest” matches from WWE history are here, as far as I’m concerned, or as far as I’m willing to invest thought into it. HBK vs Flair, Taker vs Foley, Steamboat vs Savage, Hart vs Austin, Hogan vs Rock. I was surprised that a few supposedly blackballed names got mentioned for their matches, like Chris Benoit (against Chris Jericho), or CM Punk. Shelton Benjamin is in there, not that he left on bad terms, but he has been seemingly forgotten.

There’s plenty puzzling. Why a British Bulldogs bout against Iron Sheik and Nikolai Volkoff when they had so many better bouts against more capable opponents? How can Big Show make a “greatest” of anything, let alone in a tag team bout with Jericho against D-Generation X?

As for women, well, there’s the usual suspects, Trish Stratus, Lita, Mickie James. The couple of NXT bouts are women’s matches, and seemed like a throw-in, and quite honestly, disrespectful to the women who paved the way. Fabulous Moolah was not a great highspot wrestler, but her proteges, like Leilani Kai, Velvet McIntyre, and more delivered great bouts … and apparently the Jumping Bomb Angels never invaded WWF and turned it on its ear (or at least it did for this teenager, who’d never seen women fly like that before).Going through it, besides finding a lot of Triple H bouts (hello, boss), I became curious how it skewed. There is one bout from 1963, two from the 1970s (what about Pedro Morales?), 10 from the 1980s, 23 from the 1990s, 40 from the 2000s, and 24 from 2010 on. From those raw numbers you can see how it skews to more recent bouts, which, no doubt, are available on the WWE Network. Funny that.