The relationship between New Japan Pro Wrestling and Ring of Honor has delivered many great matches and has helped stars get further work on both sides of the equation.

Would Shinsuke Nakamura make it to WWE’s NXT without his North American exposure? Would Michael Elgin have gotten a two-year deal in NJPW? How about Doc Gallows and Karl Anderson leaving New Japan’s Bullet Club for WWE? 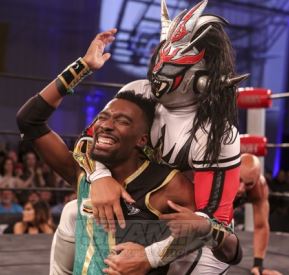 The New Japan Pro Wrestling and Ring of Honor relationship has delivered a unique tag team of Cheeseburger and Jushin Liger. Photo by Ricky Havlik, RickyHavlik.com

A number of different talents, on both side of the ROH-NJPW equation have given some thought to what the deal has meant over the last three years.

“It’s not only changed things for Ring of Honor, this working relationship with New Japan has changed things for the wrestling business in general,” said ROH World champion Jay Lethal. “This is a win-win situation for the fans, and I’ve made this analogy before, I said, ‘In order to be a top wrestling promotion, you kind of have to be selfish, you kind of have to only want your talent to be seen, only your merch to be sold, only your product to be out there to the masses.’ When you can put that aside, when the number two and number three wrestling companies in the world can put that aside and join up so that the fans ultimately win, the fans get this cool experience and it makes the wrestling business as a whole much better than it was before the merger.”

Lethal said that he had always been a fan of New Japan, and mentioned being a mark for Shinsuke Nakamura in particular. “When you can say literally, ‘Aw, there’s nobody else like that guy’ then you know that you’re doing something right,” said Lethal. 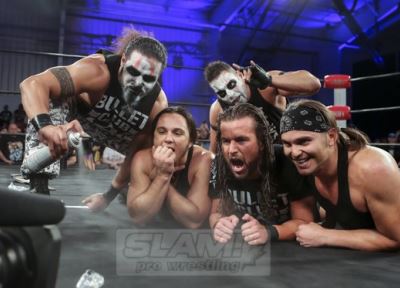 Steve Corino, ROH agent and occasional commentator, sees it as an alternative to what fans are used to in the United States and Canada.

“Where WWE, NXT, TNA or Lucha Underground have their own brand, this partnership with New Japan Pro Wrestling gives a whole different feel to a different side of professional wrestling than regular Ring of Honor does,” said Corino. “It’s cool. It’s two big companies going at it, whether it’s tag team, whether it’s singles against each other. At the end of the day, the big winner are the fans because they get to see something different.”

The wrestlers win too, said Kyle O’Reilly, who has a regular gig in New Japan now as well.

“It’s a great opportunity for the guys to work in front of the New Japan office, get the opportunity to work with New Japan wrestlers,” O’Reilly said. “This whole relationship sparked my opportunity to get into New Japan in the first place as well. I’m grateful for the relationship. I’m glad that it’s strong and hopefully it continues to be so in the future.”

One would think that the language barrier would be a challenge, but O’Reilly said that it wasn’t an issue — they all speak wrestling.

“It’s a real treat to be honest,” said O’Reilly. “They’re very nice and respectful and they’re probably the best wrestlers in the world, so getting the opportunity to share the ring with them just makes me a better performer.” 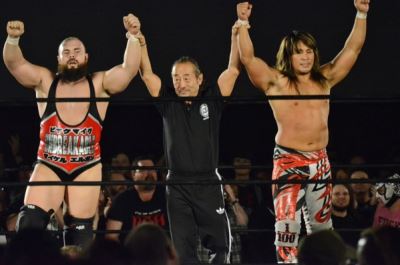 Tiger Hattori, the long time referee and agent for North America, often serves as a bit of a chaperon for the NJPW wrestlers. He was on the recent May trip to Chicago, Detroit, Toronto and New York City with the likes of “Rainmaker” Kazuchika Okada, Tomohiro Ishii, IWGP Heavyweight Champion Tetsuya Naito, Hiroshi Tanahashi, Gedo, Jushin “Thunder” Liger, and Kushida.

“We started very good relation for exchange boys, both offices getting better, Japan and U.S.A,” Hattori said. He mentioned Ishii in particular as someone who had benefited from the added exposure of winning the ROH TV title. “Iishi very hard worker. … I knew him, he was very young, beginning. He’s not a big guy. He learned from Choshu, old-school, very old-school. So now he’s getting over. It takes time.”

A few have experience in North American rings already. Gedo — who is also a matchmaker for New Japan — worked back in the original ECW. Kazuchika Okada was full-time in TNA from 2010-11. Liger has been in and out of WCW, ROH and even NXT over the years. Kushida trained for a while in Windsor, Ontario, with Scott D’Amore and wrestled regularly within a reasonable distance of the city. 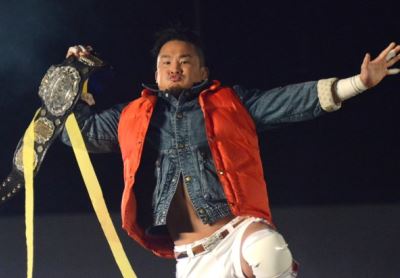 For Kushida, it was a homecoming of sorts, in particular wrestling in the Detroit suburb of Dearborn. He’s come a long way from working early matches in Japan’s Smash promotion.

“Six years ago, I lived in Windsor, Canada. So no contract with New Japan. It’s three years, no money. Hard times. Only training time,” Kushida said. “That time was a difficult time for me in my life. Some time in the future, I hope fighting in ROH, TNA, WWE, New Japan Pro Wrestling, my dream. Now dream come true. Being New Japan contract wrestler, come back to U.S. and Canada, I’m so, so happy. Yes.”

In the shrinking world, it’s about far more than just seeing a wrestler live, of course.

“I used to have to wait weeks for my New Japan and All Japan videos!” laughed Corino. Now, there is a weekly NJPW wrestling show, with English commentary by Jim Ross and Josh Barnett, and a website to watch NJPW action.

“I tell kids this all the time — in 2016, we have, right at the edge of our hands, we have access to all the best wrestling in the entire world,” said Corino. “And people say, ‘Well, I don’t like WWE,’ or ‘I don’t like ROH’ or ‘I don’t like TNA,’ but we have all this information — we can watch YouTube and watch old matches; we can watch the Network and we can watch old matches; we can watch stuff from Mexico or England, the U.S., and Canada; we can see the crappiest of crappy indies or we can see the best of the indies. For me, as a professional wrestling fan for the last 35 years, man, it’s the coolest time to be in professional wrestling and be a wrestling fan. Man, you have so many different options that you can’t go wrong. New Japan has capitalized on that by creating their own streaming network. It just shows that there’s more to the wrestling world than just one company.”

Or, as Hattori said, “world is so small” now.