This Sunday, many wrestling fans in the Greater Toronto Area will make their way to M-I-Double S-I-Double S-A-U-G-A, to see the modern-day legend Jeff Jarrett step in to a Destiny ring for the first time ever. SLAM! Wrestling caught up with Jarrett to discuss that show, and to talk about the future destiny of his own Global Force Wrestling promotion. 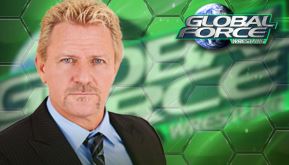 “Over the past two years, or just a little bit longer than that,” he said, “we’ve been going to many independent promotions all over the world and creating relationships. We want to align ourselves with companies like Destiny that run a great promotion.”

At the show, Jarrett is scheduled to team up with Destiny poster boy Randy Reign against the villainous duo of Destiny Champion RJ City and the Godfather of Canadian wrestling, Scott D’Amore. Although Jarrett didn’t divulge any plans for the match, it probably wouldn’t surprise many people should RJ City, the self-professed musical entertainer, find his a cappella voice accompanied this time by Jarrett’s guitar… to the head.

“Regardless of what happens,” Jarrett teased, “I can say that the fans are going to be in for a really special night.”

Sunday’s show will be the capper of a busy weekend for Jarrett, who will be at Global Force shows in Pennsylvania on Friday and Saturday before heading north. But being on the road is familiar territory for Jarrett and GFW, and there are no plans in place to slow down – in fact, it’s quite the contrary.

“Even bigger is that we’re partnering with A. Smith & Company, who produce shows like American Ninja Warriors and Hell’s Kitchen, and we’re working on some pretty cool, innovative things. That partnership has been a game-changer for us, but the details of that relationship will be coming out within the next three to four months.”

That’s also about the time that Global Force will be bringing a show up to Ontario. The company recently announced that they will be coming to Timmins, Ontario, on October 1 for a co-branded show with the MaxPro Wrestling promotion.

“We’re really excited to be partnering with them,” Jarrett said about MaxPro, “and to kick off our relationship with them in October. That area of Ontario, they don’t always get a lot of wrestling, so the fans are always excited when it does come around.”

Of course, Jarrett will be using both of the Canadian dates as opportunities to scout out talent to add to the GFW roster, wrestlers that really connect with the Destiny and MaxPro fans. There are a few Canadians in GFW — Cody Deaner, for example — and in keeping with the Global Force name, Jarrett is always looking to add others if the fit is right.

“It’s no secret that Canada has produced some of the best wrestlers in the world, for decades and decades,” Jarrett agreed. “And that can be said about the Canadian fans as well. I’m very glad to be coming back to the Toronto area this weekend.”

Destiny World Wrestling runs this Sunday at 7pm at the Don Kolov Arena in the Battle Arts Academy (4880 Tomken Road) in Mississauga, Ontario.

Bob Kapur once fell in love with a girl named Destiny. But when he ran out of twenties, she wanted nothing else to do with him. E-mail him your tales of heartbreak at [email protected].