Former WWF Women’s Champion Leilani Kai was involved in the first WrestleMania and held the WWF Women’s Tag Team Championship twice as part of the Glamour Girls duo with Judy Martin. For these accomplishments, and her four-decade long career, Kai was honored on the weekend by the Professional Wrestling Hall of Fame & Museum, which recently moved from New York state to Wichita Falls, Texas. 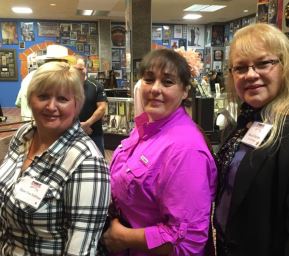 “I’m just ecstatic about being here,” Kai said during her acceptance speech. “I could pinch myself. I can’t believe it. This is the real hall of fame and I’m so honored to be here.”

Kai was inducted by her WrestleMania I nemesis Wendi Richter, who said the former Glamour Girl “probably helped more women wrestlers break into the business than any other woman and not be compensated for it.”

For the past two years, Kai has spread her knowledge of the wrestling business through SHINE Wrestling and partnered with Steve Stasiak of Book Pro Wrestlers. Kai’s partnership with SHINE Wrestling emerged due to Lexie Fyfe, of SHINE, asking her to become part of the company.

“We go back a long way, and we trained together worked together on the road,” Kai said, “and she just thought I would add some spark to it, to come back and work as a manager with the Legendary of Malia Hosaka and Brandi Wine.”

Fyfe, who has known Kai since 1996, wrestled the former Glamour Girl six months into her own career and said she does not thing she “would have gotten as far as (she has) without all those early matches” with Kai. As far as SHINE is concerned, Fyfe said the majority of the roster, though “great wrestlers,” are “younger and newer to the business.”

“When I say newer I’m saying it from my point of view, someone who has been in the business for 20 plus years and in Leilani’s case of course more than that,” Fyfe said. “We thought that asking Leilani to come in as the cunning veteran would be a good balance to what we already had.”

Hosaka said Kai, who has worked with the Legendary for nearly three years, “brings so much to the table.”

“Her knowledge and experience alone are amazing, but she is entertaining,” Hosaka said. ” She knows how to involve the ref, fans and bring the match together as a tag team.”

Kai said the opportunity gave her a chance to be back around the business and use “my head and my mouth instead.” Having done some valet work in the past, Kai said it was a “pretty easy transition” to the managerial role. 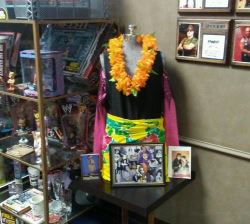 “It is because of her I am able to walk and talk in a ring,” Hosaka said. “During the early years of my career, she was instrumental in showing me the ropes and teaching me the beginnings of psychology and comebacks. I cannot ever express enough how much I love and admire her for paving the way and passing on her knowledge to me.”

Kai also offers advice when approached and at SHINE events.

“I watch a lot of YouTube matches of girls that ask me to give them my opinion, I do that,” Kai said. “There’s just so many of them in the business now… I love to, and with SHINE, I try to give my opinion on things and the matches.”

Fyfe said the wrestlers on the SHINE roster “look up to Leilani as a pioneer in women’s wrestling.”

“They all want to work with her and ask advice. I know a lot of them have watched her matches over the years and emulate some of her moves. I think she adds an element that we didn’t have before using her — that mean heel that will do anything to help her team win. Wrestling doesn’t have many of those anymore. It’s all very gray area, tweeners as they are called. Leilani doesn’t want or need to be a tweener. She does her job so well, and I couldn’t love her more for it.” 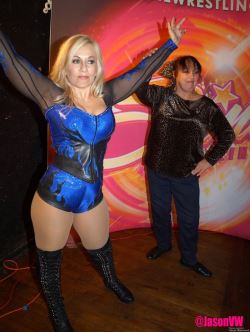 Brandi Wine and her manager Leilani Kai in SHINE. Photo by Jason Wilt

Before reaching the point where women seek her out advice, she was trained by The Fabulous Moolah and made her way to the inaugural WrestleMania and inaugural Survivor Series. But it was teaming with Martin to form the Glamour Girls that Kai remembers as “the best time” in her career.

“That was my favorite thing in the whole world,” Kai said. “It was a whole big change for us, and I didn’t know if i could pull it off, you know, pulling off that character.”

Kai said she is staying involved with the women as much as possible and also is working on teaching seminars. However, the bulk of her work outside of SHINE is with Stasiak and Book Pro Wrestlers.