Lio Rush out to make a name for himself 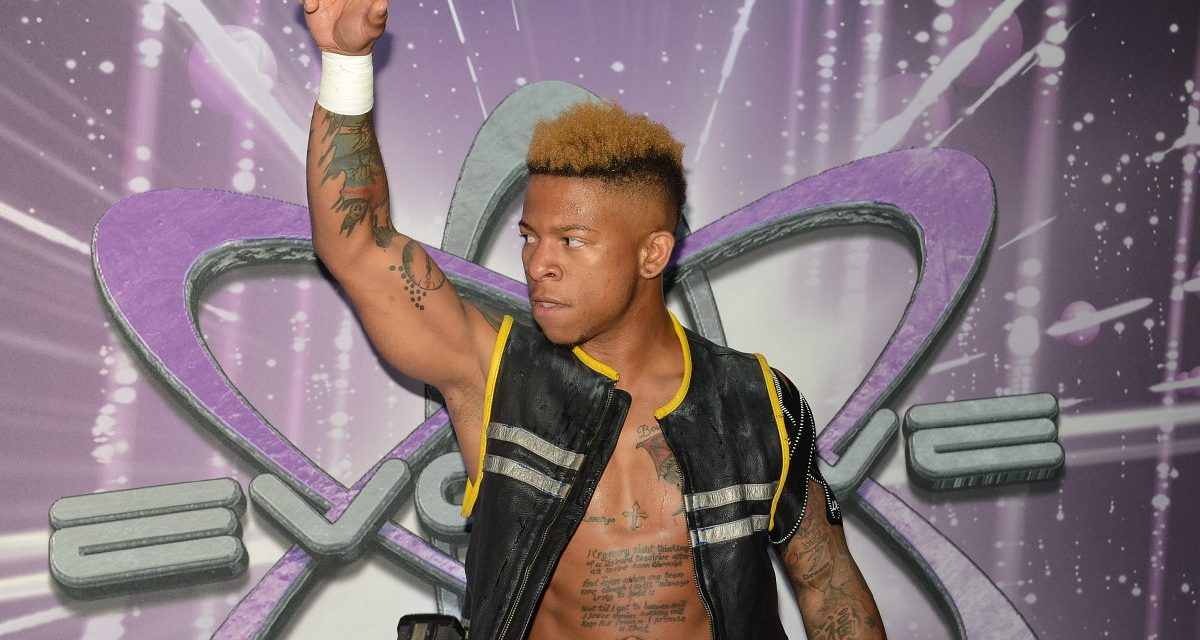 Lio Rush is barely old enough to drink, vote or gamble. But there is no age limit in the world that would have prevented him from being a professional wrestler. Even if that opportunity didn’t come knocking, he would have built a door.

The 21-year-old native of Lanham, Maryland, fell in love with wrestling by the age of five, and he hasn’t looked back since.

“As a kid, I played baseball, football and basketball,” Rush said. “But when it came to wrestling, I liked how there was so much attention focused on one person rather than a team, so I always it in my mind that I wanted to do that.” 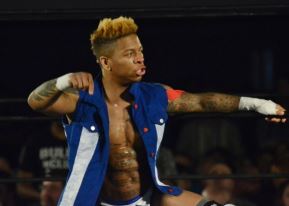 When he started going to live shows, Rush’s interest in wrestling started to increase, and he soon realized that he was getting closer and closer to fulfilling his dream.

“I thought it was interesting to see so many people come to a show to just watch one person, and I wanted to be that person one day,” Rush said. “I grew up watching the Ruthless Aggression era, and seeing guys like Kurt Angle, Eddie Guerrero and Jeff Hardy. I actually wanted to be a professional wrestler after seeing Kurt Angle win the championship.”

Seeing his hero, Kurt Angle, succeed as a professional wrestler also inspired Rush to take up amateur wrestling. And Rush was fortunate enough that his high school actually had a wrestling team.

“I was an amateur wrestler for five years as an All American. I attended Bishop McNamara my freshman year, and then I ended up transferring to DuVal High School,” Rush said. “I got offers to places, but I didn’t want to wrestle in college, just because I knew that the reason I tried out for amateur wrestling was because I wanted to become a professional wrestler. A lot of people had ideas for me, but I wasn’t really interested.”

After finishing high school, Rush didn’t waste any time looking for schools in his area, as he really had no other interests aside from being a professional wrestler; he focused all of his attention on it. Even to this day, Rush will admit that wrestling is all he ever thinks about.

“The first guy that I ever asked advice from, even before I started wrestling, was Matt Hardy. I asked him what it takes to succeed in professional wrestling. He told me that I needed to eat, breathe and sleep professional wrestling. And if I didn’t do that, then I wouldn’t be at the level that I’m at now,” Rush said. “Wrestling is all I’ve ever wanted to do since I was a little kid, and right now, it should be the only interest that I have. I got started about a year or a year and a half after I graduated (high school). I was looking at a couple of different places, and MCW Bone Breakers, which is now MCW Training Centre, announced that they were opening a school that year. I had a friend named Patrick Clark who actually told me about it, and a few months later, I ended up signing up.”

Rush wanted to make sure that he found a credible school in the area, because he didn’t want to just train anywhere. Because of his amateur background, he already had a significant advantage over some of the other students, but he always remained humble about it.

MCW was unique in the fact that it was run by four trainers, so Rush had an opportunity to learn four different styles. What also may have helped persuade him was the fact that one of the school’s graduates went on to have a very successful wrestling career, and eventually became a WWE Hall of Famer.

“We had a few coaches that really cared about us. We were trained in technical wrestling, high flying, brawling, etc. It was pretty cool to be in a place where so many great professional wrestlers and hall of famers had trained, including Lita,” Rush said. “I wanted to be able to follow in their footsteps, so I wanted to make sure that I chose the right school.”

Rush improved his technique with every passing day, and eventually the promoter had enough confidence in him to let him run with the ball.

“My first time working a show, I actually didn’t know that I would be wrestling. I just happened to have my gear that day, and the owner of MCW asked me if I had my gear and if I was ready, so I told him, ‘Yeah, I’m ready,’ but I actually felt like I was ready months before that. So he ended up putting me in a match on the show,” Rush said. “I felt kind of mad, because I didn’t think that I performed at the level that I could have performed at.”

Rush can be his own worst critic at times, but like most wrestlers, he strives for perfection. 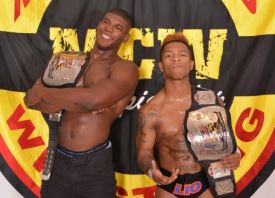 The promoter would occasionally team Rush up with Patrick Clark in tag team matches. Rush and Clark, known as Sudden Impact, were close friends, so neither of them minded, but it was a different dynamic, and it did take some time to get used to.

“The tag team that I was in specifically was a lot more frustrating, because Patrick was a friend of mine before I had even gotten into professional wrestling, and in tag matches, you not only have to look out for yourself, but you also have to look out for someone else,” Rush said. “Singles wrestling is, I don’t want to say less stressful, but it’s just an easier feeling, because all you have to worry about is yourself, and not rely on somebody else for certain things. When you’re on a tag team, people know you, just based on your tag team name.”

Rush has gone through many name changes in his career thus far. His parents named him Lionel Green, but he entered the business as LI Green. The promoters didn’t like that name, and they made Rush change it to Lennon Duffy, a name that Rush didn’t care for. Some might think “It’s just a name,” but Rush knew that it’s a name that’s going to follow you around for the rest of your career. It took a while, but eventually Lio Rush was born.

“When my name was LI Green, people used to pronounce it as ‘Lee,’ so I started to call myself Lio, and then my last name Rush was just because of my style,” Rush said. “I was always so quick, not just in the ring, but outside the ring too.”

His quickness is just one attribute. There is also his agility and his technique among other things that might make Lio Rush a household name one day. That was enough to catch Ring of Honor’s attention.

“I first impressed Ring of Honor when I went to their training camp. I was 20 years old at the time, and at the end of my tryout match, they actually found out how old I was, and I told them that I had only been wrestling for six months, and they were absolutely shocked,” Rush said. “They didn’t want to put me on Ring of Honor television just because of the fact that I was so young, and I needed that exposure and that experience. So I left that first camp and I went to wrestle for Evolve, and then I went to Canada for the first time.”

After getting the exposure that ROH required of him, Rush came back to Ring of Honor in full force for another training camp, only this time he had backers. Rush had the support of many locker room veterans and staff such as Kevin Kelly, Steve Corino, Adam Cole, ROH Champion Jay Lethal and Kyle O’Reilly. 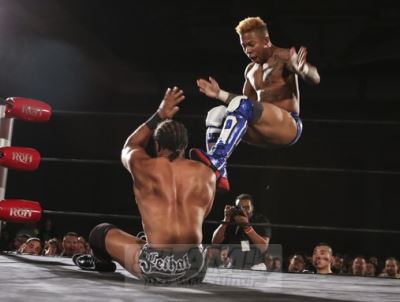 Not only was ROH even more impressed by Rush the second time, but Rush impressed them enough to earn a spot in this year’s top prospect tournament. Rush then went on to win that tournament and challenge ROH World Champion Jay Lethal at the Supercard of Honor show back in April. This was all within a couple of months, and if that match didn’t seem special enough, it also took place over WrestleMania weekend in Dallas, where ‘Mania was being held.

Needless to say, the pressure was on. But Rush made the most of that opportunity, and even though he did not win the ROH Championship that night, he did secure himself a spot in the ROH locker room, which means just as much to him.

“I definitely knew that there were extra eyes watching my match. Nobody thought that I would win the top prospect tournament, and I was the youngest person to win that tournament. I made a lot of history that weekend. When the announcement that I was wrestling Jay Lethal went public, the Internet actually blew up, and I knew that there were going to be people flying from around the world to come and see that match. I had a lot of offers coming to me, but I actually signed with ROH the day before the show. I wasn’t really nervous going into that match, just because of my amateur wrestling background and being an All American, so I was used to wrestling in front of bigger crowds. As soon as I saw Jay Lethal coming down to the ring with the Ring of Honor Championship, I knew that it was going to be something special,” Rush said. “The biggest feedback I received after that match was actually from Jay Lethal, who told me to just keep doing what I’m doing, and that I’m going to be great one day, and that I might even be better than him one day. That was pretty cool for him to say. And he said that if I kept being humble and just make myself approachable, then I would one day be something great.”

Like many others, Rush hopes to one day make it to the WWE. Until then, he just wants to enjoy life and keep growing in the business.

Until May 28, Rush will be competing on nine events across Canada, on his first ever Canadian Wrestling’s Elite tour in Western Canada, which he is very much looking forward to. Rush will be joined on the tour by ROH veterans Silas Young and Frankie Kazarian.

“A lot of Ring of Honor guys have been on the tour in the past, so I’m definitely looking forward to it,” Rush said. “I just want to wrestle everywhere and make a name for myself everywhere.”

CWE ON TOUR
-May 20 in Sherwood Park, AB, Millennium Place
-May 21 in Calgary, AB, Shakers Fun Centre
-May 22 in Medicine Hat, AB, Southside Event Centre
-May 24 in Regina, SK, The Exchange
-May 25 in Souris, MB. Souris & Glenwood Memorial Complex
-May 25 in Brandon, MB, Assiniboine Community College
-May 27 in Winnipeg, MB, Holy Cross Gymnasium Hall
-May 28 in Thunder Bay, ON, West Thunder Community Centre
-May 29 at Fort William First Nation
-May 30, Free show at the 2016 Great Transcona Campout, Tim Hortons, Winnipeg