Joe Pazandak dared somebody to beat him, and few did.

In the early 1950s, Pazandak ruled the “Beat the Champ” segment on televised wrestling from Los Angeles. Billed as “The Champ,” Pazandak took on all pretenders — amateur or pro — to his crown and a pot of cash for nine months until TV wrestling switched stations and he became master of a similar “Wrestling Jackpot” segment. 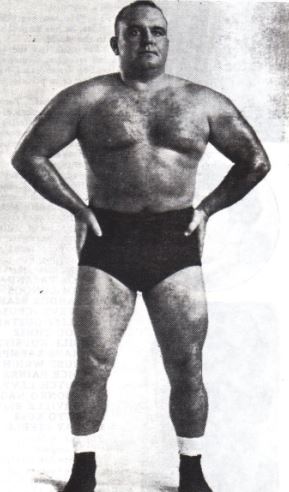 Long before Bill Goldberg’s winning streak, Pazandak’s undefeated record on the West Coast was attracting attention as the Long Beach Press-Telegram called him “the most feared man in the wrestling ranks.” When Pazandak returned to his home state of Minnesota, he issued a similar challenge — $1,000 to any one, amateur or pro, would could pin him in 30 minutes or less. It took future American Wrestling Association World champ Verne Gagne — whom Pazandak helped train — to accomplish the task.

Pazandak, who is being inducted today into the Professional Wrestling Hall of Fame in Wichita Falls, Texas, was a champ of another kind, too.

As an amateur heavyweight, he won two AAU championships in the Northwest and went on to wrestle at the University of Minnesota before he turned pro in 1937.

He made his professional debut in front of his hometown Minneapolis fans when he was just 22, going to a 20-minute draw with Al Loset. Pazandak, who went about 5-foot-9 and 230 pounds. Within a year, he was travelling around the country from Massachusetts to North Carolina to Maryland, mostly as a semi-main event performer.

However, he lost some of his prime wrestling years to World War II. He served as a sergeant with the 175th Field Artillery of the U.S. Army in Italy and Africa before returning stateside in 1944. In all, Pazandak saw 624 days of active combat. Pazandak “is forever issuing challenges to keep in shape,” the Associated Press said when it checked in on him in 1944. He got his wish in October 1945, when he returned to the mat in Minneapolis and beat Ray Steele, a former world champ and member of the Pro Wrestling Hall of Fame.

Clever and experienced grappler who hails from Minneapolis … Joe is one of the game’s most colorful wrestlers … Has been nicknamed “Champ” … A consistent winner … Introduced to wrestling by the famous Stecher Brothers … Is a graduate from the University of Minnesota … Was undefeated as an amateur … Pazandak has toured the world as a wrestler … He stands 5’9″ and weighs 240 lbs.

As important as his in-ring work was Pazandak’s influence on a generation of wrestlers. He served as a bird dog and mentor for many young talents.

In 1948, Pazandak was hired to coach amateur wrestlers in New Zealand for a season. He also worked with Karl Pojello, an old-time Lithuanian immigrant who schooled a young Rip Hawk in Chicago.

“On Sundays, our day off, [Pojello] would bring in like Ruffy Silverstein, Joe Pazandak, guys like this who would kind of run us through the mill. … They come down and literally beat the hell out of us every Sunday. We had that to look forward to on our day off,” said Hawk.

Much of Pazandak’s bird dog work came in conjunction with Tony Stecher, the Minneapolis promoter who helped launch the career of “The Champ” out of college. George Gordienko was one of their finds. “I stayed with Joe and we worked out daily unless he made a long trip somewhere,” said Gordienko. “Joe had more confidence when he was at home and he could handle me at first. However, after about a year I could hold my own even for an hour or more.”

Gagne, Larry Hennig, Stan “Big K” Kowalski, Pat O’Connor … the list of wrestlers who worked at least a little with Pazandak is an impressive one.

Kowalski said that Pazandak and Sandor Szabo out in Los Angeles were his primary teachers. “Joe taught me how to wrestle underneath, and [Sandor] taught me how to get nasty,” said Kowalski. “Szabo taught me how to really wrestle, counters and counter-counters and escapes. I put the two together, and that’s when I started climbing in the ring and winning. I attribute those two guys with quite a bit of my success.”

Fritz von Goering is another, and he said that Pazandak wanted a little more physical labour than was expected. He lived at Pazandak’s home and trained alongside Gordienko and O’Connor.

“All three of us moved into his house. We lived with him for a while, while we were being trained,” said von Goering. “I had to work my contract off with Joe, heh, heh, so that meant getting up every morning at six o’clock and we were mixing concrete in a wheelbarrow the old, hard way with a hoe. We worked from six to 12 every day, and then we trained. His training was rough. He didn’t pull any punches, he didn’t hold back. Like, let’s go for a walk down to the end of the road with 300 pounds on your shoulders — try that with a 300-pound weight. I remember that was tough. But if you did it, then he’d ease off on you.”

Pazandak wound down his career in the late 1950s, mostly as a tag team wrestler in the Minneapolis territory. He died in December 1983 at 69.