‘Church’ intends to change how wrestlers are worshipped

In some Hollywood circles, wrestlers are seen as “circus lions,” but to Sinn Bodhi, they are actually “athletic thespians.”

“I don’t think Hollywood realizes just yet — and maybe they’re starting to realize with guys like The Rock and what have you — but I don’t think they’re realizing that wrestlers are really just athletic stage actors that are used to doing everything in one take,” said Bodhi, who will be featured in the wrestler-filled film Church. “We are very comfortable flying by the seat of our pants, very used to calling audibles and making snap decisions creatively, emotionally in our performance, and I think we will definitely bring that work ethic and that energy to the film.”

Others joining Bodhi in the film include Tommy Dreamer, John Morrison (now Johnny Mundo in Lucha Underground, Gangrel and Maria Kanellis, among others. 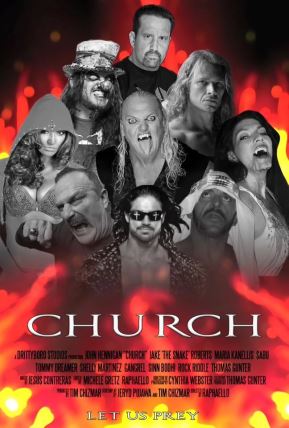 Church, produced by Tim Chizmar, essentially treats “religious iconography and characters” as if they are “100 percent real,” according to Chizmar, and is written by Chizmar two-time Oscar winner Jeryd Pojawa. It’s also in the midst of a Kickstarter campaign to aid in production costs.

As a fan of films like Ghost Rider and The Crow, Chizmar said he likes exploring the idea that “there’s something beyond death.”

“I feel like I’m not making people make a giant leap like we have Godzilla coming out of the ocean,” Chizmar said, “but it’s something a little bit more realistic because no matter where you are on the spectrum, everybody believes in a god, a devil, something like that.”

The film evolved from previous projects, according to Chizmar, including Rob Van Dam’s Extreme Championship Comedy Tour and a stint as an independent wrestling promoter in Pennsylvania.

“I always had an appreciation for wrestling, and I feel like they’re great actors. They have an opportunity to work on their own material and do their own stunts, so I feel like it’s something not enough people have capitalized on,” Chizmar said.

However, the idea of wrestlers crossing over into Hollywood is “evolving naturally,” according to Bodhi, partially because wrestlers are storytellers in their own right.

“I think it is also necessary because with WWE being essentially the only game in town, like there are some other great companies but they’re vastly smaller and it’s not any kind of Coke and Pepsi situation with wrestling companies … I think WWE definitely needs competition for sure, but I think that competition could lie in the way of Hollywood.”

The presence of wrestlers — due to their build and physicality — also adds legitimacy to Hollywood, according to Bodhi.

“I remember watching one of the Blade movies, the one with Triple H,” Bodhi said. “He was huge and he was ominous and then you’ve got a whole bunch of extras with fangs in, but they’re a bunch of scrawny kids with fangs. It wasn’t entirely scary, but if you had some bigger guys that knew how to move and convey how scary they were supposed to be … then you put the fangs and all the fancy costumes on, then I think you’d be off to the races.”

Additionally, Chizmar said wrestlers have a built-in fan base and he also wants to show people that “there are more wrestling actors than Batista and The Rock.”

“My good friend David DeFalco is the one who wrote and directed Batista in his very first movie Wrong Side of Town, and he’s the one who created all of the connections to lead (Batista) to Guardians of the Galaxy,” Chizmar said. “So I’ve seen it happen. I’ve watched it happen for other people, and I would love to be able to do that for these guys.”

Bodhi, who runs a promotion called Freakshow Wrestling, said what makes Church different than other films starring wrestlers is that “it will warrant a wrestling fanbase, but it has got nothing to do with wrestling.”

“I like using the example on Freakshow Wrestling as I’ll use for Church in that when you watch Kindergarten Cop, it’s not that Arnold (Schwarzenneger) is some comedic genius, but he is such a character that you’re used to seeing in such specific surroundings that when you put him in such an absurd or different scenario, it’s genius by proxy of change.”

Chizmar also alluded to the progression in Schwarzenegger’s career from his first post-body building films like Hercules up to Kindergarten Cop.

“Now he’s a cop and nobody gave it a second thought because they slowly built him into it,” Chizmar said. “So nobody was like, ‘He’s a bodybuilder that wouldn’t work out.’ And so that’s what I’m trying to hopefully do with these guys.”

Chizmar said the executive producer and he have each put up funding for the film separate from Kickstarter, but “it has grown in celebrity names” and other aspects. There are multiple versions of a script depending on how much funding is available.

“Right now, we have the budget to shoot a movie in seven days in this one studio and utilizing pretty much all of the cast, but if we can reach at least our minimum goal — and we have stretch goals as well — then we can increase everything. We can make it bigger. We can have fight outs on a semi on the freeway, and we can do some of the bigger things.”

Having a movie funded by fans allows everyone involved to “really give them what they want,” according to Bodhi. In return, contributors will receive various incentives depending on the amount they put toward the film.

“I think that’s great because me or any other wrestler wouldn’t be anything of what we are without fan support,” Bodhi said. “So why wouldn’t we generate this cool movie on the fuel of fan support? And why wouldn’t we give back to the fans that are our lifeblood?