Curry Man is the moniker Daniels uses in Japan but rarely, if ever, has used in the U.S. He donned the mask for his match with Ultimo Dragon for the wrestling event on in Royal Oak, Mich. 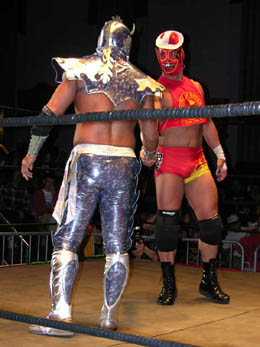 It was the first battle of the two international stars, and they did not disappoint. The two put out a solid 15-minute battle that ended with Ultimo Dragon getting his hand raised. The two were rewarded with a long standing ovation from the crowd of over 500.

The card was put on by local Detroit independent promotion IWR (Independent Wrestling Revolution). It was a rare Northern appearance for Lucha Libre stars.

“This was one of my favorite shows ever,” said Danny Harrison, who has attended dozens of shows over the past 20 years. “You don’t see these matches on television, and that’s why it’s amazing to see live.”

One of the other big matches of the night was the show stealer as Rey Misterio, Black Tiger and Dr. Wagner Jr. all fought each other. The three battled both in the ring and outside it. The 20-minute match really showed how amazing Lucha Libre can be if seen live. Dr. Wagner Jr. came out on top, and the crowd let the three know how much they appreciated their effort with a long standing ovation.

Also as part of the night, Mil Mascaras showed he can still be “Sky High” as he and Sabu defeated local wrestlers N8 Mattson and Conrady Kennedy III. Mascaras, whose age is nearing 70, moved around the ring and off the top rope like someone half his age.

Also on the card:

The show was very well organized. The production and set-up was great, and the venue was perfect. They held the show at the Royal Oak Music Theatre, which holds small concerts in a Detroit suburb and set-up the perfect environment for a wrestling event of this kind.

“I hope the fans left with a true feeling of having been entertained,” expressed Bubba MacKenzie, the promoter of the show.

MacKenzie, used amazing production values to market the show on DVD including someone who has experience filming things for National Geographic and rock shows. The first two “¡Revolucha!” events are already available on DVD on the IWR Web Site (www.iwrwrestling.com) and feature such names as LA Park, El Hijo Del Santo, Christopher Daniels, Konnan, Super Parka and the stars of the IWR.