LAS VEGAS — Tag team wrestling was in the spotlight on Tuesday night at the Cauliflower Alley Club reunion’s Baloney Blowout, with the High Flyers, Greg Gagne and Jim Brunzell, in the main event slot. 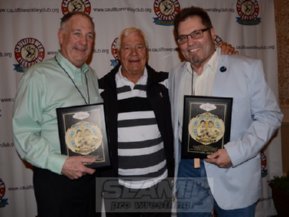 The duo have known each other since they were 17 years old, playing football together in college. Their friendship was further built by the fact that they played a part in introducing each other to their wives.

But a wrestler is only as good as his opponent in the ring, reminded Brunzell, who praised their foes in the AWA in the 1970s and early 1980s.

“We had unbelievable talent” to work with, said Brunzell. “It was hard to have a bad match.”

One of those opponents was Pat Patterson, who introduced the High Flyers with a hilarious story. In an era when homosexuals found a lot of difficulty fitting in, Patterson’s reputation preceded him. After meeting Patterson and wrestling him, Brunzell and Gagne found themselves in the communal shower. Patterson kept purposely dropping the soap and bending over. Eventually Gagne was brave enough to pick it up and wash Patterson’s back.

“They weren’t sure about Pat Patterson,” said Patterson, who has a book coming out this summer that he called freeing, since he was able to openly talk about his life.

“When it comes to wrestling, these guys were good,” said Patterson. “They were so professional and were very, very devoted to what they were doing.”

Brunzell started off the “match,” and took Patterson’s bait, recalled being “looked over” by the newcomer to the AWA territory. Brunzell said that Patterson warned them, “Remember this, if I ever get behind you, you’re screwed.”

“Pat never got behind me,” joked Brunzell.

Bobby “The Brain” Heenan was also singled out as an incredible talent as both a manager and a wrestler. Heenan had been at the banquet earlier, getting a standing ovation, and saluting the crowd with a raised middle finger. Another of the other AWA talents that the High Flyers worked with was Larry “The Ax” Hennig. “He used to beat the shit out of me every night until I learned how to make a comeback,” said Brunzell, who then turned to make the hot tag to Gagne.

“Jim was just a phenomenal partner for me. We just really jibed,” said Gagne, who then got very emotional talking about his family, the accomplishments of his children, and his wife, Mary, who recently had surgery for pancreatic cancer. He praised her as the “toughest woman I’ve ever known,” and thanked her for really raising their children, ensuring that they got excellent educations.

The last word, though, was for their trainer, Verne Gagne, who ran a wrestling camp in 1972 with Billy Robinson. Others in that camp — six hours a day, six days a week for three months — were Ric Flair, the Iron Sheik, Bob Bruggers and Ken Patera.

“Verne, this one’s for you,” Greg said to his father, who died earlier this year.

The rest of the evening sped by. Having learned from past experiences that a wrestler on a microphone, unsupervised and without a deadline, can be a dangerous and exhausting thing, the CAC did its best to crack down on time-hogs, establishing a three-minute limit to introductions, and 10 minutes for honourees.

Starting out the proceedings was a tribute to the late Nick Bockwinkel, who had been president of the CAC. After a video presentation, Bob Bockwinkel, Nick’s brother, took to the stage.

“He was that smart and intelligent a brother as he portrayed in his wrestling career,” said Bockwinkel. He shared some stories of how “Nicky” loved to build things, how he had designed a house by the time he was 21 years old, and how he got away with wrestling while in the army. With a grandfather who wrestled in mining camps in the 1910s and a father, Warren Bockwinkel, Nick seemed destined to be a pro wrestler. “He knew how to get the job done,” concluded his brother.

Emily Miller and Patsy Hughes, two fans from North Carolina, were presented with the Red Bastien Friendship award, the first time that two people were awarded at the first time. “This is a big surprise, a big surprise, and I’m going to kill them all when I get home,” said Miller, who has been battling cancer.

The Reel Award was presented to Howard “Pepper” Martin, originally from Hamilton, Ontario. With hundreds of film and theatre roles under his belt, following a wrestling career, he fell into acting.

Introducing Martin was Terry Funk, who credited Martin with inspiring him to make the leap into acting as well. But he also told a story of how Martin portrayed Batman in the Funk-run Amarillo territory.

Martin stressed from the start that his would all be “true stories.” He talked about breaking into acting, and fighting against the “big and dumb” stereotype that existed. He got an early break in acting on Hondo and rode it all from there. But he never forgot what helped him get there: “If it wasn’t for wrestling, I wouldn’t even be standing here.”

As well, Martin thanked his wife of 60 years, Jordy, and gave a plug for his new book. “Baby needs a new pair of shoes,” he said.

Earlier in the evening, the co-hosts worked the room, talking to some of the folks in attendance. The biggest reactions were for Bobby “The Brain” Heenan, who got a standing ovation, and the back-and-forth between Gerry Brisco and Terry Funk.

Announcer Mean Gene Okerlund definitely had the line of the night, though, and an appropriate one given the Las Vegas location. “It’s a hobby of mine I’ve been working on through the years. It’s called drinking,” cracked Okerlund to many laughs. “I like to get shit-faced.”

Up next on Wednesday are some more seminars and the grand finale, the gala banquet when the rest of the awards are given out.