DDP unveils ‘The Resurrection of Jake The Snake’

When Diamond Dallas Page began helping Jake “The Snake” Roberts on a path to sobriety, the goal was for Roberts to “be able to walk away from our business with his head held high.”

“That meant one thing — that he would be inducted in the (WWE) Hall of Fame,” Page said. “Now, I never said that to him, but that was the dream.” 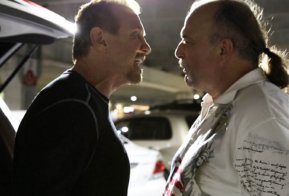 Diamond Dallas Page and Jake Roberts from the film Resurrection of Jake the Snake.

Two years ago, the WWE legend’s journey culminated in the honor — with the highs and lows along the way being recorded for Page’s documentary, The Resurrection of Jake the Snake.

The innovator of DDPYoga (ddpyoga.com) said he made the documentary — which he described as a “dark” at times but also “the most inspirational movie you’ll ever watch” — as a way to repay Roberts.

“I always say without Dusty Rhodes, there is no Diamond Dallas Page, but without Jake ‘The Snake’ Roberts, there is no three-time world champion,” Page said. “He taught me a lot. He mentored me and believed in me in a time when nobody did, so I always wanted to repay him.”

Page said he had previously tried to help Roberts with his struggles, which are documented early on in Resurrection.

When Page told others about helping Roberts get sober, he said they looked at him like he was crazy, questioning why he would put his company on the line.

While wrestling’s past is littered with drug and alcohol abuse, none of those struggles, according to Page, have been more public than that of Roberts or Scott Hall, who also is featured in the documentary. Roberts became headline news for TMZ in 2008 when he reportedly exposed himself in the ring during an independent show, while Hall’s struggles were featured on ESPN e60 in 2011.

“You go through what Jake went through and everybody knowing where he was at, and he was pretty much blackballed from WWE,” Page said. “I wanted to try and change that, and I knew the only way to do that was to try and get him sober.”

But what he didn’t realize at the time was that Roberts wasn’t sober from the onset of filming. 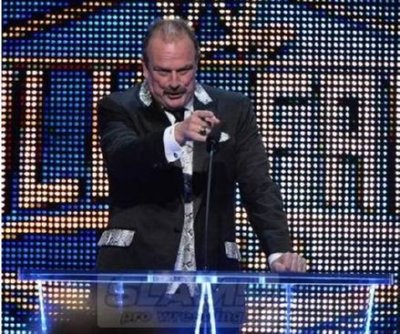 Jake Roberts at the WWE Hall of Fame ceremony in 2014. Photo by Mike Mastrandrea

When Page and his film crew arrived at Roberts’ home and Page asked him how long it had been since he did drugs, Roberts told him about a month ago.

“That set me back a little bit because I know if Jake said a month ago, he means yesterday. That’s the watered-down version of yesterday,” Page said.

While the documentary is filled with both relapses and moments of hope, Page said Roberts “had no idea what we were even filming or even putting together.” Roberts did not see the documentary until it had been through about 10 rounds of editing, according to Page.

“To me, it had to be a movie of redemption, and it had to show all of the negative, crazy shit that happened,” said Page, who had wondered with co-producer Steve Yu if anyone would ever see the film.

“We didn’t know,” Page said. “I was never going to release the movie unless Jake was straight.”

When Page sat Roberts down to watch the documentary, Roberts had to follow two rules — He couldn’t leave the room and he had to stay to the end. The film’s namesake “didn’t just like it, he loved it,” according to Page. But the 2014 WWE Hall of Famer did not like “watching himself when he was screwing up and getting caught.”

“Getting someone who’s an addict to see their behavior when they are intoxicated or screwed up on drugs, it’s really hard for them to watch,” Page said. “So, I’m sure Jake never thought anyone was going to see the movie until it was at the end, and I really don’t think he even really gave much credence to it till he was sober a whole year straight, with no screw ups, because that’s when the fog starts to lift off an addict.”

Roberts finding out he would be inducted into the WWE Hall of Fame is not in the documentary, but the moment Roberts told Page had to be filmed, according to the former world champion.

“If (our co-producer) Steve doesn’t do that, we never get that on film. Especially as real and as raw,” Page said. “That’s where I break down because that was like, ‘Holy shit! He did it.'”

With the goal set for Roberts to leave the industry with his “head held high,” it doesn’t get better than the Hall of Fame, according to Page.

“It’s bigger than world championships. It’s bigger than everything. It’s an accumulation of your work,” Page said. “So for him to walk away from that, I don’t see whether it could be a better ending.”