One of the most unique announcing trios in wrestling history had to have been at WrestleMania II, with the flamboyant and opinionated Jesse “The Body” Ventura, the regal Lord Alfred Hayes and the sultry “Mistress of the Dark” Elvira. 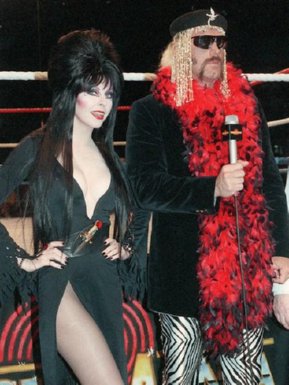 Elvira and Jesse “The Body” Ventura at WrestleMania II.

SLAM! Wrestling recently caught up with Elvira, Cassandra Peterson, at the Niagara Falls Comic Con to talk about her experience.

It all came about on April 7, 1986, and the WWF upped the stakes from its first WrestleMania, making an entertainment spectacle that had never been seen before. A perfect meshing of celebrity, wrestling and over the top hype brought millions of viewers to see the event. WWF owner Vince McMahon debuted the second chapter of his wrestling extravaganza that threaded together the major media markets of the USA, emanating from three arenas: the Nassau Veterans Memorial Coliseum in Uniondale, New York, the Rosemont Horizon in Chicago, Illinois, and the Los Angeles Memorial Sports Arena in Los Angeles, California.

Elvira was in L.A., with Ventura and Hayes. In New York, actress Susan Saint James called the action alongside Vince McMahon (who was then “just” a commentator); in Chicago, it was Gorilla Monsoon and Mean Gene Okerlund with actress Cathy Lee Crosby.

While none of the celebrity commentators were experienced sports announcers they certainly brought more attention to the event.

Elvira was known as the seductive, vampire like hostess of a widely popular late night horror show. Her wacky sense of humour and alluring outfit mesmerized viewers across North America. She became a pop culture icon that endorsed everything from Elvira Halloween costumes to beer. Elvira was funny, quirky and over the top, perfect for Wrestlemania.

“I was a big wrestling fan,” Elvira explained. “When I was a child my dad and I, that was what we liked to watch together.”

She was excited to be a part of the event and felt comfortable being around the bruisers of the ring.

“All of those wrestlers are like my peeps, you know,” she chuckled.

The magnitude of the event sunk in — the main event in Los Angeles was WWF champion Hulk Hogan prevailing over King Kong Bundy in a “big blue” cage match — and Elvira realized that she was not a trained wrestling broadcaster.

“So, I was a little out of my element there, but I have to say that I had a lot of fun with a couple of the wrestlers especially Jesse ‘The Body’ Ventura,” gushed Elvira. “He was great! We had a blast together.”

While she may have been a rookie in the wrestling world she was still an entertainer.

“That was a little nerve-wracking because I didn’t know exactly what to say, but I got through it okay,” said Elvira. “It was just a fun show to do because it was a huge, awesome thing right at that time. It was huge. I mean it still is.”

While she lent her celebrity to the event, Elvira felt that WrestleMania helped her career.

“They remember me all the time for it,” said Elvira. “For a lot of people that was their first exposure to Elvira. So, it was kind of a big boost for me at that time in the ratings and everything.”