Much respect for the hustle of loyal fans with Cena book

Hustle, Loyalty, Respect: The World of John Cena is the latest book from WWE, and it is a coffee table book, heavy on pictures but with plenty of info. To try to accurately convey who it’s for and what’s in it, we have signed up a father-son tag team to review it — Greg Oliver and his nine-year-old wrestling fanatic/Cena-loving son, Quinn.

Cue the music, and read the review! 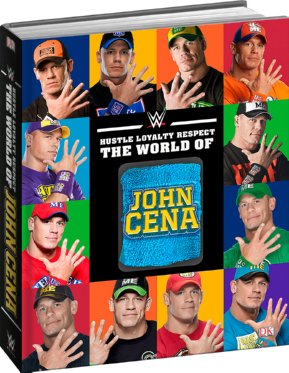 Overall, Hustle, Loyalty, Respect: The World of John Cena had lots of great photos, but the layout itself was a bit confusing.

Here are some more of my thoughts on it, kind of random, like the book itself.

Description of his motto is completely useless, as you should know what hustle, loyalty and respect mean already.

There were some cool things, including the head-to-toe Cena, his collection of cars, the descriptions of his moves, and the list of the best Attitude Adjustments ever.

Near the back was a section on Cena’s sense of humour and it was really funny, listing some of his best quips, and yet the section on his wit and wisdom wasn’t as good.

There were a number of galleries with his rivals, including The Rock, Big Show, Edge, Nexus and more, that I knew already, but maybe it would be interesting to someone who had seen a lot less wrestling.The section on his childhood was probably the most interesting part because it was all new to me.

All that said, I really don’t know what else there could have been in here other than a real database on his rivals.

If I needed to look up something on John Cena, it’s a good place to go, but I am not sure it’s really a book for someone who already knows a lot about WWE.

But I will get to wear the John Cena wristband that came with the book to the next wrestling show that I go to.

All that’s missing from the new coffee table book, Hustle, Loyalty, Respect: The World of John Cena, are trumpets blaring.

There’s plenty in there for casual and hardcore fans alike, but no real rhyme or reason as to what appears where. It’s a little thing, but it’s indicative of a design problem I have with the book — the pullout quotes from the various wrestlers are actually stand-alone quotes, meaning they don’t appear in the actual text.Is that being picky? Probably.

But sitting down to try to actually, you know, read it and not just look at the oodles and oodles of great Cena photos — someone spend a lot of time on routing photos — through the years can only be done in short periods, given the quirky and illogical layout. It doesn’t go from A to B, from his early days to recent times. Instead, it’s like they took a set of Cena dice and rolled them to come up with section placement.

It’s broken down into five main sections: Who Is John Cena?; John Cena Rises; The Champ Is Here; Cenation; John Cena’s Legacy. The timeline at the end can only be charitably described as filler, though I suppose some might appreciate having all John Cena’s significant matches listed in one spot.

Do you see the John Cena pattern? Get used to seeing John Cena, even if opponents can’t — I counted his name 26 times by page 12, including the title pages. And you know what name was missing? Author Steve Pantaleo doesn’t get credit on the cover or title pages, confined to the copyright page at the back of the book.

Like reading the phrase “John Cena” (fortunately without a registered trademark symbol, though I suspect someone along the way probably wanted it in there at every reference) again and again, the very term “Cenation” seems so forced and made up. (It’s appeared FOUR times in nearly 20 years of SLAM! Wrestling writing, in case you are wondering, this being the fifth.)It’s beginning to sound like I’m a Cena-hater, and I’m not. I have always enjoyed him for what he is, and absolutely respect him for his accomplishments. Yes, there are times that he’s been shoved down our throats, but at other times, he was the one solid, believable performer on a weak roster.

The whole “Let’s Go Cena” and “Cena Sucks!” dichotomy of the WWE Universe — another forced term — is addressed, which was a little surprise. But it speaks to Cena’s determination to walk the path of goodness through the years.

The basics of his rise from a Massachusetts fan-boy to a workout fiend and pro wrestler are told in reasonable-enough detail. It should be said that at no point is this anything close to an autobiography, nor does it try to be. Like a new, bright pastel-colour Cena T-shirt, it’s told in broad strokes, the sometimes-hard-to-read text on coloured backgrounds only meant to compliment and explain photos.

It sticks to storylines for his best matches and best feuds, but mainly the ones deemed safe. CM Punk is mentioned plenty of times, but he is not ever featured as one of the “rivals” like Edge or Chris Jericho. Likewise, Eddie Guerrero isn’t a featured rival, and probably should have been over, say, Nexus.I guess it’s a testament to how long he’s been around and how long that I’ve been watching wrestling that I found myself often going, “Oh, I forgot about that.” Other things no doubt go right over the head of newer fans but will be treasured memories for old-schoolers.

Of course, the victors write the history books, so if WWE claims that Harley Race was the first U.S. champion, winning it in 1975, then it must be true.

The one thing that was left out of the book was Cena and his love interests, which is odd given how featured his relationship to Nikki Bella has been on Total Divas. So storyline kisses with A.J. Lee, Eve, or Maria Kanellis don’t matter. His real-life divorce from his first wife is not there.

Hustle, Loyalty, Respect: The World of John Cena is not quite a love-in, but it’s pretty darn close. Those loyal to Cena will hustle to the bookstore and respect what they find. Others, maybe not so much.

QUINN & GREG OLIVER are the co-authors of Duck with the Puck, which received praise from Don Cherry: “You described how I felt as a young boy. I could hardly wait for the ice to freeze. Great job! You will follow your Dad with books.” Order the book (and others by Greg) at Oliverbooks.ca.