‘Supercop’ Dick Justice on a mission 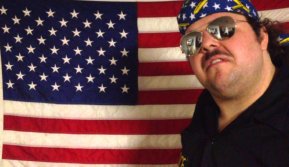 Out of darkness comes light. Where there is despair there will be hope. Where there is crime there is justice, “Supercop” Dick Justice! The red-blooded, All-American patriot and friendly neighbourhood lawman is cleaning up the wrestling rings of North America.

Over the past year Dick Justice has been making a name for himself with his exuberant personality and creative comedic style that has been connecting with fans. It was not always that way. Justice, John Taddeo, was trained to wrestle by former WWE star Colin Delaney and Jimmy Olsen in Rochester, New York.

While he took to the training, once completed he couldn’t get regular bookings. He was frustrated. He started to get a sour attitude and bemoan the opportunities that others seemed to be getting instead of him. He was in a slump. He was depressed. He was angry.

One day he decided to take a good look in the mirror and ask himself “why?” He was 400 pounds, out of shape. Going out of the house and getting dressed was uncomfortable. He was able to answer his question. He wasn’t frustrated with the wrestling business, he was frustrated with himself. He was holding himself back and he had the power to change.

With great resolve Justice started going to the gym and soon found himself 100 pounds lighter. He recommitted to the sport of professional wrestling and, armed with a better attitude, he began to get some bookings.

By chance he was booked in a tag team match with a gentleman who had a police officer gimmick. Justice decided to go along with his partner and dress up as a constable as well. During the match he noticed that the crowd was reacting to his character in a positive way. Not only that, but Justice felt comfortable in this disguise. With that Dick Justice was born.

As a child Justice was first bitten by the wrestling bug during the Monday Night Wars. He turned on his television and came across WCW’s Monday Nitro from Rochester. He was captivated by the showmanship, athleticism and production. Being a big fan of the Power Rangers, Justice thought that the wrestlers were just like the kids show heroes, but live! That one show changed his life. At eight years old his world became all things wrestling. No longer could he just play with his toys, instead they became combatants in never ending wrestling matches.

This obsession carried on through his teen years and soon he found a pamphlet that led him to wrestling school. With the utmost respect for his trainers Justice felt that the foundation they gave him is what has made him successful in the ring.

“They taught me about promos, about letting things settle. The really drilled me on the little things, which became the important things,” Justice, 25, explained at a recent Empire State Wrestling show. “You can do moves, but if you don’t put any substance or meaning behind them they are just moves. What they were really good on was teaching me to put substance behind everything. It is exactly the meaning behind the moves, the build-up to a move, the ring positioning, the foot work, all the little things that go into making big things. The little steps that go into making big steps they hammered into me.”

The little steps that make the big steps have been the theme of his young ring career. From overcoming his own negativity, improving his fitness and becoming a positive person has been a series of incremental improvements that has led to big jumps up the wrestling ladder.

Soon after taking on the police officer persona, Justice went on Amazon and ordered every buddy cop movie he could find. He studied the films and wondered what was it about them that were funny? What could he take from those movies and incorporate into his wrestling performance?

His name is a head turner and smile maker when people hear it. Dick Justice is certainly a memorable name.

“They like the dick puns,” chuckled Justice. “That’s fun.”

His ill-fitting policeman outfit, mustache, aviator glasses and flowing curly hair make for an amusing image. He bursts through the curtain with such energy that the audience must look at him. One of the funnier parts of his routine is when he pulls out his imaginary gun, which is just his hand, to stop the evil doers. 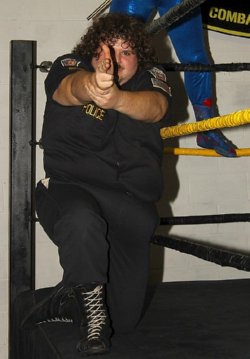 Watch out, Dick Justice shoots back!

He loves to be interactive with the crowd. “Me playing that underdog, super hero that the fans want to say, ‘Come on man. You can do it.’ I try to make the matches so everybody is involved,” said Justice passionately. “I do the jabs that they like and then the big wind up where the fans like to so ‘Oooohhhh!’ and I throw the punch. I like to be interactive. I guess it is kinda like improv where it is me trying to put on a skit and tell a story with comedy involved.”

It’s a challenge trying to be unique.

Justice has had some big thrills over the last year. He has wrestled Japanese comedy wrestler Kikutaru, he was in the Wrestling Road Diaries Three and did a three-way match with Space Monkey and Shockwave the Robot. Another highlight was being approached by Savage Tech Studios to make the movie Dick Justice Super Cop Part One which can be found on YouTube.

Dick Justice is not just a “supercop,” but a super fun wrestler as well. Watch out evil doers. Justice will be served in the wrestling ring of your hometown.