Holy cow, this slipped up on me. It’s been 20 years since Canoe.ca launched into the Internet waters. While the SLAM! Wrestling portion of the website wasn’t there on Day 1, March 4, 1996, it wasn’t too long after that we started it.

As one of those “Day Oners” who started Canoe, I find myself overwhelmed with memories.

Indulge me while I reminisce.

Canoe.ca came out of the Toronto Sun and Sun Media Corp. I had worked at the Sun since 1991, when I landed a summer job in the library. Over the next five years, I did 13 different jobs at the Sun — some writing, lots of layout of entertainment and life pages (I got to select the SUNShine Boy some days!), graphics, advertorial, proofreading. 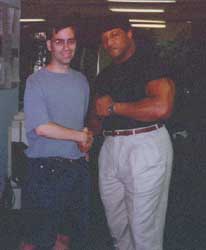 Greg Oliver is the puny one with Faarooq (Ron Simmons) in the Canoe office.

All the experiences helped me excel in the job at Canoe as an online editor, mainly because I knew the people at the newspapers and how things worked getting the page to print. Actually getting hired wasn’t a big deal, as I went to one of my bosses, Hugh Stuart, and said, “When you go, I want to go too.” He said okay, and I went up to the job I was doing at that particular moment, and told Pete Vamos, “Hugh’s hiring. Go talk to him.” He did and came onboard … though the Canoe.ca name didn’t come until later.

Always an early riser, and eager, I was the second one in the office when we started that day in October 1995, Graham Duffy beating me into our new space by a little.

It took some time, but more people were brought on board. Of note for readers here, it was the hiring of John Powell that resulted in SLAM! Wrestling.

There weren’t many of us building the actual Canoe website — by hand with raw HTML code it should be noted — so John and I became friends. Wrestling was just taking off again with the Monday Night Wars, and the Internet was building momentum too. I still chuckle at some of the disparaging comments we heard from colleagues at the Sun that didn’t “get” the Internet and what it would become.

Well, I had a Toronto Freenet email account, so I was online early!

John fiddled around with ideas for the wrestling site, and it wasn’t too longer after the site went live that we began populating the SLAM! Wrestling section. We were fortunate that there were wrestling columns in the Sun papers in Toronto (Glenn Cole, R.I.P.), Ottawa (Tim Baines, a.k.a. Mr. X), and Calgary (T.J. Madigan and Bret “Hitman” Hart). Later, the Winnipeg Sun came into the fold, so we got the column from Cyrus Don Callis, and other contributions from “Deadline” Doug Lunney.

Long a champion for Canadian professional wrestling history, I set up the Canadian Pro Wrestling Hall of Fame, and started adding names. That grew to the point that many wrestlers talk about their bios being added as a career highlight. Reconnecting with old friends from my days running the Canadian Wrestling Report newsletter was a plus.

John loved watching the product, so the TV reports stemmed from his fertile mind. The PPV reports especially benefited from John’s strange sense of humour.

From there, it just started rolling, er, paddling.

Traffic was always there for the wrestling section, and it was consistently the number two sport on the entire site, behind hockey. There were times when the wrestling numbers were BETTER than hockey too, but they weren’t always the best of days, such as when Owen Hart died.

The Canoe staff came to appreciate what we brought to the site, weird and wacky as it may have been.

We did live chats in the office with the likes of Faarooq (Ron Simmons), Mad Dog Vachon (whom I had to explain what the Internet was), and the Quebecers (Jacques Rougeau Jr. and Pierre Carl Ouelet). The WWF, as it was then known, had a satellite office in Toronto with its own staff and wonderful public relations people who knew what Canoe.ca brought to the table … even if the world itself was still figuring out this Internet thing.

Through the years, others joined the team. Both Nick Tylwalk and Bob Kapur have been around almost the whole time, which is remarkable considering both have regular jobs! There were others in Canoe office who loved wrestling too, and some stuck around to continue helping, like Jon Waldman, who co-edited the book SLAM! Wrestling: Shocking Stories from the Squared Circle. Others, like Alex Ristic, John Molinaro and Stephen Larouche went on to other things — and it was special in the cases of Molinaro and Larouche, since both had subscribed to my newsletter!

Even writing this, I feel a pang of regret over not staying in touch with some of them, and not knowing what happened to many of my old writers. But that’s a column for another day.

Canoe.ca has gone through many changes, faced many issues and owners, survived through choppy waters. The fundamental difference 20 years later is that the newspapers are completely on board, which was not the case at the beginning.

So let’s end with a hearty Happy Birthday to Canoe.ca, our host and our friend through the years.

Here’s to many more happy years together.