The grand re-opening of the Pro Wrestling Hall of Fame in its new home of Wichita Falls, Texas, is only weeks away says organizer “Cowboy” Johnny Mantell — making it ready for those heading through town to or from Dallas for WrestleMania.

“Now it’s balls to the wall to get everything up and on the walls and ready to open. It’s coming along,” Mantell told SLAM! Wrestling Wednesday evening, after another hard day’s work. “We’re really anxious to get the museum part open.” 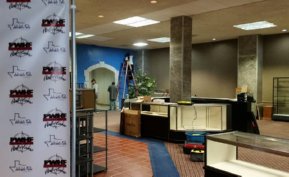 A shot looking in at the work-in-progress Pro Wrestling Hall of Fame. Photos by K Kreymer Downs

The volunteers are to the point where the artifacts that had been shipped by truck from Amsterdam, New York, are unloaded and decisions are being made about what’s going up and what is not.

Mantell had been warned by former PWHF president Tony Vellano that there was much that was not on display at its old home on the main street of Amsterdam, but the sheer volume of material has been awe-inspiring.

A retired wrestler himself, Mantell finds memory after memory as he goes through the artifacts. But he can’t make any personal connection to one of the most unique and aged treasures — a wrestling ring that is believed to date from around the turn of the century.

The treasured old ring will be set up for the PWHF induction weekend, May 20-21, but then only a portion will be out. “I’m not going to take up an 18 x 18 foot area to put a whole ring in forever,” he said.

The word “treasured” applies to the new location too, in a historic building called affectionately “Big Blue” by the locals.

“This is an iconic building in downtown Wichita Falls. It had been shut down for a while. These investors came in and bought it,” explained Mantell.

There were a number of unexpected hitches that have delayed the opening (he had hoped for February 29, for a leap year tie-in).

“We really thought it was just going to be a couple little fixes,” chuckled Mantell, launching into a laundry list of issues.

“The vandals had gotten to this building and literally pulled wire after wire out of tubing in the ceilings,” he said. “There was just no wire in place. The heating system in this building was an old boiler system on the roof.” Everything was re-wired, and a new heating and cooling system was set up.

Mantell didn’t leave his combativeness behind when he left wrestling. There was a discussion over a potential fire door that took way longer than he thought it would, as discussions between the city and the architect dragged on. “I held out that I had to put a glass door in there. I didn’t want a metal door. I eventually won.”

With everything on one floor, the new PWHF is much more accessible than the old one. There is already talk of expanding to a second floor.

“All these issues just slowed us up,” he said. “If you’re having a lot of construction going on in the building, it’s hard to paint and clean. It’s just impossible.”

But the work has also drawn attention. Local media has been by to report on progress. Old friends, like wrestler Sam Houston, have come in to lend a hand painting.

And there’s daily encouragement from the residents of Wichita Falls.

“We were working there today and a dozen people came in wanting to know how soon we’re going to open. ‘When are you going to open?'” he said. “That’s like that every day.” The question is repeated when he goes out for lunch or stops to get gas.

“There’s an excitement and a buzz around the city that everybody tells me they haven’t felt there in many, many years,” he said.

The plan is for the museum to be open six days of the week, closed on Mondays. Don’t worry WrestleMania fans heading home on April 4th — it’ll be open that Monday.

“We’ve probably been contacted already by a hundred people that are driving in for WrestleMania that wanted to know if they can catch the museum on the way in or the way out,” said Mantell. “So we’re going to be open that entire week.”

There will be a $3 admission fee

“I want to make it family friendly,” he said. “We’re building a kids area where the kids can actually get into a facsimile of a ring and feel what ring feels like and feel the ropes. We’ve got an amateur wrestling dummy in there that they can feel what it feels like on the ground or whatever they want to do. It’s right in front of our counter, where there will be an attendant all the time.”

Mantell said that a handful of university students have been in touch about doing research in the eventual library full of wrestling materials.

Back to work to make the dream happen, Mantell remains positive on the whole experience.

“I’m hoping by the weekend I can really pinpoint a day to when we’re going to have our grand opening, the ribbon cutting,” he said.

He’s also bullish on induction weekend. Confirmed inductees from the Class of 2016 are Greg Valentine, Mean Gene Okerlund, Leilani Kai, as well as family members from Joe Pazandak and Hans Schmidt. There remains work to be done on that front too, convincing Steve Austin and Sgt. Slaughter to attend, and figuring out who will receive the honours for the late Earl McCready and High Chief Peter Maivia, as well as Blackjack Mulligan and Blackjack Lanza, both unable to attend for health reasons.