I was excited about the new Kayfabe Commentaries Raven’s Wrestler Rescue DVD, as I’m a fan of Bar Rescue and its host John Taffer. On paper, it seemed like a great concept and I still think that would be a great show for television if you did it with an independent promotion in the wrestling world. Imagine all those weekend warriors being told everything they do wrong by legends of wrestling.

Their first release might not be a clear home run but it is a definite base hit with a lot of potentials for more in the future. 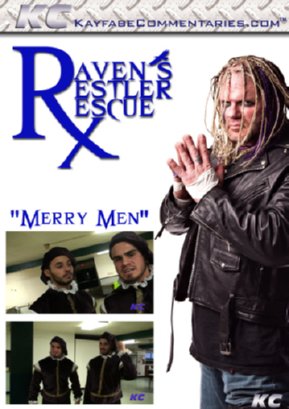 Raven comes off as, well, Raven, not caring enough and half laughing at his own ideas. A more hard-ass attitude might have been a better fit to anchor the concept but Raven is great in the creative aspect of explaining his vision until it get accepted and the wrestlers make it their own. Basically, there’s not enough yelling.

The premise is that Raven takes two green guys straight out of the Pro Wrestling Syndicate school and explains to them that their Italian Mob guy gimmick makes no sense. Instead of trying to turn them into superstars his whole idea is trying to make them work a comedy style gimmick with a lot of potential but also that they have the experience level to deliver on.

It might just be the most interesting aspect of the whole DVD — do only what you can do well. Not everyone out of wrestling school has potential to play serious main event wrestler. There is room for different things; you just need the right amount with great positioning. As Raven explains if you get something over that will not make it to the top of the card that doesn’t mean you can’t make money with it by selling merchandise. There is always room for the comedy act that is over on a card.

Raven goes through every aspect of the process of turning them form Italian Mob guys into Renaissance Men. That include costumes, but maybe they should have left the part about buying the costume at a Halloween store out. Still, you see Raven’s vision come to life slowly even if the production value is not quite Bar Rescue.

I loved the part where Raven teaches them about the “Rowboat spot,” which was a classic tag team spot until the mid-1990s. I love that spot. It’s fascinating to see the move perform in the ring later and the crowd get behind it. If I was a WWE tag team I would try to sneak that into my arsenal. I would have loved to have footage of one of the two wrestlers before the new gimmick. That’s one of the weak point as you don’t really have images or footage to explain the need for a change.

Raven is great specially in breaking down the match critically with them afterwards and in helping them putting the match together before. It makes it a totally different experience from most of those shoot-type DVD releases.

In conclusion, this is for all the independent wrestlers out there still searching themselves, you will learn something and understand the different possibilities and combinations that can turn your luck around and make you a hot commodity in your area for promoters and a lot of fun for the fans.

Can’t wait for the next one in this series, as it can only get better.