WrestleMania VI was the first time that the WWE had champion Hulk Hogan face another good guy, the Ultimate Warrior, for the title. For wrestling purists the match was not a classic scientific encounter, but the match drew the attention that was necessary for the event to be a success. One of those millions who watched the match was the five-year-old boy who would grow up to be the future “Mr. Ring of Honor” Roderick Strong.

Warrior versus Hogan was such a riveting match up for the youth. To him the bronzed Hogan stood out from the masses and became his unbeatable hero. At the end of the match Hogan ended up getting pinned by the Ultimate Warrior. Hogan left the ring with sadness in his eyes. Little did the former WWE champ know that in his home town of Tampa, Florida, Strong broke down, sobbing at his heroes’ demise. 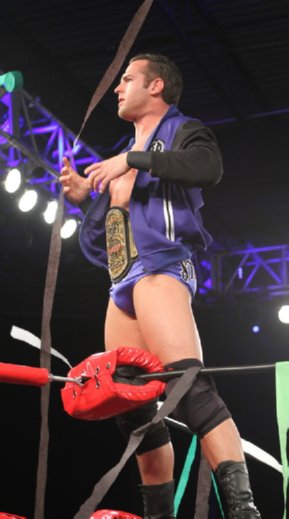 Strong and his father attended the closed circuit showing of WrestleMania six at Tampa’s Sundome. As his father carried him out of the arena in his arms, Strong had to be consoled by his father’s words. “It’s okay,” said his dad. “It’s okay, he will get him next time.” The emotional outpouring that came from Strong struck a deep chord within him that still resonates in his in ring performance today for Ring of Honor.

The current Ring of Honor television champion is the engine that keeps on going. His ring work continues to improve and he has shown that in classics against Bryan Danielson, CM Punk, Eddie Edwards, Nakamura and recently when he upended long-time TV champion Jay Lethal.

Perhaps this desire to improve comes from his solid training when he started out in the sport? Under the guidance of former WWE tag team champion Jim “The Anvil” Neidhart, Strong received a solid education in the fundamentals of wrestling.

“It was physical, but it was more about the basics,” said Strong with passion. “The basics was about hard work, Japan style with sit ups, squats, push-ups, a lot of bumps, a lot of rolls, a lot of conditioning. Actual wrestling wrestling was done very little. That is why I am just obsessed with the basics, the foot work, the body placement, have always been big things for me.”

For Strong these honed basics have allowed him to continue to up his game. After a recent match with Japanese grappler, Takaaki Watanabe, he was asked if there is a language barrier when working with a foreign opponent.

“Wrestling has no language barrier,” chuckled Strong. “It is physical based and you can tell a lot just from the body. When you are properly trained, like those guys are, the nonverbal communication, the little things you can pick up makes it easy. That is why I like traveling the world and learning the different styles is so important to taking your game to the next level.”

Over the next year Strong may have to put those nonverbal ring skills to work more often as New Japan Wrestling and Ring of Honor have signed a working agreement. Strong is looking forward to the challenge of introducing Ring of Honor’s style and crew to the Japanese wrestling fans.

“I think it is big because I see it as a commitment from New Japan to our company and our company to New Japan,” said Strong. “In the day and age when commitment is not the thing people stick to, it is great to see the relationship so strong. I think when the Japanese fans get a taste for the Ring of Honor guys they will fall in love with the product and that will help us internationally. It blows my mind still that we can get the two best wrestling companies in the world and we want to put on the best product we possibly can be together. It is a good feeling and it is exciting.”

He has been a long time stalwart for Ring of Honor and Strong still gets excited to get in the ring. When he discusses his ring work Strong is obviously proud of what he does and is hungry for more.

“The challenge, to be doing it for as long as I have, I just celebrated my 12th year in Ring of Honor and to be the best version of myself that I can be every time,” said Strong. “You know I set personal goals every time I go out there. For me it is not to just have a match, that isn’t good enough for me. I need to achieve something. No one knows exactly what it is, but for me, each time I just challenge myself.”

Part of those goals is connecting to the fans. Just like Hogan made an impression on the five year old Strong, he wants to make the same impression on audiences. It wasn’t as if Hulk Hogan sent verbal messages to Strong from the ring. It was in his body language, the way Hogan’s pain, suffering, rallies and success made him feel that still resonates with him today.

“For me it is the connection, the nonverbal connection that makes it special,” said Strong. “You could say nothing and show everything that you need to to make people care about you. To me that is the most amazing feeling.”

These feelings are not one-sided. Like any performer Strong feeds of the energy and emotions from the crowd. “Getting an emotion from them, to be able to do that for people when you are in there you get emotional too,” said Strong. “It becomes as real as the situation as you are portraying to make. So, it gets very intense and emotional.”

Roderick Strong is a true cultivator of his craft. “Mr. Ring of Honor” can’t wait to connect you to the story he is writing in the ring.