Ten hut! Stand at attention, maggots, and give me … a hell yeah? The Class of 2016 for the Pro Wrestling Hall of Fame has been announced and two of the biggest names are Sgt. Slaughter and “Stone Cold” Steve Austin. But perhaps the bigger news is that the PWHF is moving to Wichita Falls, Texas. 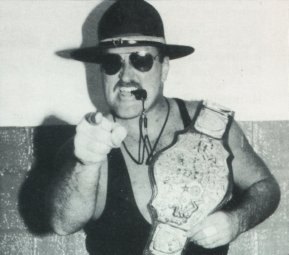 Sgt. Slaughter is a member of the Pro Wrestling Hall of fame Class of 2016.

This is the 15th induction class for the PWHF, which had been based in Amsterdam, New York; for the first few years, it was in Schenectady, NY.

“The PWHF will close its doors to the public at the end of November and start packing memorabilia to be displayed here in Texas,” said Tony Vellano, the man behind the PWHF since its inception. “We have been negotiating since February and kept it quiet until today.”

The new building is in the middle of downtown Wichita Falls, in the Annex of the First Wichita Building, known locally as Big Blue.

“It was time for the Hall to grow, and I think this is the place,” said Vellano, who will be stepping aside from his PWHF duties in favour of a board of directors comprised in part of community leaders. “I was and am very careful where I wanted to go, and I am comfortable this is it.”

Cowboy Johnny Mantell assumes the role as the president of the PWHF, and lives nearby. “The Professional Wrestling Hall of Fame honors the men and women in this business around the world,” Mantell said in a press release announcing the movie. “Professional wrestling has strong roots in Wichita Falls and we are proud to bring the Hall of Fame and Museum to Big Blue in downtown Wichita Falls.”

A big part of the decision was that the University of Texas at Arlington “has pledged to take all memorabilia that can be archived and will have the students work on that as school projects and community service,” said Vellano.

Henry Florsheim, president and CEO of the Wichita Falls Chamber of Commerce also was quoted in the press release: “Wrestling is a huge part of our culture; in fact, the largest crowds our coliseum ever draws are for professional wrestling. his is a huge feather in the cap for Downtown Wichita Falls and the city as a whole, and may well turn in to one of our largest tourism draws.”

So perhaps it is appropriate that one of the biggest names ever out of Texas — Stone Cold Steve Austin — is leading the Class of 2016, the first in Wichita Falls. Austin, of course, was the leading star of WWE’s Attitude Era, transcending the sport and into mainstream culture.

Slaughter (Bob Remus) was an apprentice wrestler in the AWA until morphing into a commanding drill sergeant who ruled in the Mid-Atlantic area and the WWWF. He became so famous that he was made into a GI Joe character, one of the few who had the power to step away from Vince McMahon and the owerpowering WWF of the 1980s.

Austin and Slaughter enter in the Modern Era division, from 1985 forward.

Going way back in time, the new hall of famers from the Pioneer Era (1865-1942) are Earl McCready and Joe Pazandak. McCready was one of the greatest amateur wrestlers ever out of Canada. He was a 1928 Olympian, and at Oklahoma A & M, McCready became the first-ever winner of three-straight NCAA wrestling championships, from 1928 to 1930. Then he turned professional and worked into the 1950s, a respected and feared veteran. In the 1930s, there were few as tough or well-traveled as Pazandak, who was originally from Minnesota, and fell into pro wrestling under the Stecher brothers. He’s probably most associated with the “Beat the Champ” TV title on KLTA in Los Angeles in the 1950s. Pazandak also trained the likes of George Gordienko and Stan “Krusher” Kowalski.

The Television Era (1943-1984) honourees are Hans Schmidt and Greg “The Hammer” Valentine. Schmidt was one of the most famous and hated heels of all time, a villanous French Canadian turned hated German; he headlined from the 1950s on the national Dumont network through the 1960s. Valentine had a four-decade run as a pro wrestler, including early stints as Babyface Nelson and Johnny Fargo as he didn’t feel ready to assume the Valentine name made famous by his father, Johnny Valentine.

For all the other categories, only one honouree is allowed each year.

In the International Division, the honouree is High Chief Peter Maivia. A native of Western Samoa, Maivia was a star around the world, headlining in Oceania, Japan, England and North America. He is also the grandfather of Dwayne “The Rock” Johnson.

In the Ladies Division, it’s Leilani Kai. While most know Kai from her 1980s run in the WWF at its peak, she was a top star through the 1970s and was instrumental in training women — and still is.

In the Tag Team Division, The Black Jacks (Blackjack Lanza and Blackjack Mulligan), are the chosen ones. They terrorized the AWA and WWWF in the 1970s, usually with hated manager Bobby “The Brain” Heenan at their side.

And finally, in the all-encompassing Colleague Division, Mean Gene Okerlund is the selection. He is one of the best announcers/hosts ever, from the AWA to WWF at its peak. He continues to work for WWE, hosting shows on the WWE Network.

The ballots are sent to a select group of Professional Wrestling Hall of Famers and their peers, along with a select few historians (this writer included). Dr. Bob Bryla was the head of the selection committee this year.

Induction weekend is May 20-21, 2016, in Wichita Falls, Texas. Details will be revealed in the coming weeks.