Surf on down to Dead Wrestler Beach

Ricky Morton, the high energy heartthrob of the Rock ‘n’ Roll Express tag team was taking a beating. The Four Horsemen were scrubbing Morton’s face across the floor. The fans were outraged, the girls cried for their idol, and one five year old had a memory burned into his mind forever. The year 1986 turned out to be a big one for Eric Moneypenny. The kindergarten student was enthralled by the images of Ric Flair defacing his enemy and he understood that he should care for fan favourite Morton. 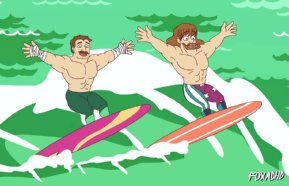 A few months later, with his father by his side, Moneypenny attended the Great American Bash, in Greensboro, to witness “The American Dream” Dusty Rhodes defeat Ric Flair for the NWA World title in a steel cage. To the young Moneypenny it was a night of magic. It was a night that the theatre of wrestling hooked him forever.

If you don’t know the name Eric Moneypenny from the wrestling world you would not be alone. Moneypenny is a comedian and writer for Animation Domination High Def (ADHD) which creates humourous cartoon shorts that are sometimes twisted but fun.

Recently, Moneypenny wrote the song “Dead Wrestler Beach” for ADHD. The title alone is a little dark once you think about all of the wrestlers that have died over the last 20 years. If you take the time to listen to the lyrics you will quickly realize that Moneypenny is a fan who loved these legends of the ring.

At a young age Moneypenny dove head first into the world of professional wrestling. Growing up in the Carolinas in the mid-1980s was a great time for the young fan. He was inundated with NWA wrestling, but because of the rise of cable television he was exposed to much more.

“Our cable & local channels not only had the big three (NWA, AWA, WWF) but we could also watch WCCW, Mid-South/UWF, Florida, Memphis, Central States, etc,” recalled Monneypenny. “I even remember watching some special Hawaii show from a football stadium with Bruiser Brody and Antonio Inoki on FNN, the old Financial News Network. Which was a crazy fit in retrospect, I don’t know why it was on a channel that did Wall Street news. It’d be like if you flipped on CNBC some random Friday night and they were showing NJPW. If it was wrestling, I was seeking it out, and watching it. The ’80s were a great entry point as a fan.”

The 1980s was a wonderful time to be a wrestling fan. With so many territories and lots of matches to choose from Monneypenny quickly found his favourites. “As a kid, I really liked Ricky Steamboat, Barry Windham, Randy Savage, Curt Hennig, Road Warriors, and I really dug the Terry Gordy-era Freebirds,” said Monneypenny. Interestingly some of his favourites appeared in his song.

“Terry Gordy is the only wrestler I’d ever got an autograph from as a little kid. My family bumped into Gordy at the Atlanta airport in ’87. I was in first grade, so I thought he was a scary ‘bad guy’ from TV, but being so young, I still blurted out ‘That’s Freebird Terry “Bamm Bamm” Gordy!'”

Gordy didn’t disappoint his young fan. As ruthless as the Freebirds were on television, Gordy was a charmer in real life. “In that big drawl, he was like, ‘I sure am!’. He stopped and was super nice, and he signed the Pro Wrestling Illustrated I’d brought to read on the plane. Always liked him after that when I was a kid, regardless of which side of the rulebook his character subscribed to.”

A lifelong fan of the mat game, Moneypenny would become more upset with each legend that died. His favourites from his childhood were mortal and were leaving him and fans everywhere too soon. The passing of Dusty Rhodes and Roddy Piper affected the writer in ways that he didn’t think possible. The emotion and pain that came from those deaths overwhelmed him.

“Two of the absolute biggest stars in history, two from my childhood that I enjoyed a great deal, and grew an even deeper appreciation after watching clips on YouTube,” recalled Moneypenny. “There have been so many wrestling deaths through the years, and as sad as many of the early deaths throughout the years have been… now we’re starting to lose our ’80s and ’90s favorites from natural causes, which is a bummer. These folks, especially from past eras of wrestling, they all put so much of themselves in their characters that as fans it seems like we all grow a connection to our memories of these folks, maybe even more so than celebrities in other fields.”

The realization that the people who had given him so much joy were now gone sparked his imagination. “I’m not gonna lie, I cried when Macho Man died. I cried when Dusty died. Cried when I heard about Piper. I wrote ‘Dead Wrestler Beach’ right after Piper. Piper’s death was so shocking, it happened seemingly out of nowhere, and I was digging his new podcast. Animated stuff takes a little bit longer, so our video still took a couple months before it came out.”

“Dead Wrestler Beach” takes place on a fun beach where wrestlers in the afterlife have a good time socializing, sun tanning, swimming and playing volleyball. It is a piece of wrestling heaven that Moneypenny wanted to create to honour the grapplers. “Well, I wanted to write a song paying tribute to all these guys, but because most of the animated stuff we do at ADHD is comedy-based, I really didn’t want ‘Dead Wrestler Beach’ to be a bummer,” said Moneypenny. “I wanted to write something that, to borrow a phrase from WWE, ‘put smiles on people’s faces,’ but hopefully still paid the proper amount of respect to these folks and how we all feel about them.”

The writer didn’t want to write a song that would bring people down or lose their smile. Rather, he wanted folks to make it a celebration. “A lot of ’50s/’60s pop music sounds upbeat, but a lot of it can be sad when you pay closer attention to the lyrics,” said Moneypenny. “I figured a beach-style song could maybe work as a contrast, because that music is super upbeat juxtaposed with the subject material. I wrote the lyrics, our composer David Schmoll came up with a very catchy track behind it, and Matthew Patrick Davis, one of our go-to singers at ADHD, did a great job on the vocals.”

Most of the wrestlers in the video would be very recognizable to mainstream WWE fans. Owen Hart, Davey Boy Smith, Mr. Perfect, Rick Rude (“He wasn’t rude; He shook my hand.”), Hawk, Big Bossman, Andre The Giant, Dusty Rhodes and Roddy Piper all make appearances. There are two wrestlers who show up in the song who might not be as well known to the modern fan as the others. Those wrestlers are Art Barr and Eddie Gilbert. Moneypenny shows his deep appreciation and knowledge of professional wrestling by just including them. His reasoning for their inclusion is also unique.

“Art Barr felt like a natural to include in a scene with Eddie Guerrero, since they were such good friends,” reflected Moneypenny. “Watching Eddie’s work as a heel in WCW and WWE, you could tell that Art Barr’s heel work was a huge influence. Having a Los Gringos Locos cameo seemed cool.”

Eddie Gilbert was that nomadic second-generation wrestler of the 1980s and ’90s that was celebrated as being a genius but, never seemed to set down roots anywhere. “And as far as Eddie Gilbert, I’ve always thought he’s never gotten enough credit in the mainstream,” said Monneypenny. “I guess he was in the WWE in the pre-Hogan era teaming with Hennig, but he never had a big run in Vince Jr.’s WWE, so he’ll probably never get a DVD, WWE Hall of Fame induction, or that kind of stuff, but he was tremendous. I first saw him in Bill Watts’ UWF and he was an amazing heel. I’m sure a lot of your readers have already seen it, but if not, look up the angle with Eddie Gilbert, The Russians, and Bill Watts. It’s so good. Then he came over to NWA, was a pretty darn effective babyface, and worked on the booking committee. His booking in Continental in 1988 was ahead of its time, and his Memphis work against Jerry Lawler was off the charts. One of the most famous NWA/WCW feuds is Flair/Steamboat, and it was Gilbert who was feuding with Flair and Barry Windham at the time, and Steamboat came in as Gilbert’s mystery tag partner on TBS, which set up the whole thing. As a kid, Eddie Gilbert always seemed like he was in the mix. He was even one of the only characters on the first WCW video game for Nintendo.” 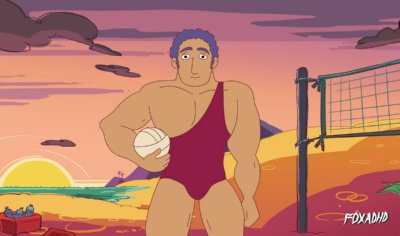 Some people might think that a song about dead wrestlers having fun at the beach might be morbid or irreverent. I disagree. The song is a touching tribute to the childhood of a passionate wrestling fan in Moneypenny. His favourites gave him joy every Saturday (6:05 p.m.!) with their amazing storytelling and in-ring athleticism that sparked the imagination of the young fan. Who wouldn’t want to hang out with their all-time favourite wrestlers at the beach no less? Yes, there is some humour and yes, sometimes it is a little silly but, overall it is a lot of fun. Watch the video and try going the rest of the day without singing the tune.

Eric Moneypenny has written a song that puts smiles on people’s faces. It is catchy and a homage to the men and women that thrilled us for years. “I’m a life-long wrestling fan, so I wanted to remember these names in some way, but hopefully in a way that they’d maybe get a kick out of it if they ever saw it. Or at the very least, hopefully they wouldn’t want to kick my ass!”