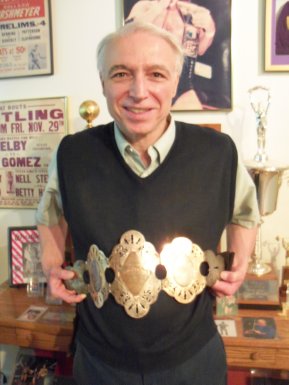 This title is traced back to 1916 when Ad Santel first claimed that title. Whether a promoter created the title or whether Santel had the belt made for himself is knowledge lost to history. However, the belt made a prominent return to the California wrestling rings in 1936 when promoter Joe Malcewicz presented it to Billy Hanson, who won it via tournament. Ad Santel worked for the Malcewicz promotion and presumably offered the belt for promotional use. The belt was retired when the Malcewicz promotion ceased activity in 1962. From 1962 until 2015, the actual belt was in “parts unknown” but, through my long contact with a member of the California branch of the Malcewicz family, I was able to place it as the most prized possession in my wrestling collection.

Approximately 15 years ago, I decided to see if I could contact any members of the California Malcewicz family. An internet search found only one Malcewicz in the California directory and his first name was Paul. I called the listed number and a man answered and I said that I wanted to speak to Paul Malcewicz. The man stated that he was Paul. I told him that I was from Utica, New York where wrestlers Joe and Frank Malcewicz were born and raised. I further stated that my father was a medical colleague of John Malcewicz, M.D., who practiced in Utica and was the wrestlers’ brother. I continued to tell him that I collected wrestling memorabilia with a special interest in Utica-related items. I talked and talked but Paul remained silent. I figured that he must think I am some kind of nut and I expected him to hang up on me so I stopped talking to see what might happen. 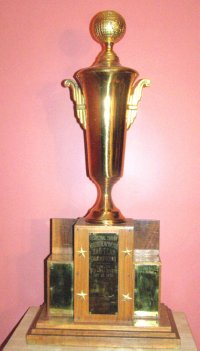 Well, he said something to the effect that he hadn’t thought about wrestling for many decades but he was happy to talk about it with me. We spent almost two hours on the phone that day. He regaled me with stories about Strangler Lewis, Dean Detton, Ad Santel and others. He knew them as friends of the family rather than as wrestling stars so his perspective was unique. Paul’s father was Frank Malcewicz, who wrestled but later became Joe’s promotional partner. Incidentally, Paul was an engineer who had graduated from the U.S. Naval Academy. Joe himself did not have any children. 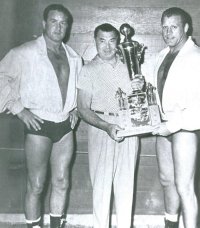 The World tag team trophy then, with Ben and Mike Sharpe, along with boxing great Jack Dempsey.

When it came time to end our conversation, Paul asked me what he could do for me. I told him that if he ever had any wrestling memorabilia to sell, please think of me as a potential buyer. He said, “I’ll do better than that. I’ll send you Joe’s personal scrapbook.” He said that the scrapbook started in Utica and it should return to Utica. I offered to pay him and he refused such an idea. True to his word, a spectacular scrapbook filled with everything from an ink blotter advertising a Boston unification world title match between Joe Malcewicz and Ed Lewis, original artwork of Joe from the Utica newspaper, clippings from the famous Malcewicz-Caddock match and more were in this priceless piece of wrestling history. 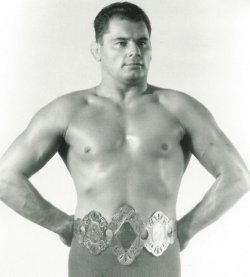 As time went on, I would periodically call Paul and we would talk about everything from politics to social issues to, of course, wrestling. One time he told me that he was going to send me a trophy that he owned and again refused any remuneration for it. Soon enough, a three-foot-tall world tag team title trophy appeared at my doorstep. That trophy was held by the Sharpe Brothers, Buddy Rogers, Leo Nomellini, Rikidozan, Bobo Brazil, the Dusek’s, the Millers, Gene Kiniski, Primo Carnera, Nick Bockwinkel (as Dick Warren) and many others. The postage alone was about one hundred dollars. I forced Paul to let me reimburse him for the postage but he refused any other money. I did my best to show my appreciation by making a donation in his name to a veteran’s group and sent him a number of gift certificates to restaurants in his area. Lou Thesz’ book Hooker mentioned that Joe Malcewicz was one of the few promoters that would pay a wrestler who showed up for a match even if the match did not take place. Apparently, the Malceiwcz’ “generosity genes” were passed on to Paul. Incidentally, the small wrestling figures on either side of the trophy are now replaced by flat metal sheets, presumably because the trophy needed to be rebuilt after Fritz Von Goering and Gene Dubuque smashed it following a loss to Johnny Barend and Ronnie Etchison in 1958 or 1959, according to records and Fritz’ recollection.

Paul once related a story about the time when Joe bought the San Francisco territory back in the mid-1930s. He said that after he bought it, the wrestling establishment tried to make his Uncle Joe actually cry “Uncle!” and abandon the territory by keeping Joe from booking the top heavyweight talent. Paul said that Joe then called his brother Frank, who was wrestling in the Midwest at that time. Frank said that he would round up some of the fast-action lighter wrestlers and bring them out to give Joe some talent to run shows. It worked out very well and the Malcewicz brothers ran an extremely successful promotion for the following 30 years.

Paul passed away in 2014. A number of months after his passing, I was contacted by the owner of the Pacific Coast Heavyweight Wrestling Champion belt. The thought of owning such a historic item that dated back a century absolutely stunned me. After negotiating a mutually acceptable price, I received the belt and brought it to a prominent local framer for encasement. The framer, who has no interest in wrestling, said that it was a beautiful museum-type piece. He pointed out to me some of the finer detailing done on the metal plates and stated that the three silver plates were real silver and that the two gold plates were at least gold-plated, if not all gold. 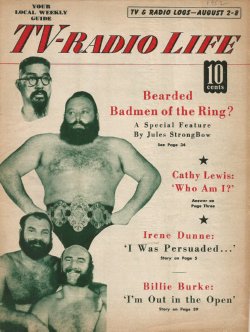 Hombre Montana on a magazine cover with the Pacific Coast belt.

Speaking of the five plates, there was a period in the belt’s use in which only the three inner plates were utilized. Later, the belt reverted to all five plates. Also, on close examination of high-quality photos, it appears that the two gold plates were switched from left to right since the wrestlers now face laterally and formerly faced centrally.

Hombre Montana appears to be the wrestler most proud to have worn this belt as photographs of him wearing it abound. He is featured with the belt on a 1950s Parkhurst trading card, an issue of a TV-Radio Life magazine and various programs. As a chiropractor, I was pleased to learn that Dr. Len Hall, a chiropractor, once held the belt, as did medical doctor, Karl Sarpolis. Another holder of personal interest to me was Gene “Magnificent Maurice” Dubuque, who attended the same Utica high school from which my daughters graduated. Of course, knowing that Joe Malcewicz also held this title and belt is of personal significance.

A full list of the wrestlers who wore this belt can be found at wrestling-titles.com. 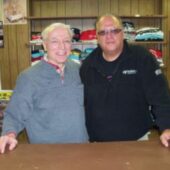 Bob Bryla, a resident of Joe Malcewicz's hometown of Utica, New York, is a retired Chiropractor and Physical Therapist who has collected wrestling memorabilia for six decades. He can be reached at [email protected]