My major complaint with comic books these days is there is far too much writing in them. This may seem to be an odd thing for someone of my profession to say, someone who believes our communication skills are in decline because we don’t read enough but let me explain. As my journalism mentor drilled into our empty little heads, if a sentence or paragraph doesn’t advance the story, cut it. You are wasting your time. You are wasting the reader’s time.

Some of today’s comic books need to be edited far better than they are. There are so many writers who seem to just love the sound of their own “voices.” Even in my favourite books, I routinely come across pages of dialogue or exposition that could have been and should have been edited down. There are so many pointless scenes, so many stories that drag on, stretched out to fill more issues. 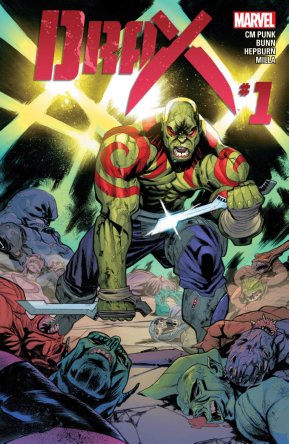 Well, you won’t have to worry about any of that with Drax #1 from Marvel Comics. Co-written by former WWE superstar CM Punk and Cullen Bunn, Drax is another in a series of solo books featuring members of the Guardians of the Galaxy. For those who may have been in the Negative Zone for the last year or so, the relaunched Guardians now includes leader Rocket Raccoon, Drax, Groot, Venom from Spider-Man, Kitty Pryde (as the new Star-Lady) from the X-Men and The Thing from the Fantastic Four. Don’t try to wrap your head around that, the writers don’t. There is little to no explanation, very little exposition. You are expected to already know the background or to just go with the flow.

Played by WWE superstar (Dave) Bautista in the feature film, the green-skinned Drax is a human being whose spirit was placed into an artificial lifeform so he could exact vengeance on the cosmic supervillain Thanos for slaying his family. You know, the very evil dude appearing at the end of The Avengers, Guardians of the Galaxy and Avengers: Age of Ultron. Played by Josh Brolin, he will be the main baddie in the upcoming Avengers: Infinity War.

In the debut issue of Drax, not much has changed. Big green and gruesome still has a mad-on for Thanos and leaves the Guardians behind to hunt him down. After the rust bucket of a spaceship Rocket Raccoon lent him crashes on an alien planet, Drax is surprised by a very powerful Fantastic Four baddie while drowning his sorrows in local bar.

While light on dialogue and descriptions, Drax is heavy on action and comedy, which is not exactly a bad thing. Very reminiscent of DC’s Lobo or Marvel’s The Thing or The Hulk during his various incarnations, Drax is portrayed as a full-throttle brawler who throws punches first and asks questions later. Artist Scott Hepburn’s exaggerated anatomy and facial expressions work really well, fitting and enhancing the tone of the character and the comic.

The portrayal of Drax himself differs from what we saw in the Guardians of the Galaxy movie. Part of Bautista’s charm was he expressed and took everything so darn literally. In Punk and Bunn’s version, he is more of a smart-mouthed heavy, again like The Hulk, The Thing or Lobo.

With what looks to be a brawl destined to tear up and smash up a lot of panels next issue, don’t expect any heady dialogue or deep character ruminations. In wrestling terms, Drax is Roman Reigns versus Brock Lesnar not Neville versus Kalisto. This is not poetry in motion. It is a Pier Six slobberknocker, plain and simple, and there is room for both types of comics on the shelves and in your collection. Even though Drax #1 was very light reading, it is a great start to what might be a fun guilty pleasure each month.