Those who know Bill Apter can vouch for the fact that few things leave him speechless. But minutes before show time in East Carondelet, Ill., the man who is synonymous with professional wrestling journalism said that was his reaction to his St. Louis Wrestling Hall of Fame induction.

“To be in a hall of fame in St. Louis, Mo., where St. Louis at one point was the holy ground of pro wrestling, is just incredible to me,” Apter said, as fans started trickling in for the Southern Illinois Championship Wrestling event, where his induction occurred October 17th. “Names like Pat O’Connor, Dory Funk Jr., Jack Brisco and now Bill Apter, alongside Gene Kiniski? I’m like, ‘Really? Wow.'” 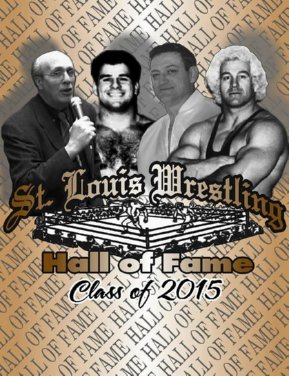 Apter said there was “legitimate shock” when SICW promoter Herb Simmons and Larry Matysik, the former Wrestling at the Chase announcer, told him about the honor.

“I covered this territory for quite a long time with the wrestling magazines, and St. Louis was always the place that did everything right,” Apter said. “(Promoter) Sam Muchnick ruled with an iron hand and that was a very good thing. And I miss the days of the heritage of St. Louis wrestling, but I appreciate that Herb Simmons and Larry Matysik have taken all these great steps to bring that back.”

Apter was inducted alongside Ed Smith, a wrestler and referee whose name has been carried on in the area by his son and grandson, as well as Ken Patera, and the late Joe Tangaro, who wrestled as Guy Brunetti. The idea to induct Apter, who was previously presented with the James C. Melby Award for his contributions to professional wrestling journalism by the National Pro Wrestling Hall of Fame in Waterloo, Iowa, came to Simmons one night at 2 a.m.

“I had actually saw a post on social media,” Simmons said during the induction ceremony, “and I think Bill had a bad day and he was kind of venting about how people in his profession had been overlooked, not really being recognized in the great work they have done for many, many years… The next morning I called Larry Matysik. I got a hold of Tony Costa, who sits on the board of directors, and said, ‘Bill Apter has to go into the St. Louis Wrestling Hall of Fame.'”

Apter, the first journalist to be inducted into the hall of fame that was created in 2007, began covering the St. Louis territory in 1973. The coverage, according to Apter, made sure people worldwide knew “about the special place that St. Louis wrestling had in the business.”

“In New York, you have Madison Square Garden and that was the showplace of pro wrestling. St. Louis, as I mentioned, was the holy ground of pro wrestling,” Apter said. “So if you wanted to get anywhere in pro wrestling back then, you had to have wrestled in St. Louis.”

While some journalists struggle to develop relationships in the communities they cover, Apter said he has maintained and built rapport within the wrestling industry.

“It was bribery at first, where I take pictures of some of the wrestlers and the next time I went to a show I had copies… I was known as ‘Good Bill,'” Apter said.

But he also said he learned that when people spoke about issues they didn’t want him to know about, he walked away.

Apter, who has never known another genre of journalism other than professional wrestling, said he bought radio time in New York in the late 1960s and early ’70s because he wanted to be a broadcaster and announcer.

“I got some tickets to a wrestling show, went backstage, interviewed some of the wrestlers and I took some pictures with an old film camera… and I sent them in to one of the wrestling magazines that I read and that put the key in the ignition,” Apter said. 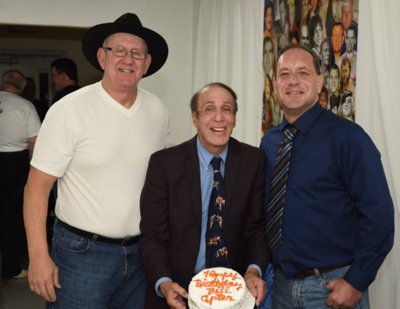 From there, the man who initially wanted to be a wrestler himself but his parents wouldn’t allow it, started writing regularly.

“My first few stories were terrible and the publisher would tear them up, and he said, ‘You’re trying to be a writer and the problem with that is we can’t hear your voice. I want you to write the way you speak,'” Apter recalled, “and from then on everything — Now, I might not have been the best grammatically, or putting the commas in the right place, but when people get my book ‘Is Wrestling Fixed? I Didn’t Know it was Broken,’ the one thing that they all say to me is, ‘I can hear your voice when I read your book.'”

That book, Apter’s first, has been roughly a decade in the making. After the England-based wrestling magazine (Total Wrestling) Apter had been writing for was discontinued in 2004, he said he was without a wrestling product for the first time. Around that time, Apter received a call from Michael Holmes, of ECW Press, offering him a book deal. Apter OK’d the deal but it wasn’t until 2012, after SLAM! Wrestling Producer Greg Oliver poked and prodded him, that he began the writing process.

“I signed the contract in 2012. I procrastinated until about a year and a half ago when my wife said, ‘You promised him you’re going to do this, and you’re a good person on deadlines.’ And I just it was a huge task of me to remember what I did back in the ’70s. So thank God for Google.”

And even after a half century in the business, Apter said all that has changed is the “window dressing.”

“When people ask me today, ‘After 50 years in this business, how do you keep watching because of what, quote, it is today?’ And what I tell them is that the window dressing is totally different, but when guys get in the ring — even in WWE or TNA — when the guys get in the ring, they’re working as hard as the guys did back in the ’70s.”

Having seen the wrestling industry itself evolve, he too evolved in how he presented his work to the public. Apter said he was the first person to put wrestling video interviews online. Doing so added legitimacy to his body of work, and he continues to do so with his current project, 1wrestling.com.

“I was the first guy to ever implement Skype video interviews on a website, and I still do it,” Apter said. “So I’m still pioneering, and I’ll never retire, ever. I never want to retire. I do this and during the day for the past nine years, I work for a nonprofit called AHEDD, and the company’s mission is to help people with intellectual and physical disabilities to find competitive employment, and I’m a job coach and I love it.”