MONTREAL – Just four months after his WWE debut, laying out John Cena, Kevin Owens will get to wrestle in front of his hometown crowd in Montreal, including his wife, kids, family and friends. Tonight, Kevin Owens is coming back home.

When he signed with the WWE in August of 2014 and was assigned to the NXT developmental territory in Orlando, Florida, Owens didn’t think in his wildest dreams that time would go by that fast and he’d be so prominently featured on the main roster. 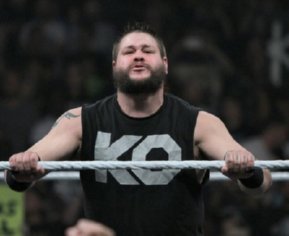 Kevin Owens in the main event at NXT in Brooklyn the night before SummerSlam. Photos by Bruno Silveira

As much as the powers that be in WWE had something to do with his rise to prominence, Owens wants to publicly thank another power – his wife.

“I asked if I could come back to Montreal,” Owens told SLAM! Wrestling. “My wife is so strong and gives all she got so I can have the career that I have. Without her support it would not be possible. Therefore, staying in Florida wasn’t an option. When I’m gone five days a week on the road, my wife needs some help, she can’t be in Florida alone with two young kids. She needs to have her family and my family nearby to give a hand sometimes. So going back to Montreal was essential. I also want my kids to know their grandparents, that’s important for us. The success I have in the WWE is due to my wife as much as anybody else, because without her, I wouldn’t be here today.”

The world of a professional wrestler is something really special that few can actually understand.

“I knew the schedule was going to be tough, but I don’t know how well wrestling fans know how hard it can be, how busy we can be with the travelling, wrestling four or five days a week. That being said, I wouldn’t change it one bit. It’s part of the job, ” said the 31-year old Owens (real name Kevin Steen).

Even with a tough schedule, there is always part of the job that seems unreal, especially after only a few months in the WWE.

“I still have an appreciation for where I am right now,” said Owens. “Last week, before Raw, I was sitting with Big Show and Steve Austin and we were just talking. I wasn’t just a fan listening to what the wrestlers had to say, I was part of the gang. We were talking about the business and it was just a treat for me because they were two guys I grew up watching on TV. I’m getting used to the schedule, but I haven’t lost that spark.”

On his first night on the job, he attacked John Cena and started a feud that lasted three months. Some were critical of that, saying that he could only go down from there, since he started at the very top. But for Owens, he can’t see any negative about it.

“It definitely helped me working with Cena and anybody who thinks the opposite is delusional. When you worked with him on Raw and on PPV, how this can be bad? Whatever people said about me losing two matches out of three, at the end of the year, fans will remember the quality of the matches and how great these matches were way more than who won and who lost.” 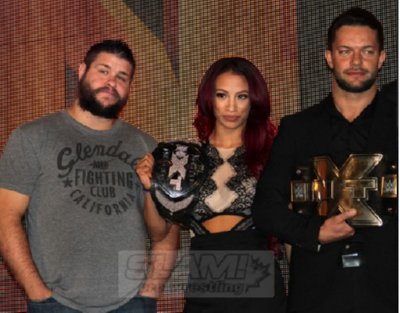 Just last month, Owens debuted at SummerSlam, beating Cesaro. But the night before, he main evented the same venue, the Barclays Centre in Brooklyn, against Finn Balor for the NXT title in front of a sold-out crowd.

It was an experience he will never forget for many reasons.

“It was a special week for me. First, we were in New York City all week, so I had the chance to bring my wife and my kids. My parents came as well, so it was fun to be able to share that week-end with all of them.”

In particular, Owens remembered being in the same building not too long ago, a story that also involves this writer.

“I remember that I went to see a WWE PPV at Barclays Centre, TLC, in December 2012 and that you were sitting with me, in the rafters of the arena and three years later, here I was, main-eventing a show in the same venue. Seth Rollins was the one who got us tickets since he was making his in-ring PPV debut for the company and at one point you saw that I was getting a little emotional and you told me, ‘One day, you will be the one giving me tickets.’ And sure enough, three years later, I gave you ringside tickets for the NXT show in Brooklyn. I will always remember that. So for all this, this weekend will always be special.”

“I might be back for one match or for an appearance, but with the schedule I have on the main roster, it will be tough. Working full time there is definitely over. I want to put my efforts on my WWE career now and as much as I liked NXT and that it’s a fantastic place to perform, it’s time for another chapter in my career. The NXT chapter was short, but I had some real special moments and will keep some very good memories as well.”

Tonight, Owens will wrestle in Montreal for the first time since he started with the WWE, though he has wrestled in the Bell Centre (when it was named the Molson Centre) before on Jacques Rougeau-promoted shows. Trying to hide his true emotions, he tries to keep his head level in his preparation for his big night.

“I can’t wait. It will be a cool night. Just for the fact that my parents will come and see me wrestle at Bell Centre after bringing me there so many times when I was just a kid. It will be extra special to work in my hometown, but at the same time, I approach this show with the same attitude I have for any other show, which is to give the best performance possible and to give the crowd a good run for their money.”

At the show, fans will be able to buy another new Kevin Owens’ t-shirt, this time with his KO logo in the colours of the Montreal Canadiens. And Owens had a lot to do with it. It’s prominently featured at the WWE Shop. 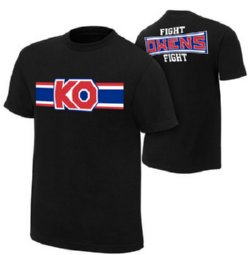 The new Kevin Owens t-shirt, inspired by the Montreal Canadiens.

“It was my idea to begin with. We had talks about having a new t-shirt and I came up with this one. The guys running the merchandise were all fine with it because they knew that it would sell. We worked together on the design and I’m very happy with the result. I’m mostly happy to see that these guys are trusting me enough, have enough trust in my abilities to know it will sell and be a hit with the fans.”

He was unable to resist a little zinger, though.

“Sami Zayn didn’t have a t-shirt done for him when he came to Montreal, while I’m having one done especially for the occasion. That proves that I’m better than Sami Zayn!”

Being on TV every week, making more and more media appearances in Montreal, Owens is getting recognized now more than ever in his own town, and elsewhere as a matter of fact. And sometimes celebrity is tough to handle.

“I’m still the same person I always was, but yes, there’s not a day where I don’t get recognized, either at the grocery store, a restaurant or at the movies. Usually, people are very respectful, especially here in Montreal. In the United States, it can be different sometimes. For example, the other night, it’s three in the morning when I finally get to the hotel. I have my son half asleep in my arms and there were about 25 people waiting in the hotel lobby for us to sign stuff for them. I told them that I couldn’t because my son was so tired he was about to pass out and they didn’t understand that and I heard them make comments about it. To me, when I’m on the road, the hotel is the equivalent of my home. So when there are people waiting for me there, it’s pretty much like if they were waiting for me right next to my front door at my house. So I find that a little impolite. But you know, it’s also part of the job. In most cases, I have no problem and everything goes well. ”

In closing, Owens had a message to the Montreal and province of Quebec fans.

“I’ve been waiting for this moment, to wrestle at the Bell Centre for the WWE, for so long, that I hope you, the fans, will have as much anticipation and as much eagerness as I do. I’m sure it will be a night to remember and I’m happy to be able to share it with my wife, my parents, my friends and all the great wrestling fans from Quebec. I really wish to see you all coming to the Bell Centre tonight, fill the venue up and have a one heck of a night together!”

The WWE live event from Montreal is tonight, at the Bell Centre.