Headlock on Hunger has some big name supporters

As the 2015 recipient of the Frank Gotch Award, the former Glamazon Beth Phoenix has focused her career on being the best version of herself, which led to three WWE women’s championship reigns and, ultimately, to her current work with Headlock on Hunger.

Phoenix said while others who have received the award that recognizes philanthropic work outside the ring “have done incredible things in the world,” she feels as though she’s just starting to scratch the surface. 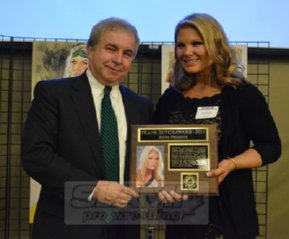 “I hope that I can make everybody proud,” Phoenix said, “and make them feel like they made a good choice in choosing me to receive this honor.”

Phoenix said at the George Tragos/Lou Thesz Pro Wrestling Hall of Fame induction ceremony in mid-July that she partnered with Eblen Charities’ Headlock on Hunger organization, spearheaded by Bill Murdock, because her daughter, Lyric, “means so much.” She joins many other wrestlers who have taken up the fight against childhood hunger, which affects one out of five children.

“No child should ever feel empty. No child should ever have to be fearful of what tomorrow (will bring),” Phoenix said. “Eblen Charities, under the guidance of its unsung hero Bill Murdock, has begun organizing an army to head to the frontlines of this battle.”

Ross, who emceed the induction ceremony in Waterloo, and has become a national spokesman for Headlock on Hunger, said Murdock “does more good-hearted charitable work” than anyone else he has met.

Brian Blair, the 2015 recipient of the Lou Thesz Award and supporter of Headlock on Hunger, said during his induction speech that his family life reminds him of the organization’s cause, though his situation wasn’t as dire. After his parents divorced, he said the family started buying “powdered eggs and powdered milk and all this stuff that I didn’t like to eat.”

“It just was really bad,” Blair said, “but my mom didn’t really say much when I kept asking her, ‘When are we gonna have some chicken or some hamburger or some beef or some meat?'”

Then one day during fifth grade, Blair said, his mom gave him the necessary coupons and let him buy groceries. While at the register, some sixth-graders approached him.

“(I had the) cash register lady asking me for money at the same time, and I didn’t want to bring the coupons out, but I did,” Blair said, “and anyway, handed them to her and she handed me the voucher back like my mom told me that she would and I heard this heckling from the audience in the line.”

Jerry Brisco, who also works with the organization and introduced Blair during the induction, said the issue of childhood hunger is “near and dear to every one of us.” 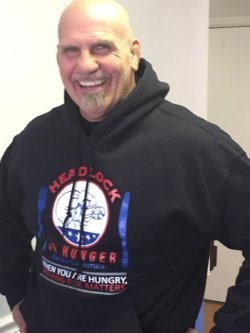 But the children around the nation going hungry have no choice.

“They have no funds, no means to get food,” Brisco said. “And it’s up to each and every one of us to provide for those means and those funds … (Headlock on Hunger is) an organization that’s near and dear to me, and I’ll give my last breath to the organization.”

The non-profit, based in Asheville, N.C., collects “food and cash donations during the wrestling season at meets (and) tournaments,” along with creating social media campaigns to further its cause, according to its website.

For more information on Headlock on Hunger, visit headlockonhunger.net.