There’s a certain arrogance that exists in The WWE Attitude Era. It’s the very premise that you should already know the back story, so there is no need to share details in the book. 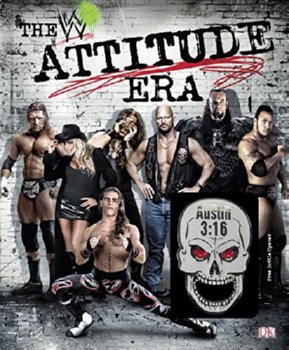 Those in the know are aware that Triple H is referring to the infamous “curtain call” where Triple H, along with Shawn Michaels and 1-2-3 Kid Sean Waltman broke kayfabe to say goodbye to the departing Kevin Nash and Scott Hall in the centre of the ring at New York City’s Madison Square Garden.

Yet nowhere in the section is it explained WHO “Kevin,” “Scott” or “Kid” are.

As much as I might want to target the author for this oversight, his name (Jon Robinson) doesn’t even appear on the cover or spine of The WWE Attitude Era, only on the back cover, small, bottom right, which leads me to believe WWE thinks that writers are not important. Assuming the book was edited by a non-fan, which would be logical, then shouldn’t some of these arrogant presumptions have been questioned, addressed and clarified?

In a similar vein, how about the photos and the lack of cutlines? In typical WWE style, the book is chock-full of great images, some rare, some key to history. But if you don’t know your stuff, you’re outta luck on learning much from the pics.

There’s a beauty of a photo of Steve Austin, pre-Stone Cold (with short hair) beside someone who isn’t identified. I know it’s the Million Dollar Man Ted DiBiase, and that it’s the Million Dollar title belt on Austin’s shoulder, but if someone gets this book in 10 years, where’s the value to that photo? DiBiase isn’t even mentioned in the narrative.Or in the “Attitude’s Unsung Heroes” section, there are two different photos of Kaientai, but never are they identified by name.

By far my favourite part of the book is the section “Attitude’s Defining Moments: A Timeline,” where a number of dates and events are listed from the Attitude Era, which runs essentially from June 1996 (“Austin 3:16 says I just whipped your ass”) to WrestleMania X-7 in April 2001. Again, if you lived through the era, as I did, the photos and brief descriptions will bring a big smile to your face and memories racing through your mind … and probably heading to the WWE Network or your DVD collection to relive a few of the events.

In another 10 years, a book like this will come with a sound implant of some sort, where you can click on the catchphrases themselves and hear them out loud, rather than just in your head, or with videos built-in.

But if you are too young for the Attitude Era, a John Cena-era WWE devotee for example, it’s almost useless. On February 24, 1997, ECW invaded Raw, and ECW honcho Paul Heyman is quoted. The accompanying photos have Tommy Dreamer and D-Von Dudley in a stare down, and someone who even I don’t recognize in another. Naturally, no one thought to ID the photos.

The other issue, which relates to some of the things already mentioned, is that the layout of the text itself is sometimes hard to follow, jumping through countless sidebars, changing width, wrapping around photos.

Given all this, I seriously question the editorial direction of WWE Books, or at least its attempt at books like this.Robinson’s writing itself is fine, and he got access to all the key names for interviews — The Rock, Stone Cold Steve Austin, Vince McMahon, Mick Foley, Triple H — as well as a number of secondary subjects, like Trish Stratus, Lita, Shawn Michaels, Kane, Mike Tyson, and more.

Some of the more sensitive or bizarre elements are covered, like the Katie Vick necrophilia incident, Mae Young giving birth to a hand, and Val Venis almost getting his member chopped off.

Missing? The Undertaker only has a couple of lines where he’s interviewed; Vince Russo is mentioned (and skewered), though his writing partner, Ed Ferrara, is not; we don’t hear from so many memorable characters like Val Venis, The Godfather, or Chyna. Where was Sable? Geez, she’s married to Brock Lesnar, so getting her to do an interview should have been possible.

In the end, most of what the people interviewed had to say has been said elsewhere and often.

And some of it is just wrong. I love Trish Stratus, and have known her a very long time, but the comment, “Before us, the Diva’s skill set was a little girly. It was almost like play wrestling,” makes me cringe. There were many great women wrestlers before the Attitude Era.

In an attempt to marry the past to today, current WWE stars are allowed a little bit of commentary on what they loved about The Attitude Era too, including a surprising line from CM Punk, who we all thought was persona non grata in WWE-land.

Again, for those familiar with history, it’s pretty easy to recognize some of WWE’s revisionist history — the victors do, of course, write the history books.It’s Ted Turner that plotted every second of WCW’s fight against WWE, apparently. Triple H and Chyna were never in a real-life relationship. Poor Test (Andrew Martin) is even written out of the wedding storyline where he was supposed to marry Stephanie McMahon, and Triple H had taken her to Vegas ahead of time.

The one that had me chuckling the most was the idea that John Cena was immediately the anointed one after the Attitude Era ended. “With the Attitude Era now over, it was time to reignite the brand and introduce a set of new stars and personas,” writes Robinson. “To do this, Vince McMahon stood up in the WWE locker room and asked who was ready to lead the next generation. Ruthless Aggression was about to begin, and McMahon tabbed John Cena as the man to lead his company into this new era.” (Cena debuted on the main roster June 27, 2002, and even then wasn’t a sure thing, more than a year after the Attitude Era came to a close.)

The WWE Attitude Era book is for those who lived through the Attitude Era. If you didn’t, steer clear.