Mat Matters: Kevin Owens has made me a fan again

What do you like about wrestling? I know what I like. Over the years I have had the privilege of watching a lot of the sport on TV and in person. It started with the WWF, then AWA, NWA, Stampede, Grand Prix from Montreal, Vancouver All-Star Wrestling, WCW, and TNA.

I was always amazed by the stories. One combatant has a problem with another combatant. There was a reason for the beef. The interviews on Maple Leaf Wrestling furthered the story for me. I could hear the wrestlers tell me why they had a problem with the other guy. The pieces to the puzzle fit together. 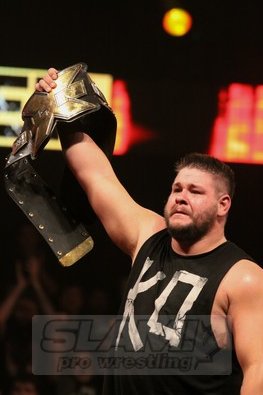 Some of those stories have stuck with me. They made me buy into the characters and to form a definite opinion about each grappler. I wanted to learn more. I questioned moral norms. Where would the story take them? Here are a few of my favourites.

“Stone Cold” Steve Austin hooked us in by doing what we all have wanted to do at some point, knock out the evil boss. Roddy Piper drew us in as he raged against the hypocrisy of Hulk Hogan’s squeaky clean image and Mr. T’s tough guy antics when he was just a TV actor. You could feel his angst at being overlooked because Hogan had the look and Mr. T was invading his realm.

Who couldn’t understand the actions of Randy Savage when he brought the ring bell on Ricky Steamboats throat? Take out the competition just like corporate America would. Larry Zbyszko turned on his mentor Bruno Samartino. He felt that he had to defeat his friend in order to prove he could make it on his own and made us question the worth of friendship.

Over the last few years the WWE has changed its demographic focus from 18 to 30 year olds of the Attitude Era, to the youth and family audience of the current product. For a fan like me, who discovered wrestling just before the first WrestleMania and continued avidly watching the sport through the Attitude Era, I have often been disappointed with the storylines of the current product.

This is why Kevin Owens is so important to wrestling today. His story, through NXT and on the WWE Raw and Smackdown shows, connect to an older crowd because we can believe in him. Kevin Owens’ goal is to be the best so he can provide for his family. Anyone in my demographic who has kids understands his thinking. Do whatever you have to in order to feed your family. In real life, people step on their friends at work in order to get a raise. They push themselves harder and longer, working two jobs so their kids can have clothes and shelter.

I can’t be the only one who feels this way. There must be other folks in their forties who want to like wrestling, but can’t stomach the poorly conceived plots that don’t have a basis in reality, where the combatants should at least have a personal issue at stake.

Owens is that guy. We can see ourselves in his actions. We understand his desperate way of thinking. He looks like the guy down the street. He is not a perfect specimen. He has the same flaws we have. More importantly, on the wrestling side of things, a great heel can truly justify their actions. Kevin Owens justifies his actions.

Kevin Owens made a splash on NXT when he injured then-champion and best friend Sami Zayn. For years the two traveled the world together plying their trade. When Owens finally had the chance to step into the WWE universe he took it. He has a young family to look after and he knew his career needed to make an impact. So, he injured a man closer than a brother to him and took his championship in order to provide a better life for his family.

During interviews Owens becomes testy when questioned about his ethics. Michael Cole seems to push the right buttons. Owens just refers back to his family.

John Cena has been the main headliner for the WWE for a decade and Owens went out and beat him in their first encounter. What made the match so interesting is afterwards, Cena gave Owens his stamp of approval for being such a tough competitor. Owens saw this as mockery. He didn’t need the stamp of approval. He needed to win, period. He needed to win to help his family. He had to keep plowing through the competition.

My friends and I have been pulled back into the WWE shows by the story Owens is telling each week. Over the last decade I can think of a few stories that pulled us back in because they were based in reality and filled with personal issues. Sadly, there have not been enough of these stories to hold our attention.

Bret Hart returning to take on Vince McMahon at WrestleMania is a great example of personal issues selling the program. Hart wanted revenge on his evil former employer and he gets it. The common man could relate to that.

Daniel Bryan clawing his way to the main event and the WWE championship at WrestleMania was a compelling storyline. Everyone can think of a time when someone has said “No” to them and have been made to feel inferior. Bryan’s resolve and positive attitude resonated with the audience because the people could see themselves in the struggle of the grappler.

The Nexus terrorizing the WWE captured the imagination of WWE fans because they could understand the frustration of the rookies and how they hungered to grab the brass ring. The young wrestlers used every dirty trick in the book and turned the WWE on its head in order to get noticed and respected. People could understand that. It also allowed for the good guys to fight an uphill battle against an army of bad guys.

Kevin Owens is making WWE wrestling fun to watch. He is talented. He is outspoken. He is real. He is one of us. Owens connects to the people because he can justify his actions as being pure and right and that makes him captivating. I hope the WWE can see that as well.

Caleb Smith is a father of three, as if you couldn’t tell.