The dream to win Tough Enough is over for Chelsea Green.

The British Columbia native trained by Lance Storm was nominated by The Miz, who held her to “a higher standard” because of her background. Miz originally selected Amanda but changed his mind when the final vote was called. 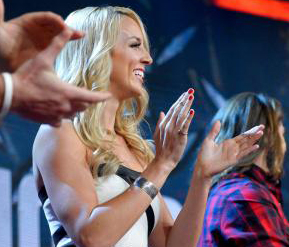 Chelsea Green has been voted out. Photo Courtesy: WWE.

”I don’t know if anything went wrong. Maybe this is my fate and I have to keep trying,” Chelsea told Renee Young. “You can put whatever roadblock in front of me. It is not going to stop me.”

Like Miz’s decision to save Amanda last week. Paige’s save of Giorgia this week paved the way for Chelsea’s exit. If she hadn’t been pulled off the block by Paige, Giorgia would have been the one sent home.

Chelsea was criticized for showing off and not being a team player during the in-ring challenge.

”I am not a fan of Amanda, in any sense of the word, but it is about team work and if you and I were in the ring together, I know I am better than you so I would come down to your level and bring you up. That is what teamwork is,” criticized Paige.

Chelsea insisted she was not trying to overshadow or intentionally make Amanda look bad in any way. She was just doing what she was taught, what came naturally to her. Chelsea joined Tough Enough three weeks into the competition replacing Dianna, who left the show.

Second-rate but popular contestants Sara Lee and Zamariah “ZZ” Loupe continued to noticeably bring up the rear and even though the judges ruthlessly ripped into him, ZZ escaped the bottom three this week. 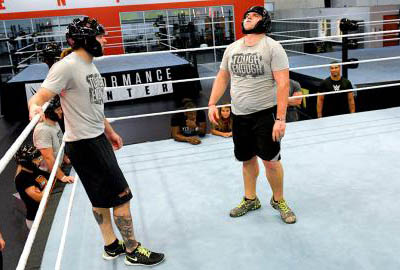 ZZ fails to impress the judges in the ring. Photo Courtesy: WWE.

ZZ was once again blasted for not being in prime condition and not working hard enough to get in better shape since joining the series.

”I am watching you in the gym and I am watching ZZ in the gym. You are sweating. You are out of breath. You seem, very, very focused. Then, there is ZZ who doesn’t have an ounce of sweat, is not out of breath at all. Is he (ZZ) just working out for the cameras,” Miz asked Josh, who has been encouraging ZZ throughout the process.

”Yeah, man. I think he really is because that’s my church, that’s my domain,” answered Josh, who has lost 35 pound since Tough Enough began. “When I see someone disrespecting something I flourish in, it makes me heated.”

”I know I started late but I really wasn’t aware of the type of physicality the WWE needed. Now that I know, I am here and I am playing,” ZZ bellyached.

Lame excuse, ZZ. How could anyone not understand how physical the world of professional wrestling can be? It is about time the WWE Universe, the judges and the producers stopped cutting this whinger slack, honour the hard work and dedication on display by the performers in the WWE and hand ZZ a one-way ticket back home.

While ZZ did step it up in a fire fighting challenge hosted by the Orange County Fire Rescue Department and The Prime Time Players, he was on a team consisting of four contestants while the other only had three. During the in-ring challenge, he was left once again gasping for air after only 90 seconds of work. 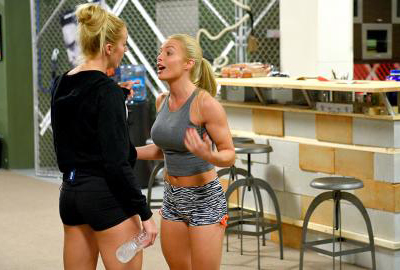 ”No,” spat ZZ crawling on the mat.

”Get out of my ring! Get out,” shouted Gunn.

Sara fared just as badly. Giorgia accused her of almost dropping her on her head during a slam.

”How does she not know how to do a simple slam? I could have really gotten hurt. She didn’t even say sorry,” said an irate Giorgia.

”The reason all of us were a little silent at first it is that the few things that were kinda bad, were also dangerous and it scared us,” said coach Lita recognizing what happened in the ring.

”Sara pretty much nearly paralyzed me and she has no clue she has done anything wrong,” said Giorgia.

”Maybe my slam wasn’t the neatest but I still did it and picked her up and put her down. I think GG is being kind of a brat,” said Sara in response.

When the situation was discussed by the judges, Daniel Bryan, who is currently recovering from a severe ring injury, defended Sara and ridiculed Paige for terming the mistake as “scary”.

”There are a lot scarier things than getting slammed on your side. There just is and over-reacting like that to me is just bad. If that is going to make you that worried about being paralyzed then you probably don’t belong here,” said Bryan nominating Giorgia.

Paige termed the move as “somewhat dangerous” and tore into Sara for not apologizing to Giorgia in the first place.

”You didn’t show any kind of compassion. What kind of person are you,” asked Paige, who thankfully took a step back and toned down her input on the show this week. She and the episode itself came off as more focused and polished without the constant random comments and insults.

After being berated by Paige, Sara did recognize her mistake and apologized to Giorgia. 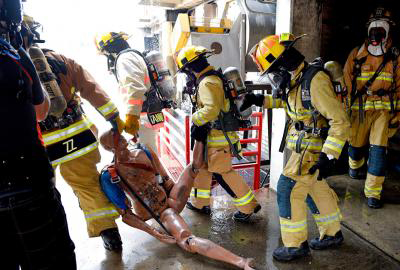