Piper’s legacy through the voices from the past

Social media is all well and good for the people who are still around to be able to react and comment on a sudden passing of a colleague, like Roddy Piper. But voices from the past offer interesting insight. For a little more perspective on Hot Rod, here are some thoughts from those who went to the Great Ring in the Sky before he did, like Garibaldi, Scott, Bastien and Tomko 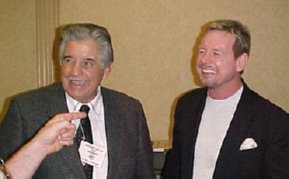 Leo Garibaldi and Roddy Piper at a Cauliflower Alley Club reunion in 2001. Photo by Greg Oliver

AL TOMKO, early trainer and promoter in Winnipeg: “He started off with us. I had a television production company at the time. He was sort of a local wrestler, he was into boxing before he was into wrestling. … A neighborhood kid. We took him and trained him. Then I’d let him use the television so he’d learn to talk. We had a circuit around Manitoba to train these guys, we’d do the small towns so they would learn how to wrestle before they hit the big time.”

THE BEAST YVON CORMIER, legend in the Canadian Maritimes: “I don’t think that I called him a geek, but he was a little small. But after I got done with him, trained him and he gained weight, I knew he had the heart and desire to be good.”

BOB GEIGEL, promoter in Kansas City: “Bob Brown came down one day and said, ‘There’s a kid up in Winnipeg who is going to be a hell of a performer. I think you can use him and make some money with him.’ It was Roddy Piper. … He made up for his size with his brain.”

LEO GARIBALDI, wrestler and booker: “Roddy Piper, he’s great. I was the booker in Los Angeles. I was out of wrestlers. … Then I heard him talking to somebody, and he was asking how it was. He was just starting. So I booked him in a match, and I just gave him to somebody to eat him up. But the guy would not be eaten up. He was playing the bagpipes, he was jumping around and flashing his skirt. The people went crazy. They didn’t know to hate him or to love him because he is a loving guy, a great guy, and he’s doing what it takes. … Roddy became my first big star”

RED BASTIEN, wrestler and booker: “He was good on the microphone and good in the ring. I was best man at his wedding. I was up in Portland, Ore. and I saw him up there. I was booking for Fritz Von Erich down in Texas and he called me on the phone. He wanted a spot to come and I said, ‘You’re booked.’ I didn’t tell him one of the guys who came to replace somebody who left got hurt. His timing was perfect, I didn’t tell him that. That was where he got his start, then he went to LA and that was his first hit there. He never had to look back.”

IN THE PACIFIC NORTHWEST

DUTCH SAVAGE, Pacific Northwest wrestling legend: “Roddy was just boxoffice. Gift of gab, work circles around you, constant dynamo. … When Piper came in from L.A., he worked like a Mexican. We had to calm him down, show him how to work.”

MATT BORNE, a.k.a. Doink the Clown: “When I started, Roddy Piper just came in the Portland area and we became friends, and kind of took me under his wing. A lot guys, the oldtimers back then, they’d see a second-generation wrestler come in, they’d automatically think ‘here’s another guy that wants it on a silver platter’ — which I never did, but I had a lot of negative things that I had to deal with …” before being accepted.

PLAYBOY BUDDY ROSE: “He was a great bad guy everywhere, but he was always a babyface in Portland. … Even after WrestleMania, when he came back to wrestle in the Coliseum, he thought he was going to be the heel because of his national exposure, what he did to Lauper and all the shit. I said, ‘No, I did the promo on Saturday night.’ We’re on the phone on Tuesday, and his wife, Kitty, is about to have a baby. He said, ‘I think I’m going to be the heel when I come out.’ I said, ‘No you’re not. There’s 12,000 people at the Coliseum, and you’re going to be cheered because they popped when they heard it’s going to be me and you.’ … it was another friendly bet. He said, ‘The only thing is, I’m not going to be able to make the shot if my wife is having the kid. I’ve got to leave.’ … I went out to the ring first and got booed. I didn’t have to do anything to get booed. I was just the heel. He came out and they gave him a standing ovation. He came out with that heel Roddy walk, and everything going. He stopped and looked at the people, shook his head, and did the jumping up and down on one leg like he did as a babyface when he was in Portland. … He learned something that night, and so did I — it didn’t matter what you did anywhere else in the country, if your home was Portland, Oregon, and people knew you lived in Portland, you were their babyface.”

“I think he’s one of the greatest talkers ever in the history of wrestling because he never did the same interview twice.”

GEORGE SCOTT, wrestler turned booker in Charlotte and WWF: “I got in a fight with him one time. I brought him into the Carolinas. I saw him in Oregon and he was playing the pipes. I was doing the booking in the Carolinas. I brought him in and I said, ‘When you walk out before your match, I want you to play the pipes and around the ring.’ It was ungodly real. Our ratings went up in three months something like 30 per cent, and it was from him playing the pipes and stuff like that. He got over like that. Then after when I quit there for Crockett, my son and him were out, and I had given my son my old Cadillac. He jumped on the hood and banged the whole thing up. I said, ‘Roddy, you need to fix it.’ But him and I got to be real close friends. So finally he paid, I think it was $600, $700 to fix it up. Then I went for Vince [McMahon]. Vince had me going around, so I meet Piper. Him and I went out and ate one night. I brought the thing up, and him and I got into it, and I beat the hell out of him. (laughs) But we got to be very close friends after. I was just lucky I guess. I think he had too much booze that night.

“Last time I saw him, he came and hugged me and kissed me, because he was at a convention thing. He said, ‘I love you, believe me. If it wasn’t for you, I’d be nowhere.’ I appreciated that.”