The Timeline of WCW in 1989 by Kayfabe Commentaries has been on my list of things to see for a while now. Jim Cornette is always entertaining but in 1989 as he was on the booking committee most of the year. Therefore, who can talk about that year and be more entertaining?

Jim Cornette brings you right inside what that year was like. He does it with all of his notes, contracts and booking sheets. He back up his story with hard facts. 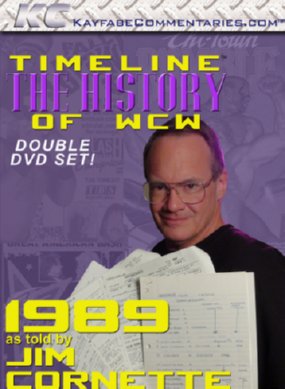 1989 was the first year under Turner Broadcasting and the last great year the company would have until Hulk Hogan and the NWO. That’s the year Ric Flair and Ricky Steamboat had that incredible series of three featured matches. “Flair and Steamboat were at their physical prime,” Cornette said.

That’s also the year the Ric Flair vs Terry Funk match on the Clash of Champions in New York drew a 4.0 rating with Ric Flair as the booker. Flair had taken over from George Scott, who had replaced Dusty Rhodes after interim booker David Crockett had screwed up the Midnight Express vs. Midnight Express feud. Pissing off the the star is the theme of this DVD.

Apparently, Crockett had agreed to keep everything going, but he didn’t like Randy Rose and took him out of the equation. That pissed off his partner Dennis Condrey who went home for good to take care of his horses. This left the Midnight Express of Stan Lane and Bobby Eaton, with manager Jim Cornette without opponent for the second time in a row. At the end of 1988, Tully Blanchard and Arn Anderson jumped to the WWF had left the Midnights in the exact same situation.

New booker George Scott didn’t know what to do with them, one of the best drawing tag teams in the business and he had nothing for them.

1989 is also the year where Turner executive Jim Herd took over wrestling operation. Herd has been a favorite victim of Cornette for year and this time he puts all the nails in the coffin.

He explains how exactly Herd killed the return of Tully Blanchard at the end of the year while also rescinding on the offer made to Arn Anderson, making his word worthless to all of the wrestlers.

The best story is Cornette fighting to get a contract for Eaton and Lane while Herd kept giving Cornette more but never offering enough for his wrestlers. “I guess Herd never knew loyalty,” Cornette surmised.

Cornette knows the subject so much that he sometimes answers questions of the host Sean Oliver before being asked. That doesn’t take away from this release as they even cover the early part of 1990 because of that. That makes the release a little over three hours and maybe a little long. Still, just watch it in two or three sittings. It’s worth it.

Even if I knew a lot, I still learned plenty about that year and this is money well invested if you want to learn about wrestling history. Not just about Cornette and the Midnight Express but on the early career of Shane Douglas and Mick Foley as well.

As far as I’m concerned, 1989 was the twilight year of what was Jim Crockett Promotions / WCW and you can see both its greatness and shades of thing to come. It was a fun year but it’s also a sad year — thank God Jim Cornette can make it sound like a great time.