Springer’s ‘Too Hot for TV’ not even lukewarm

Too Hot for TV is really just a cold shower.

The WWE’s latest attempt at creating “original content” for its Network is unfortunately just another example of the company repackaging footage we have all seen before and weren’t really looking to experience again.

In the 1990s, tabloid talk show host Jerry Springer released his Too Hot for TV DVD and video tape collection which presented uncut racy or naughty segments that had to be cut from his show due to broadcasting standards. The collection featured all sorts of nudity, violence and swearing that didn’t air on television. 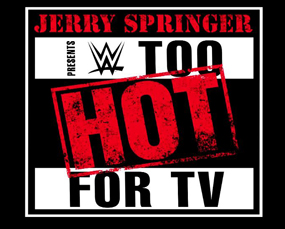 Calm down, Sparky. Calm down. That is not what the WWE is doing here. Not even close.

In the first episode “Love Hurts,” there’s no uncut footage nor is there any censored material being aired for the very first time. You have seen all of this before on broadcast WWE television. Sable in a thong. Edge and Lita make out. Lita seduces Dean Malenko. Melina uses her feminine wiles to convince Batista to forfeit a match. There’s all manner of WWE superstars making sexual innuendos. And, of course, there is a segment featuring the turbulent on-screen relationship between Stephanie McMahon and Triple H, well, because, they are the bosses now and production has to stroke their egos some more.

This all makes one wonder why the series is called Too Hot for TV to begin with when every segment already aired on WWE television in the first place and to anyone who watches Game of Thrones, Outlander or any of cable television’s current offerings, Too Hot is child’s play, really.

As he takes us through some of the WWE’s most heated relationships including Sable and Marc Mero, Edge and Lita, Hunter and Stephanie, Mark Henry and any woman with a pulse, Jerry Springer, an “expert in all things love, betrayal and of course shocking sex scandals,” also takes the time to poke fun at Billy and Chuck, and their same-sex wedding. 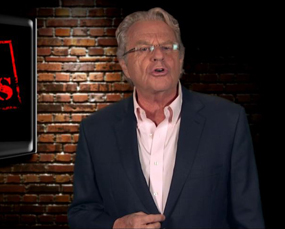 It seems someone forgot that GLAAD (The Gay & Lesbian Alliance Against Defamation) was consulted on the angle and claimed afterwards it was brought in under false pretenses when the relationship was revealed to be nothing more than a publicity stunt. Billy and Chuck never came out and never wed on WWE television as was originally proposed. Thanks for bringing that up again, Jerry.

Springer winds up the 30-minute mind-numbing rehash with his trademark final thoughts.

“Beauty is in the eye of beholder and who are we to judge?” he philosophizes.