MONTREAL – The popular NCW Femmes Fatales promotion has undergone some changes in recent months, but the show on Saturday night proved that there’s always a chance to come home again.

Injuries and absences forced new booker Pat Laprade — the author and contributor to SLAM! Wrestling — to scramble at the last minute to re-gig the card.

The result was a main event with a No Disqualification Elimination Triple Threat Match for the Femmes Fatales International championship, with champion Courtney Rush defending against Saraya Knight (mother of WWE Diva Paige) and former champion LuFisto, who was also part of the original founders of the Femmes Fatales idea. 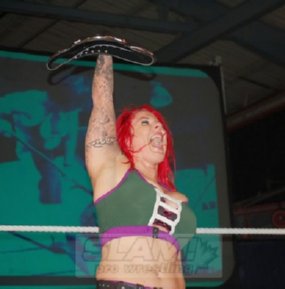 Knight and LuFisto have had many battles over the last few years, including in New England over the WSU title. As for Rush, she has been undefeated in the promotion over the last four years, claiming the title back on August 16, 2014.

So the Bruxelles Center in Montreal was ready for a war, and got one.

One moment that had the fans in awe was when Rush had Knight in a tombstone position on the second turnbuckle only to see LuFisto grab Rush from the back and execute what many called the electric chair drop with both Knight and Rush in her arms. To the surprise of all, the champion was the first to be eliminated. In the end, LuFisto got the best of Knight, but only after giving her three solid chair shots to regain the belt she once had.

The rest of the show was solidly entertaining, featuring the normal mix of homegrown Quebec women wrestlers and imported stars.

The next NCW Femmes Fatales show will be on August 1st.