Ring of Honor Winter Warriors Tour: This is wrestling

ATLANTA – With the recent backlash the WWE has had with their last several PPVs, many fans are clamoring for an alternative wrestling show. Right now, my suggestion would be to see the next time the Ring of Honor promotion comes nearby because Saturday’s Georgia stop on the ROH Winter Warriors Tour was a spectacular showcasing of some of the best professional wrestling in the world today. 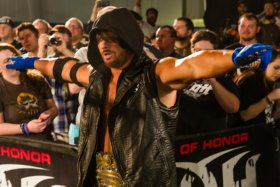 The Showcasing of Talent

Forget title defenses. Forget storylines. For three-plus hours at the North Atlanta Trade Center, the Ring of Honor wrestlers put on a wrestling clinic that definitely gave the fans their money’s worth. Because this event will be available on ROH’s video on demand service, this report is going to be less on the actual outcomes of the matches and more about the general feel of the evening.

This being my first Ring of Honor live show, I wasn’t exactly sure what to expect. I’ve been to other indy wrestling promotions, but nothing with this type of fan support. With a crowd of at least 1,200 people occupying the event, I knew this was going to be a very appreciative group of fans as the majority of them were waiting in line at least an hour before the doors opened. I arrived just when the doors opened and it took 35 minutes for me to get inside the building.

The first part of the show had more of an emphasis on the cruiserweights. I lost count of the number of times in the night the fans chanted either “This is awesome!” or “This is wrestling!” because it was always correct. The best example of the smaller wrestlers was the match between Delirious and “Reborn” Matt Sydal. They tore the house down with their high-flying attacks and set the tone for the rest of the night.

The Growth of Moose

Moose Ojinnaka, who I first met last year at Tulane University when he was still in Dragon Gate USA, was very impressive. I’ve never seen a 300-pound man land a dropkick on an opponent who was on the top turnbuckle before, but Moose nailed ACH with that move just like a cruiserweight would. Of course, being a former Atlanta Falcon, as well as having former Falcon teammate John Abraham in his entourage, meant he got a hero’s welcome even if he is technically a heel right now.

As far as the clashing of styles go, this match was probably the best because it featured Moose’s physical style which included him swinging ACH back and forth between the guardrails and ACH’s aerial moves and his refusal to lose. Even though this was a homecoming of sorts for Moose, who had lots of fans show up, he didn’t want to miss the matches that followed his as he made sure he could catch the remaining action for the rest of the night.

According to Moose, that camaraderie is par for the course regarding anyone on the roster. “Ring of Honor is like a family to me,” Moose said following his match. “Other promotions once I was done with my match I’d head out the building, ready for the next town. But not here. We all want to give each other support.” 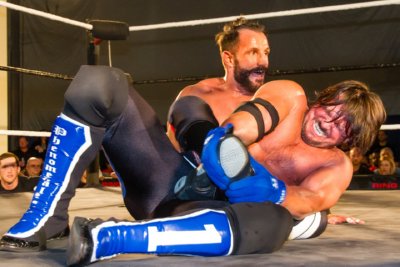 Bobby Fish and AJ Styles struggle for supremacy on the mat.

The semi main event was a champion vs. champion match with ROH tag team champ Bobby Fish against IWGP Heavyweight champion (and Georgia’s own) AJ Styles who just won his title on February 15. While this match did feature all the spots you’d expect these two men to showcase, to honor AJ’s Japanese-based title, the two men spent the majority of the match using strong-style puroresu tactics. It was the first time I’d ever seen that style live and it was impressive to see both Styles and Fish hit each other with everything they had. While the hometown Styles came away the victor, both men had a tremendous showing. After the match, AJ grabbed a mic to thank the fans and say that he’d love nothing more than to defend the IWGP against anyone, anytime here in the state of Georgia. Let’s hope that becomes a reality soon. 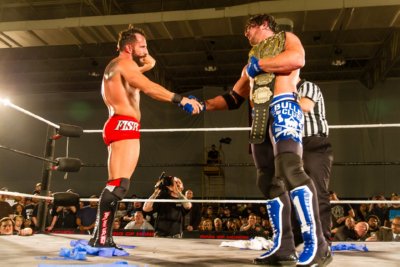 Bobby Fish and AJ Styles shake hands after their match.

The main event of the night was an Armageddon Two out of Three Falls Tag Match featuring the Kingdom and the Briscoe Brothers. For the non-hardcore wrestling fan, this could also be known as a Three Stages of Hell Match as each fall was contested under different rules. Fall one was a regular tag match. Fall two was a Tornado Tables Match and fall three was a Falls Count Anywhere Match. Without trying to use hyperbole, this was one of the better tag matches I’ve seen in quite some time. While the North Atlanta Trade Center may not have had the usual “backstage” segments in a hardcore type match, these four men made the absolute best of their environment.

By the conclusion of the tag match, it didn’t really matter who came away victorious, because in the end, the fans were the true winners: something every wrestling promotions should always strive to accomplish. It’ll be a few months before Ring of Honor returns to Georgia, but now that I’ve had my first taste of it live, you can bet I’ll be looking forward to the promotion’s return in the near future.