Tito Carreon might just be the nicest guy I’ve ever met in pro wrestling, and learning of his passing Sunday night makes me sad — just as it made him sad sometimes to put pen to paper, and draw caricatures of some of his friends from the past.

He was a regular at the Cauliflower Alley Club reunions through the years, and I got to know him pretty well there and on the phone after. 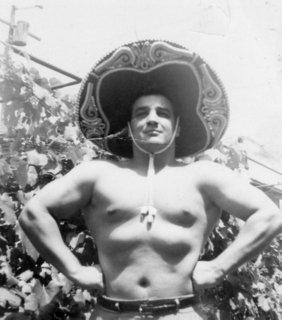 Not long after he turned 80, in 2009, he told me about some of his colleagues that he kept in touch with — Ella Waldek, June Garibaldi (the widow of Leo Garibaldi), Ricky Torres’ wife, Sweet Daddy Siki, Cowboy Bob Ellis.

“What I’ve been doing is sending them caricatures of them for their own personal use,” he told me. “I’m drawing these guys and I have to stop. I get really emotional sometimes because they were my buddies or I wrestled against them, things like that. It can be a sad time when I draw. I have a lot of memories from these oldtimers.”

Not just memories either; Carreon had a lot of heart, a lot of empathy, a lot of love.

“My conscience is bothering me a little bit,” he told me another time about his drawings. “I told these guys that if they have a big nose, you have to exaggerate that big nose. It’s a caricature. They look at them and go, ‘Oh my God.'”

His son, Gary Carreon, posted about his father’s passing on Facebook: “last night around 8:30, a strong wind hit the house, because it didn’t let off, it caught my attention, the front door blew open and we saw thunder, wind and hail….. this went on for a couple of minutes then ceased as if nothing ever happened… this morning I found out that my Father passed away…. last night…. my Father was a creative genius, we’ve inherited his athletic, artistic,musical, writing and comedic traits, you see it in us and in our children… rest in peace Dad and all is forgiven…love your son…..”

Carreon had a long battle with cancer. Back in August 2014, his daughter, Ramona, put out the call that her father didn’t have much time left, and might not make it to his birthday, September 1st. He did and then some.

One of the old friends that called was Siki, as the two started out wrestling together in New Mexico for Bill Olivas, a.k.a. Elephant Boy. “He was really happy to hear from him,” Ramona said of Siki’s call.

The actual wrestling career of Tito Carreon is pretty well covered in our 2007 feature on him, that coincided with an honour at the Cauliflower Alley Club — Tito Carreon reflects back on 15-year career.

He was never a major star, never a top-of-the-card guy.

But outside of wrestling, Carreon made a difference.

Channeling his artistic side, he designed signs, including employment for many years with a department store; his own company followed.

Then there was the gym he ran for about 15 years, shaping bodies and training wrestlers.

He later opened an outreach centre to keep kids away from gangs and drugs in Hillsboro, Oregon; it only lasted a few years. “But the city was so bad. They wouldn’t help you. They knew what we were doing, but it was very political,” he complained. “There were gangs and kids and drugs out there, and I tried getting as many as I could to come work out, but I couldn’t get any sponsors.”

He came by the charitable work honestly, having become a Born-Again Christian.

“God came into my life and it’s just a fantastic experience. That’s what has kept me happy all these days; no matter what I have, whether I have everything or anything, I’ve got the Lord in my heart.” 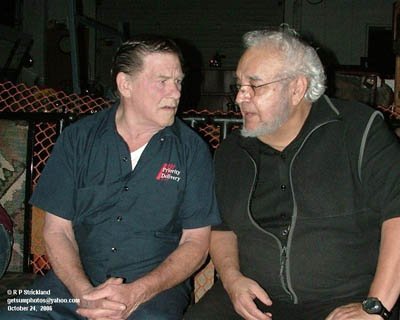 His wrestling shows were designed to showcase local talent and naturally, he was one of them.

Carreon last stepped into the ring when he was 73 years young, and loved to tell the story of how he was egged on to do it.

“Okay, but give me two weeks to get on the treadmill at least!” he recalled.

It was a tag team match, lucha-style, and he pulled off a plancha — really!

“They’re all doing it, they’re all doing it. They’re all getting up and looking at each other, and I’m on the apron and everybody’s screaming — 73 years old! Oh God, here goes! And I dove on top of them. Wham! They I got up, checking every part of my body … the guys all remember that. I did a plancha at 73. My God, I couldn’t believe it. I don’t know why I did it. I guess, sometimes what happens is, you lose yourself … I forgot that I’m old and can’t do that anymore.”

Now Tito won’t be calling anymore either. Many, including myself, will miss his calls.

He once told me: “It was like a Cinderella story that I’ll always remember for the rest of my life.”

Tito, I’ll remember you for the rest of my life too. Rest in peace, my friend.