There aren’t too many guys that would attempt to do a plancha off the ring apron at 73 years of age. That didn’t stop Tito Carreon though, as he hurled himself from a spot of relative safety and landed on top of some much younger, more agile wrestlers.

In so many ways, that plancha was representative of Mr. Carreon’s career. As he said it, “To be great, you’ve got to be spectacular. You’ve got to have that fire.” There was no doubt that Tito Carreon, 73-years old at the time, still had it.

At 77, he’s a little older now and there’s not likely to be any more planchas in his immediate future. But that doesn’t mean Tito’s done with wrestling — or that wrestling is done with him. In fact, Tito is being honoured at this year’s Cauliflower Alley Club Reunion being held in Las Vegas. Tito sees it as a kind gesture and — as he sees it — a surprising one. 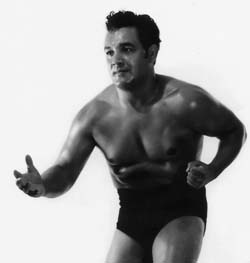 “I feel flattered to be honoured this way,” he said in an interview with SLAM! Wrestling. “I am very thankful, especially considering there are many others who have passed away who were weren’t honoured like this.”

He’s actually more nervous than anything else. It’s been some years since he addressed a crowd of more than a few dozen people. “I used to go in the ring and do those interviews, but it’s been a long time,” he said, laughing. “So I am a little nervous about getting up and saying something.”

He could talk for hours though, if he wanted to. His wrestling career spanned more than 15 years (a chronology that does not include that plancha). In that time, he wrestled and worked with some of the legends of the wrestling industry — men like Buddy Rogers, Sweet Daddy Siki, Miguel Perez and even Vince McMahon Sr. “I learned from all these guys,” Tito reflected, “and took the best of what they had to teach me.”

It was an education he had never planned to have. As he said it, “I never made up my mind to become a wrestler; it just happened.” He liked wrestling well enough and even admitted that as a young man, he would head down to the local appliance store with one of his friends to watch the wrestling that would be shown on the TVs there. “I used to watch Buddy Rogers on TV,” he remembered. “Little did I know that two years later, I would be wrestling him.”

This was back in the early 1950s and it was then that Tito Carreon decided to open his own gym in his hometown of Gardena, California. And it so happened that one day, a wrestler that wanted to workout stopped by this same gym. Carreon helped the wrestler train and said or did something that caught the attention of the wrestler. The wrestler subsequently talked to his promoter and told him, “There’s a Mexican you’ve got to have in here.” The promoter promptly called Tito and invited him into the world of wrestling.

“I thought it was a rib,” Tito recalled. But he was intrigued enough to give wrestling a try and it wasn’t long before he was standing across the ring from Buddy Rogers, that man he had seen on the TV screen in the appliance store. He was also a man Tito would come to respect deeply. Before then, though, he had to pay his dues and put some matches under his belt. And by his third one, had decided not only to try and excel at this thing called “pro wrestling” but to embrace it as well.

“I decided I wanted to get over, so I did all my stuff — flying scissors, kip-ups, dropkicks, even flying headbutts — everything I could think of doing,” Tito said. “The people bought it. They loved it. As a matter of fact, I think the first time in L.A. that it ever happened, the Mexican people gathered around the ring, put me on their shoulders and carried me back to the dressing room. Is that something? They wouldn’t even use me, then the first week I’m back, then the promoters are saying, ‘Yeah, I want him in my town!'”

Tito couldn’t even believe what was happening but he remembered how those early moments changed his life: “It was like a Cinderella story that I’ll always remember for the rest of my life.” During his next match, when the crowd started to roar, he thought someone had fallen off the balcony or something, but then realised the truth: “They were cheering for me.”

It wasn’t always like that of course. Fans once threw eggs at Tito during a match with Sweet Daddy Siki. Local newspapers even picked up the story. “I had so much fun with my wrestling,” Tito said. “The sport was so good to me. It added something to my life. I don’t know where I would have been without it.” He laughed again. “I might have ended up being a regular person with a regular job.”

As it turned out, he wasn’t one of the regular ones, but he’s honest enough with himself to volunteer that he wasn’t the best at his job, either. “I’m very humble,” Tito expressed respectfully. “I think I held my own, and I think I had a lot of good matches, but you have to remember that the results of how good or bad you are is determined by the response of the fans. There are a lot of great fans out there, who will scream their heads off and even call you names. Which was great, because the more names they called me, the better I wrestled for them.”

He may not have been the best, but that doesn’t mean he was any less proud or that he didn’t work as hard as the guys with all the spotlights and world titles. “I always said if you could get in the ring and wrestle with a broomstick, you can wrestle with anybody,” Tito said, referring to wrestling with the smaller rookies. “That’s when you know you’re a real journeyman — when you can wrestle anyone and get a good match out of it.”

There were many good matches in Tito’s career but it’s a match with Buddy Rogers in New Jersey that ranks as one his favourites. During that match, Rogers was injured and started to bleed. He suddenly left the ring and was counted out. “I thought I was world champion,” Tito recalled. “You can’t win the belt on a countout, but for half an hour there I thought I was the champ. That was the nearest I ever got to being a world champion.”

And when it came time for Tito to hang up his boots, he did so gracefully but did not retire to a life of quiet solitude. Instead he kept working, opening an outreach center for street youth and working as an artist of sorts, opening his own sign business and working for a major department store making signs for them as well. In these later years of his life, Tito is also said to be working on a cartoon book and continues to make signs.

But he’ll never forget his time wrestling and what it gave him. “It stays with you, you know?” Carreon said. “You live with it, you remember it. You’ll see something and it reminds you. I see some of the stuff some of these wrestlers do and I think ‘My God, I did that?'”

He lived with the sacrifices as well, the time on the road spent away from his family. “I love wrestling, but I don’t think people realize how tough it is,” he shared. “I was one the road most of the time and had to travel long distances to towns where there would be crowds of only 20 people. One wrong move and your back or your neck is out. It’s a tough profession.”

Naturally, he’d do it all over again. “I never regretted it,” Tito said, “not one time. I learned a lot about myself and about life in general through wrestling. It teaches you so much and you can apply that knowledge throughout your entire life.”

Tito’s wrestling career was an interesting one, and it transformed him from a small 135-pound kid just out of high school to a 205-pound Goliath who could do flying headscissors and dropkicks in the middle of a wrestling ring. The sport transformed the quiet, humble man into someone who was told repeatedly that he stole the show yet again. It was a sport that changed him irrevocably and forever; just the way he wanted it. 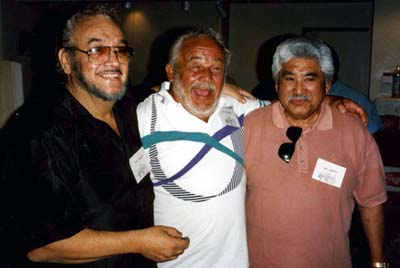 Which brings us back to that plancha. At 73 years old, Tito thought his days in the ring were behind him, but then he was egged on to try it just one more time. Maybe it was those memories of long ago, or just the blood of an athlete that coursed through his aging veins. Whatever it was, Tito decided to step in the ring once more, telling those who had suggested it in the first place, “Just give me two weeks to get on the treadmill at least!”

His last match was a tag team match, and he watched a spot where everyone was doing planchas. Somehow, the other wrestlers managed to convince Tito to try one. “They were all doing it,” Tito remembered. “They were getting up looking at each other and I’m on the apron and everyone’s screaming. I’m on the apron and everybody’s screaming. 73 years old! Oh God, here goes! And I dove on top of them. Wham! Then I got up, checking every part of my body. The guys all remember that. I did a plancha at 73. My God, I couldn’t believe it. I don’t know why I did it. I guess, sometimes what happens is, you lose yourself … I forgot that I’m old and can’t do that anymore.”

But he did it anyway, and only because that’s how much he loved wrestling and because there was still some of that fire dwelling deep within him. He’ll be honoured at the Cauliflower Alley Club Reunion in Las Vegas this year but for all those years that came before, he just wants to be remembered as a hard-working man that loved what he did.