When Barbi Hayden captured the NWA women’s championship last January, she vowed to be a fighting champion. 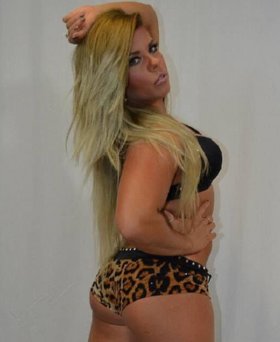 Official records are incomplete, but it is believed that this will be the first time the NWA women’s title has been defended on Canadian soil since September 2007, when Awesome Kong defended the title against Veronika Vice.

Hayden, 24, said one of her top goals for 2015 is to expand her horizons and to take her championship across international borders.

“I was to take as many out-of-state and international bookings as possible, and continue to be a traveling and defending NWA women’s world champion,” Hayden said.

A native of College Station, Texas, Hayden was forbidden to watch wrestling as a young girl; the “Attitude Era” was too risqué for her parents’ liking. Of course, forbidden fruit always tastes sweeter, so she managed to watch wrestling on the sly. She became a fan of Mickie James, and was inspired to try her hand in wrestling.

With the encouragement of her boyfriend, wrestler Houston Carson, Hayden began training in the summer of 2009, spending more than a year working under America’s Academy of Professional Wrestling founder George De La Isla in Austin, Texas. After more than a year of conditioning and learning the ropes, she made her pro debut in December 2010.

Barely three years later, Hayden became the female flagbearer of the National Wrestling Alliance, beating Kacee Carlisle with a draping DDT off the top rope to become the 23rd woman to be recognized as NWA women’s champion.

Hayden says that title win was a career-changer.

“I get a certain level of respect that I didn’t get before, even though I work just as hard as I always have,” she said. “I have had numerous title defenses in high profile matches, which has brought up my ranking in the women’s division, and my exposure overall.” 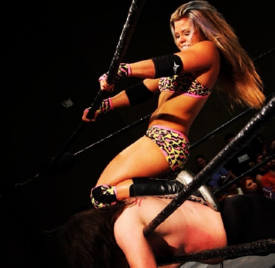 In the ring, Hayden is a versatile competitor who mixes strong, mat-based submission grappling with a power-based high impact offense. She has competed as both a fan favorite and a brawling rulebreaker, depending on the circumstances, and has proved to be equally effective with both styles.

In addition to her formal training with De La Isla, Hayden said she also received further tips and guidance from Lance Archer and Funaki. Archer said that Hayden’s work ethic is one of the things that sets her apart.

“As a competitor, Barbi is one of the better female performers in the business today,” Archer said. “She is always trying to improve in all areas, which keeps her moving forward.”

While the January 31 match against Malone will be Hayden’s first foray into Canada, she has already made two tours of Mexico, and is looking to schedule another Mexican tour in the near future. 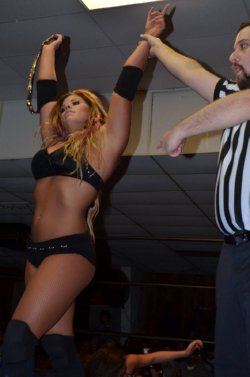 When she’s not on the road wrestling, Hayden works as a personal trainer at Gold’s Gym. She is a spokesperson for Neon Sport supplements, Dreaming Elegance (a California-based clothing company) and Isolator Fitness.

She is also the proud mother to two “fur-children” — her cats, Molly and DeeDee. “My life revolves around my two kitties,” she said.

In addition to working to help re-establish the prestige and prominence of the NWA title, and to introduce it to new fanbases, Hayden also hopes she can help change the perception of women’s wrestling.

“People often have this preconceived notion that women are less entertaining than men, so they go in with a negative mind set,” she said. “That encourages me to give everything I have to win those people over and entertain those fans.”