The scoop on Jericho’s busy life

After the busy year Chris Jericho had in 2014 — wrestling, acting, performing with his band Fozzy, writing his newest autobiography, hosting his podcast — it’s no wonder he planned to do nothing over the holidays. Even if it seems like the complete opposite of his glamorous endeavours, like cleaning up after the dog. 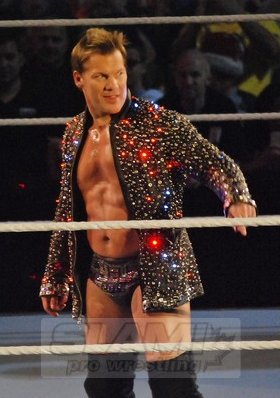 Chris Jericho at Raw in Detroit in December. Photo by Brad McFarlin

“It’s a fantasy life when you’re on the road,” he told SLAM! Wrestling at an appearance last month at Woodbridge Heroes, a comic and hobby shop in Woodbridge, Ontario. “To get back home for the holidays, and get back in the groove of taking out the garbage and picking up dog poop, it’s a different trip. But that’s what I do when I’m home — all I want to do is to hang out with my kids and my family.”

“It’s great,” he continued, “because I’ve been on the road quite a bunch since … well, since forever. But, especially since about June when I went back to WWE. It was a pretty busy schedule in June, July, August, then we went on tour, and when we came back from the tour, I was on a book tour, and then I had another tour with WWE for about a week, and then finished three days with Fozzy. It’s been a pretty busy few months, so I’m looking forward to going home and doing nothing.”

With WWE’s Royal Rumble pay-per-view imminent, fans might think that that those plans of doing nothing may change in the coming weeks. If so, Jericho is remaining mum about the topic, noting that he will be returning to in-ring action, but insisting that he wont’ be appearing on-screen.

“I’m going back in January and February to just do live events — no TV, just house shows,” he said. “(To do only live events) was my choice. I had some time off (between Fozzy tours), and I thought it would be fun to go back (on that schedule). It’s like I’m the anti-Brock Lesnar,” he joked, in reference to Lesnar’s schedule which keeps him off the road and exclusively on TV and pay-per-view.

And given his many other interests, it remains to be seen how long he’ll even wrestle on house shows — though he is quick to point out that he isn’t entertaining a full retirement from the ring just yet.

“I know that some fans would like to just seem me wrestle until I explode in a puff of dust — that won’t happen. I think everybody knows that wrestling is less and less of my life, and that my days of being a full-time wrestler (are over). But as long as I feel that I can still contribute, and can still perform at the highest level that I’ve set for myself, then I’ll go back from time to time.”

Diversifying himself across a number of creative ventures, which helps avoid him burning out on any one thing, has always been Jericho’s plan, even before he started wrestling.

“When I was a kid,” he recollected, “I wanted to be in a rock star and I wanted to be a wrestler. And I knew I’d write a book some day, because I went to journalism school in college (Red River Community College in Winnipeg). I took Creative Communications with a major in Journalism. I used to work at the newspaper, the Winnipeg Sun as a cub sports reporter, writing about CFL fashion shows, swim meets, and — the most surreal thing I ever wrote about — a tiddlywink contest. I realized pretty early on that I didn’t want to be the one writing about them, I wanted to be the one people were writing about.”

Getting into wrestling was the first of the childhood goals he accomplished. But, no matter what level of success he’s enjoyed, Jericho never wanted to pigeon-hole himself in that role alone.

The leap to fronting his band Fozzy, acting — he was in an award-winning webseries called But I’m Chris Jericho, and another one that he filmed for Comedy Central debuts in February — podcasting, and writing are all extensions of that drive to entertain.

Which is certainly true about his newest book, The Best in the World – At What, I Have No Idea. With this book, Jericho enters into rare air of the celebrity with three autobiographies — though it falls short of fellow wrestler Mick Foley who has written four.

“I don’t know if it’s really a race, but I guess Mick finally beat me at something,” he joked, pointing out that the impromptu pinfall that he allowed Foley to get on him at Foley’s 2013 induction into the WWE Hall of Fame “doesn’t count… that was unsanctioned.”

While he’s not competitive about numbers, Jericho’s main concern is whether or not the book holds up in terms of quality. The final outcome is worth all of the time and effort that goes into writing it.

“It’s a long process to write a book,” he explained. “It takes the better part of a year, and that’s working on it pretty much every day for hours on end. You have to sit down and think to yourself what you’re going to talk about, and think about, ‘will this story work, will that story work?’ Then write out very basic forms of the stories, and then sit down and start writing it. The first draft takes about six months, and then each draft afterwards takes about half that.”

“There is a lot of checking, and fixing, and moving. And sitting for hours thinking should this be ‘this’ or ‘the’, ‘and’ or ‘but’. You drive yourself crazy. You don’t know if it’s good or bad anymore because you just over-analyze everything.”

A Christmas morning, one would guess, with the family… and no dog poop.