NXT’s fourth two-hour special goes down on Thursday. The card may only have four matches, but each one looks like it could steal the show. With the renewed NXT being Triple H’s brainchild, he answered questions today about the upcoming special, as well as the future of NXT itself. 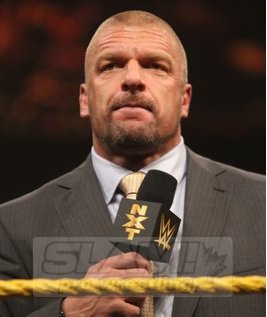 Triple H takes to the microphone at the NXT event in April 2014. Photos by Bill Otten, B&B Productions.

Naturally, Triple H, under his daytime gig as Paul Levesque, WWE’s Executive Vice President, Talent, Live Events & Creative, has high expectations of R Evolution and believes this is going to be a great show.

The previous special, NXT Takeover: Fatal 4 Way, aired in September, and included new tag champions, an emotional women’s championship match, and one of the better fatal four-way matches in recent memory. Given all that, R Evolution certainly has a lot to live up to.

The Raw match with Charlotte and Natalya

Just like with Fatal 4 Way showcasing some of its talent on the Raw before the special, this week’s Monday night show featured NXT Women’s Champion Charlotte compete against Natalya. What was unusual about it was the match was fairly short, about two minutes, and ended with the Women’s Champion losing cleanly to someone she had beaten for the title several months ago.

It was a questionable decision and Hunter had no problem addressing the reasons for that type of match. In short, because the show is live, things change on the spot. “I would have loved to give them the time I gave them at the NXT Takeover special to showcase what they can do,” Hunter said. Of course, the entire point of having these women on Raw was to get more eyeballs on the product and to promote the special. “As far as the decision of who went over, those decisions are heavily debatable and it is what it is.”

Hunter did say that the next time Charlotte makes an appearance on Raw, she’ll be showcased differently, although that time won’t be for quite a while from the sound of it. While he didn’t outright say this, Hunter seemed to imply that he wanted a different result from the match but the decision wasn’t up to him. Of course, time heals all wounds so hopefully the next time we see ‘Naitch’s daughter, she’ll be more Bray Wyatt than Husky Harris in terms of the booking choices. 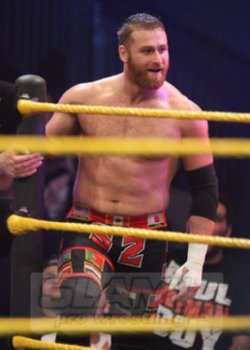 Do think this is the last we’ll see of Sami Zayn?

If you’ve been paying attention to NXT since it debuted on the WWE Network, one of the constant themes has been Sami Zayn’s inability to win the big one, despite him putting on tremendous matches. Neville seems to always get the better of Zayn. Sami decided to up the ante a few weeks ago when he announced that if he couldn’t beat Neville for the NXT Championship this time, he would voluntarily retire.

“I’m looking forward to an epic encounter between Adrian Neville and Sami Zayn for the NXT Championship,” Hunter said. “Great chemistry in the ring and these two guys are ready to take it to the next level and so ready to make their impact on the WWE in general.”

Regarding that next level, when will that take place? Hunter wouldn’t give an exact time. “Strategically it comes down to where do they fit in on Raw, where do they fit in on Smackdown,” Hunter said. “How do you move them onto the other shows so they can be exposed in the best way possible? No matter how they’re put in, I want these guys to be placed where they can succeed.” Hunter did say that he hopes within the next six months both of these men will be up in the main roster.

The Debut of Kevin Owens

At Fatal 4 Way, KENTA (Hideo Itami) made his official NXT debut. This time, the newest acquisition making his first appearance in WWE will be Kevin Owens (formerly known as Kevin Steen). The promos that WWE has churned out on him, especially the last one where he lists all the wrestlers he’s worked with who’ve been called up to the WWE before him, was powerful because it shows this is a guy who is not going to let his chance in the big leagues pass him by without a fight.

One might question why someone with Steen’s, sorry, Owens’ 14-years of professional wrestling experience would need to work his way up from NXT rather than simply be put on the main WWE roster. For people like Owens, Itami and Finn Balor, Hunter said it’s to give these guys time to adapt to the WWE style. Hunter likened it to an athlete having to learn a new playbook, you may have the general idea of how things work, but there’s a reason no two teams play exactly the same way. “It’s getting up to speed on how we do things,” Hunter said. Specifically noting “There’s a difference in the way the crowds react. The way they react at Full Sail compared to Madison Square Garden.”

Of course, the challenge for someone with Owens’ history is how to balance his previous accomplishments with whatever the future holds for him in this new company. This is really what NXT is all about: turning these guys into stars so by the time they make the jump to the main roster, they’ve been exposed to as many people as possible. “You want to bring in somebody who has that level of experience,” Hunter said. “You don’t want to make it like that never happened. You want to give him the showcase to show what he does. At the same time, you want to make it a WWE product.”